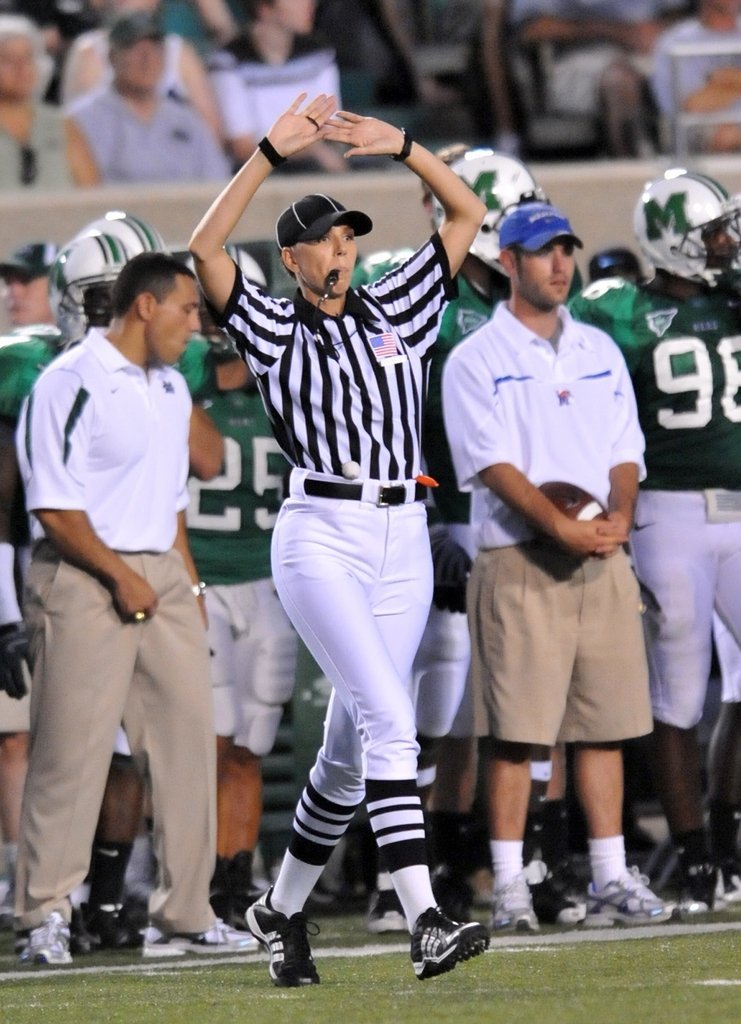 Instead of waiting for opportunities to be handed to us, we need to create them. We need to advocate for ourselves.

On April 2nd, 2015, at 10:47 a.m., Sarah Thomas received a historic phone call. She saw the 212 area code (New York City) and prayed it was the call she had been anticipating. It was. Dean Blandino, the NFL vice president of officiating, was on the other end of the line. Sarah, an extremely experienced football official in her own right, listened intently. Blandino acknowledged Sarah’s hard work over the past two decades and then confirmed that she was being appointed the first full-time female official in the NFL. Over the years, Sarah had become a pioneer on the football field and once again, she would go where no woman had gone before. Sarah, who always had an authoritative way about her, this time was stunned and speechless.

Sarah’s journey began in 1973 when she was born in the small town of Pascagoula, Mississippi. She lived there with two sports-loving brothers who influenced her passion for athletics at a very young age. Sarah was a self-proclaimed tomboy. She favored basketball and, since there wasn’t a girls’ team at her school, she played with the boys. It didn’t bother Sarah that she was the only girl; she just wanted to do what she loved. This mentality would set the tone for her endeavors throughout life.

Sarah poured her heart and soul into the things she cared about, especially basketball. As a result, the young competitor excelled in the sport and earned a scholarship to Alabama’s  University of Mobile. In three collegiate seasons, she collected 779 points, 411 rebounds, 108 assists, and 192 steals, which ranked fifth in the school’s record book.

After graduating from college, Sarah’s love for competition still burned from within. Therefore, she joined a team that challenged her abilities – a men’s basketball team in a Mississippi church league. Three years later, Sarah’s participation on the team came to an end. A pastor from the organization told her that, because she was female, she could no longer play.  Sarah, now 23 years old, was extremely upset and called her dad. “What am I going to do? I have played sports my whole life and because I’m a girl I can’t play in a men’s league?”

About a month after Sarah left the church basketball team, she had an opportunity to do something new. She was having a conversation with one of her brothers, who was about to go to a football officials’ meeting. Out of curiosity, Sarah asked, ” Can girls do that?” Her brother hesitated for a moment and said, “I guess so, Sis. Be there at 6 pm and don’t be late.”

Sarah showed up at the meeting and received several perplexed stares from a room filled with men. Sarah recalled the event: “There was a gentleman that was talking at the front of the room. He completely stopped talking and just watched me. I looked at him and said, ‘Is this where you become a football official?’ He said a few choice words to me. I thought, ‘What have I gotten myself into?’ But I’m so competitive, so I said, ‘I’m going to try my hand at this’.”

Even though Sarah had never played the game before, she confidently believed that she could learn this new craft. She was coachable and eager to learn. She also possessed the courage to show the world what a woman could do. She started her officiating career at the lowest level of the game, peewee football, and worked her way up to the high school level by 1999. Sarah devoted all her spare time to improving her skills in a male-dominated industry. She believed that “Instead of waiting for opportunities to be handed to us, we need to create them. We need to advocate for ourselves.” This mission would not be easy, but Sarah’s dedication to it, along with her refined sideline demeanor, resulted in continuing promotions up the referee ranks.

Eight years later, that same level of dedication earned Sara an even higher level of officiating. Joe Haynes, a retired Southeastern Conference and NFL official, had been admiring Sarah’s work ethic at the high school level.  He called up the supervisor of game officials for Conference USA, Gerald Austin, and told him that he had someone ready to take on the collegiate level.

“Gerry, I’ve got a high school official down here in Mississippi that you need to take a look at, somebody who’s ready for college football.”

“His name is Sarah.”

Gerald interviewed Sarah over the phone for about 45 minutes. That was how long it took Sarah to persuade him that it was time to push the gender boundaries in college football.  Shortly after their conversation, Sarah was hired as the first woman to officiate a major college football game. She would then move on to be the first female official in a Big Ten stadium, and then the first to officiate a college bowl game. The ground-breaking news of Sarah’s new role had a tremendous impact on and off the field. Women began applying for officiating jobs, which was something they had never done before. Sarah didn’t necessarily set out to be a gender role model, but she was honored to have that title:

“Women don’t have to listen to their inner critic and hold themselves back. They can unleash themselves and reach their best potential if they put their effort into it.”

Sarah worked at the collegiate level for almost a decade. Then she was hired to tackle the biggest football stage in the world, the National Football League. Although the NFL was the most significant and competitive level of the game, Sarah was never intimidated. Quite the contrary, she stood out as one of the best in the league. Officials and players alike respected her instantaneous decision-making and confidence. “She knew exactly what she was doing — if guys tried to challenge her, she didn’t back down,” declared former NFL wide receiver, Steve Smith.  Of course, not everyone supported Sarah’s position as a female on the field. Nevertheless, she didn’t let her critics bother her:

“They’re entitled to their opinion. But, if mentally and physically a woman can do a man’s job, then I don’t think gender should hold her back.”

Each game taught Sarah new lessons and she continued to grow from each experience. Therefore, Sarah continued to advance in the league. For example, she became the first female to officiate an NFL playoff game on January 13th, 2019.  And, in 2021, Sarah reached the pinnacle in her profession when she was named to the 7-person crew that officiated Super Bowl LV between the Tampa Bay Buccaneers and the Kansas City Chiefs.

Sarah has become one of the most recognized officials in the franchise. Still, Sarah’s notoriety hasn’t changed her attitude on the playing field, and she has vowed to do the job as long as she is capable. Sarah’s receptiveness to learning landed her in the NFL but her transition to the top has been acknowledged far beyond football.  She inspires women of all ages to pursue their passion and achieve their dreams. Like a true trailblazer, Sarah has opened the doors for women to find a place in officiating.

Sarah Thomas is one of the 144 “Wednesday Role Models” featured in the Student Athlete Program. This program is designed to improve the character, leadership and sportsmanship of high school athletes. To learn more about this program and how you can implement it in your school: