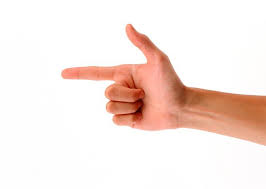 As most of you know, I have 4 daughters (ages 8, 6, 4 and 4). Most mornings my kids are pretty tired and come to the breakfast table in a coma-like state. It isn’t very long before I say to my youngest, “Hey Tess.” When she looks at me, I unholster my gun and shoot 6 good shots of air into her chest with my loaded index finger. Unresponsive to these mortal wounds, she empties her 6-shooter into my flesh. Within seconds her posse of sisters begin shooting me with bazookas, sawed-off shot guns and machine guns until I fall out of my chair onto the cold hard floor. The Hoedel gang high-five each other that Dad is dead and then proceed to devour their oatmeal, peanut butter toast (organic, of course) and waffles, but with a little more pep in their step.  Mission accomplished!

This is fun, innocent, playful, right? Not so fast my friend. If this happened at any number of schools, playing with imaginary guns is… well, against the law.  It could land you in the county jail (suspended for several days) or the state penitentiary (expelled from school). I will provide you with several cases that prove this point below. 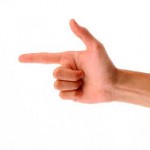 Common sense tells us that this is not a treat

Earlier in March of 2014, a 10-year-old boy was suspended for taking out his finger and pointing his imaginary gun at another child. Nathan says he and his friends were just messing around. The principal suspended the boy for 3 days. www.youtube.com/watch?v=UyuGEMl2uYQ

In 2013, 5-year-old Josh was suspended from Park Elementary School in Baltimore, MD. Josh was eating his pop-tart at school when he started nibbling it into different shapes. After forming a mountain, he nibbled some more and formed a gun. He followed that by allegedly saying, “Bang, Bang.” For this offense, he was given a 2 days suspension and all parents received further notice that edible objects should not be used to make threats. www.youtube.com/watch?v=hc25W1-F7Lc

The list goes on and on. Elementary-school children have been suspended for bringing nerf guns and  lego guns to school. Others are being suspended for making a fake gun out of paper. Another child is being expelled for taking target practice against a tree with an air-propelled gun that shoots plastic balls while on his own property as he waited 100 yards away from the bus stop.  Hmmm…

School officials need to exercise good-judgment and common sense when confronted with these childish incidents. No one is in danger. No real threats have been made. No one is being bullied. These are elementary school children and we need to take off our adult glasses and see this behavior through the eyes of children. It’s fun. It’s normal. It’s harmless. It’s appropriate. It’s called imaginary play. On this issue, we need to call off the SWAT team and just let kids be kids. We expect children to use common sense, logic and good judgment. I think we should expect the same of school administrators who lead these young children.

1. I typically try to present a pro and a con to each blog post. However, it was hard to see the arguments for this kind of punishment.  Can you provide one here?

2. If you were a school administrator making school policy, what rules would you write about imaginary finger guns?