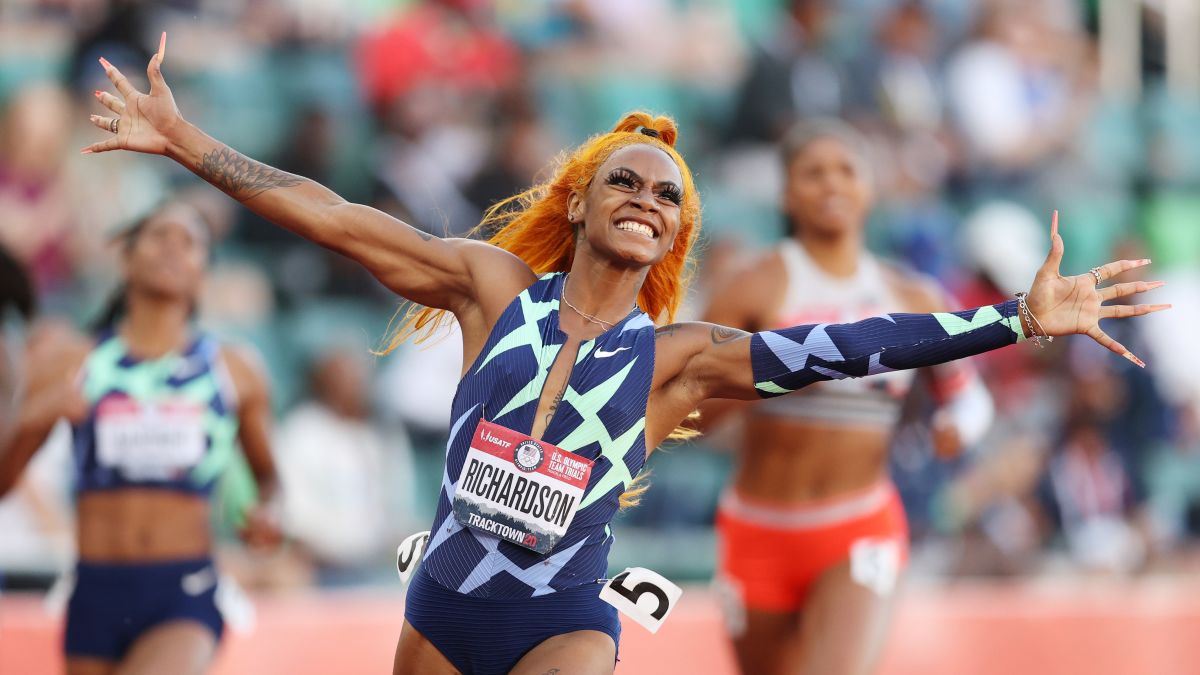 When you watch Sha’Carri Richardson sprinting down the track, she seems free. She dazzles the crowd and dominates the competition. Millions of Americans have fallen in love with her athletic abilities and her irresistible personality. Sha’Carri regularly dyes her hair blond or red or blue, depending on her mood. She wears her hair long and her manicured nails even longer. She has oversized eyelashes. When she crosses the finish line, usually in first place, she spreads her arms wide and showcases her infectious smile.

However, there is an underlying story that is known to few. Sha’Carri and her sister grew up in challenging circumstances in Dallas, Texas. She had no relationship with her father and her biological mother basically abandoned her. “I’m not gonna say she left them,” said Shayaria Richardson, the aunt of Sha’Carri. “But I’m gonna say she left them.” This void created a deep psychological scar for Sha’Carri. “I was always asking myself, what’s wrong with me? If my mother doesn’t want to be around, then I’m pretty sure nobody wants to be around me.” It hurt Sha’Carri to the core and it still does.

Sha’Carri’s grandma and aunt took over the primary parenting responsibilities as she grew up. Her Grandma Betty always tried to affirm Sha’Carri’s self-worth. “Hold on, wait a minute,” she would tell her grand daughter. “You’re always wanted. This old woman wants you, 24/7.” Also, her Aunt Shayaria has taken equal credit in her upbringing, saying, “I’m her mom. I didn’t have to birth her to be her parent.”

When Sha’Carri entered the 3rd grade, she started digging through an old box in the garage. She found a bunch of gold, silver, and bronze medals. When she inquired about them, she learned that they were track and field medals belonging to her aunt. Sha’Carri remembers thinking to herself that she wanted to do that too. So, one day her aunt took her to the track to give her a taste. Sha’Carri loved it. “You wanna be great don’t you,” asked Aunt Shayaria. “Yah, I wanna be great,” was Sha’Carri’s quick response. “Well, then,” said her mentor, “there’s only one way to get there: Hard work, blood, sweat, and tears.”

And so Sha’Carri worked and sacrificed. Track became a major part of her young life. “It’s not that she had to keep running, she wanted to keep running,” said Aunt Shayaria. “That’s her out from everything that she had went through.” Track became a type of therapy for Sha’Carri, and she observed, “Once you in your block, everything disappears and it’s just you and what you love.”

It became fairly obvious that Sha’Carri had talent. After a season-ending injury as a freshman, she entered her sophomore year with something to prove. “She came out and just smashed the competition,” said Lauren Cross, her head track coach at Carter High School. In fact, during her entire high school career, Sha’Carri never lost a 100-meter event. She racked up three state championships in the 100-meter dash, two in the 200-meter dash, and contributed to three state championships in the 400-meter relay. It was a superb high school career and Sha’Carri subsequently committed to run track at Louisiana State University.

Despite Sha’Carri’s success and her extended family involvement, she never fully recovered from her biological mother’s lack of maternal bonding. She was constantly asking herself: “She was supposed to be my world. If you’re not my world, then why am I here? It took me to a very dark place.” Her adolescent years were plagued by periods of self-doubt and depression. This culminated into an attempted suicide in the 11th grade. Afterwards, while recovering in her hospital bed, she asked her aunt if she was going stay by her side. Aunt Shayaria’s response was clear and affirming: “I’m not going to give up on you. I’m never going to leave you.” This unconditional love appeared to transform Sha’Carri’s young life. It gave her  purpose and meaning.

As a freshman at LSU in 2019, Sha’Carri experienced a ton of success. These triumphs culminated in the NCAA Championships when she set a collegiate record in the 100-meter dash. Her blazing time of 10.75 seconds would have won her a gold medal in 19 of the previous 21 Olympic games. Sha’Carri now was preparing to set all kind of collegiate records. But the Covid-19 pandemic all but cancelled her sophomore season. Unsure of how the pandemic would play out, Sha’Carri opted to turn pro and focus her attention on the 2021 Olympic games in Tokyo.

Subsequently, Sha’Carri was the overwhelming favorite in the finals of the US 100-meter Olympic Track and Field qualifying trials in Eugene, Oregon. She stepped to the line — with her fiery red hair, outrageous eyelashes, and long gold fingernails — the gun fired, and she did not disappoint. Sha’Carri breezed to the front and pointed to the clock as she confidently crossed the finish line. After conducting a short interview, she climbed into the stands to embrace grandma Betty. Her grand plan was falling into place; to bring a gold medal home to America.

Shortly thereafter some alarming news hit the wire: Sha’Carri had tested positive for THC, which is the primary chemical in marijuana. Although marijuana is not a performance enhancing drug, it is against the governing rules of track and field. Consequently, her performance on the track was immediately disqualified and she had to serve a 28-day suspension. For all intents and purposes, Sha’Carri’s Olympic dreams were over. This was a shocking turn of events. As you can imagine, the critics and the twitter-trolls were quick to judge.

However, there was much that Sha’Carri’s critics did not know. Sadly, just before that Olympic qualifier, Sha’Carri had been interviewed by a reporter. This complete stranger asked Sha’Carri how she was dealing with the recent passing of her mother. Sha’Carri was caught completely off-guard; She did not know that her mother was dead. The shock of this news triggered a strong emotional response because Sha’Carri still had many unresolved feelings toward her mother. Even worse, she now had to stuff those feelings deep down inside and prepare for the most important race of her life. It was right after she learned this shocking news that she made the decision to ingest some marijuana to ease the stress.

A few mornings after her disqualification Sha’Carri appeared on the Today Show to talk about it. Live, in front of a national audience, she began the conversation by holding herself accountable. “I want to take responsibility for my actions,” she stated. “I know what I did. I know what I’m supposed to do. I still made that decision.” It was refreshing to hear a young athlete take such an honest stance. It would have been easy to blame others or talk about the unfairness of the outcome.

Later, Sha’Carri was interviewed about being disqualified from the Tokyo Olympic Games. She made no excuses. She simply apologized to her supporters.

I’m not making any excuse or looking for any empathy in my case, but finding out information like that, that definitely was a heavy topic for me. To my fans, my family and my friends, I apologize. As much as I’m disappointed, I know that when I step on the track, I don’t just represent myself. I represent a community that has shown me great love and support. I apologize that I didn’t know how to deal with my emotions. I’m human. I’m you. I just happen to run a little faster.

Sha’Carri said all of this on live national television without a script or cue cards. She spoke straight from the heart. She held herself accountable, she apologized, and she explained her situation. As a result, most Americans empathized with her pain. Most of us will lose a parent, but most of us will not do so in the public eye on the eve of the biggest event of our life. Sha’Carri chose to deal with her pain in her own way and, even though it was legal to use marijuana in Oregon, there were swift consequences for her actions.

It is unknown how this young 21-year-old will bounce back. Will she go on to heal herself? Will she become an Olympian? Will she set world records? Sha’Carri’s confidence is back: “I’m very young. I’m just 21. I have plenty of games to compete in and plenty of talent to back me up. After my sanctions are up, I’ll be ready to compete.” Her character seems to equip her well for this mission — on and off of the track.

Sha’Carri Richardson is one of the 144 “Wednesday Role Models” featured in the Student Athlete Program. This program is designed to improve the character, leadership and sportsmanship of high school athletes. To learn more about this program and how you can implement it in your school: