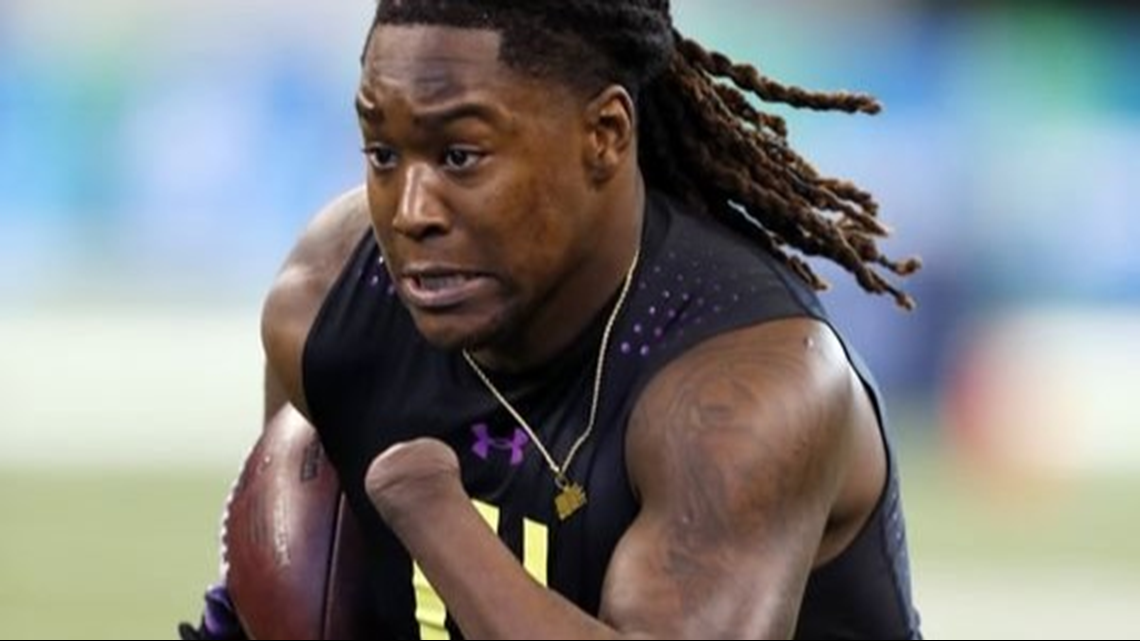 “I want to be able to use my platform to inspire others, no matter how old they are, how many limbs they have and where they come from.”

On July 20, 1995, Tangie Griffin gave birth to Shaquill. Roughly 60 seconds later, she gave birth to Shaquem. They are identical twins. This happens when the egg splits into two separate babies within the first twelve days after conception. Some scientists suggest that the later the egg splits, the more alike the twins will be. According to Shaquem, because the Griffin twins are so similar, “I’m guessing our egg probably didn’t split until around 11:59 on the twelfth day.” They look alike, act alike and, as children, did almost everything together. Up until their sophomore year in high school, they wore identical outfits each day. They looked so much alike that they sometimes swapped classes on test days because Shaquill was better at math and Shaquem was better at English. And, even now, they have similar thoughts and can easily complete each other’s sentences.

Nevertheless, there was one substantial difference between these twin boys. While in the womb, Shaquem suffered from a rare and unfortunate event called amniotic band syndrome. In Shaquem’s case, ruptured tissue from the amniotic sac broke free and wrapped around his left wrist. This resulted in a glove-like hand with soft muscle tissue and stubby digits. Moreover, his hand hurt tremendously whenever he put pressure on it. It hurt so bad that, when he was four, Shaquem picked up the biggest knife in the kitchen with the intent of cutting off his hand. His mother caught him just in time, calmly disarmed Shaquem, and sent him back to bed. As he lay in bed, he waived his digits in the air and begged his mom, “Cut them off, please!” Later that night, she called a surgeon at home and demanded an amputation the next morning. So, in the morning when Shaquem awoke from the surgery, his hand was gone — but so was the pain.

Early on, Shaquem’s parents decided that they would never allow him to use his missing limb as a hindrance or an excuse. The parents also decided that the twins were going to do everything together, which wasn’t a difficult task for these two. They always had each other’s back. They also competed at everything, including who could tie their shoes faster, who could throw a rock farther, and who could eat the most. “Unless you’re a twin, I think it’s difficult to truly understand how close we are,” stated Shaquem. “We have an unbreakable bond and we’re rarely apart. We’re inseparable.”

So, when the identical twins with the same DNA started playing sports together, a competitive-yet-supportive bond naturally occurred. They played baseball, basketball, football, and ran track together. In middle school, they initiated their own track club. When they began, they only had 12 athletes competing. By the time they graduated, they had over 150 kids and a waiting list to join. The team didn’t have a “jumping coach,” so the brothers learned the triple jump by watching YouTube videos. Several months later, Shaquem won a state title in this event and Shaquill won the same title the following year. At the 2013 Florida State championships, they teamed up to bring Lakewood High School their first team championship.

In middle school, Shaquem and Shaquill made a pact that they “would stick together no matter what.” So, when Shaquill began receiving more accolades in football, he would tell college coaches not to offer an athletic scholarship unless they planned on offering two scholarships. “I wasn’t going to a college that would not accept my brother, period,” stated Shaquill. “Nothing is more important to me than being with him.” So, he declined scholarship offers from Miami, Florida, Florida State, Vanderbilt, and other Power Five Conference schools. When the University of Central Florida heard rumors of this demand, the head coach wrote Shaquill a text that read, “You can’t come here without Shaquem.” This was exactly what the brothers wanted to hear and they both accepted scholarships to play football at UCF.

Unfortunately, this is where the fairy tale ends. Shaquill became a starter during his freshmen year and a star cornerback during his sophomore year. Meanwhile, Shaquem was red-shirted his freshmen year and played sparingly his sophomore year. Despite doing everything the coaches asked of him, Shaquem just wasn’t given a fair chance to contribute to the team and he was miserable during his first three years at UCF. The coaches just didn’t believe that a person with one hand could play major college football.

Coach O’Leary, the head coach at UCF, specifically told Shaquem to leave campus during the summer workouts. He believed that Shaquem was a negative influence on Shaquill. During this meeting, Shaquill blatantly told his head coach, “There is only one person in this room who has faith in my brother, and it obviously isn’t you. If you don’t want both of us at UCF, neither one of us is going to be here. I quit.” Later that afternoon, Coach O’Leary apologized to Shaquill and asked them both to reconsider, which they did. Unfortunately though, as the next season began, nothing had changed. Shaquem rode the bench for yet another year.

After an 0-12 season, Coach O’Leary retired and was replaced by Coach Frost. This new coach met with Shaquem and promised him a clean slate — a fair and equal opportunity to contribute to the team. This is all Shaquem wanted to hear. He was not looking for preferential treatment; just fair treatment. And, that is just what Shaquem received during his junior year. That year he started 13 games at outside linebacker and had 92 tackles. In one game, he had 14 tackles, including two sacks, a fumble recovery, and an interception. Shaquem was named the American Athletic Conference Defensive Player of the Year.

Before his senior year, Shaquem had to temporarily say goodbye to Shaquill who was drafted by the Seattle Seahawks. So, with a new-found desire, Shaquem received permission to move into the football practice facility on campus. He went to Target and bought a mattress, comforter, and plenty of snacks. Just like his dad had taught him, “In order to be the best, you have to work harder than the rest.” He lived, ate, and slept football that year. And, only two years removed from an 0-12 record, this 2017 team went 13-0, including a resounding victory over Auburn in the Peach Bowl. In his final game, Shaquem had 12 tackles and was named the Peach Bowl defensive MVP.

The top 300 college prospects are invited each year to the NFL Scouting Combine. In 2018, Shaquem made that distinguished list and he made the most of this opportunity. With the media buzzing about this one-handed athlete, Shaquem bench pressed 225 pounds 20 times and ran the fastest 60-yard dash time of any linebacker in the history of the draft. (This also was the exact time his twin brother ran the previous year.) On April 27, 2018, Shaquill became the first player of the modern era with a limb amputation to be selected in the NFL draft. He signed a four-year contract with the Seattle Seahawks worth 2.8 million dollars.

The bonus was being reunited with Shaquill in Seattle. Shaquem continued his hard work and became the leading tackler for the franchise during the preseason. In the first game of the regular season, Shaquem started at outside linebacker and standing right behind him was his big brother, Shaquill, at cornerback. On that day, this tandem became the first twin brothers to start an NFL game since Earl and Myrl Goodwin did it in 1928 for the Pottsville Maroons. The odds of a high school football player making it to the NFL is .09, so the odds of both making an NFL roster with the same team had to be one in a million. While nothing lasts forever in the NFL, it sure felt good to be fulfilling such a dream together.

Shaquem’s final chapter has not been written, but one thing for sure is that he has served as an inspiration for others. According to statistics, one in 1,200 children are stricken with amniotic band syndrome. Many of those children do not have supportive parents or a sibling to encourage them to live a productive life. When these children see someone like themselves succeeding at this level, they think, “Maybe I can do something substantial with my life too.” Shaquem carves out many opportunities to speak to children with this disorder. In fact, Shaquem believes God put him on this earth to inspire others to live out their dreams. “I want to be able to use my platform to inspire others, no matter how old they are, how many limbs they have and where they come from.”

Shaquem Griffin is one of the 144 “Wednesday Role Models” featured in the Student Athlete Program. This program is designed to improve the character, leadership and sportsmanship of high school athletes. To learn more about this program and how you can implement it in your school: