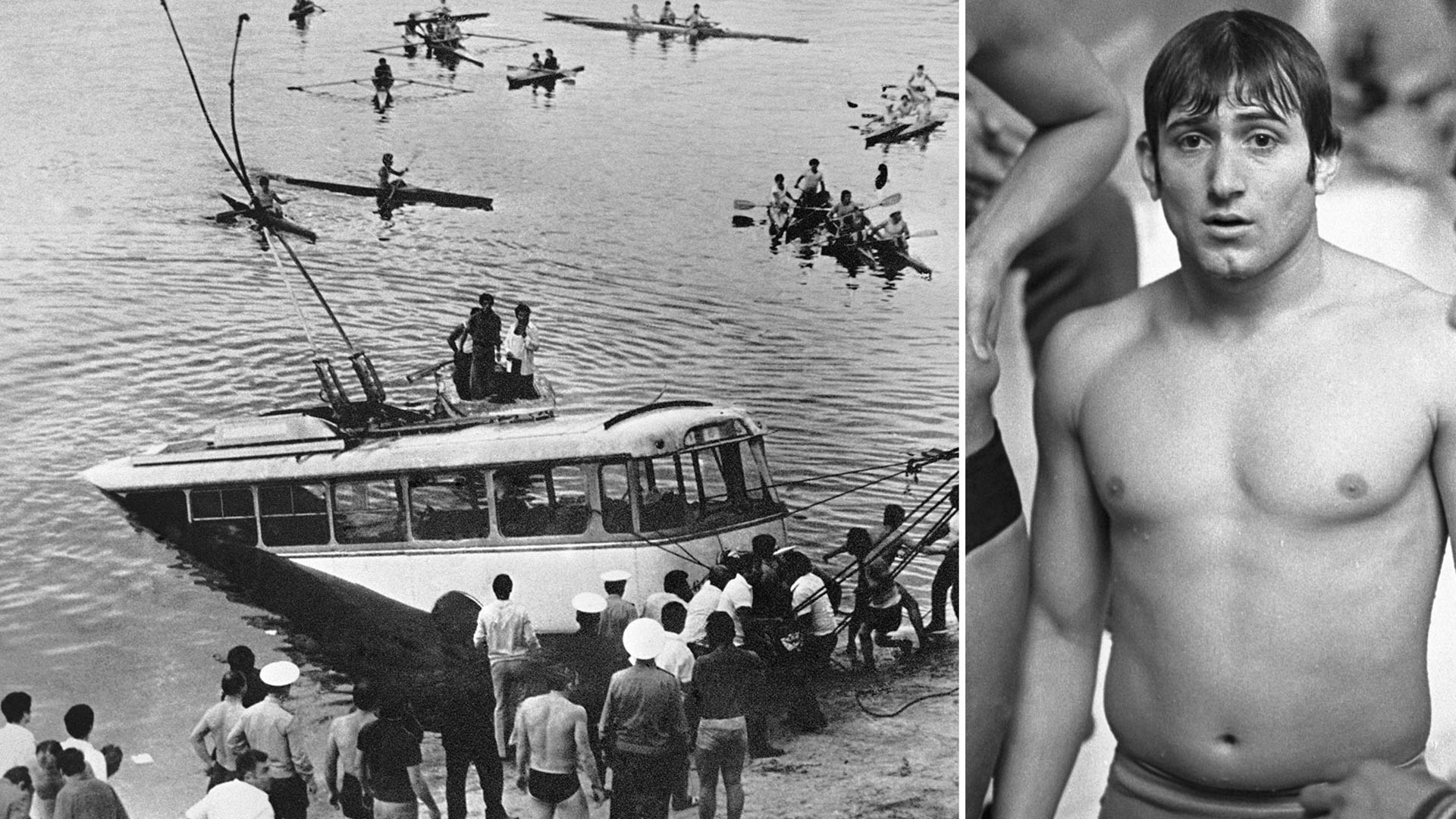 “In difficult moments like this, your love for fellow humans grows even stronger.”

In 1953 a boy named Shavarsh Karapetyan was born in Kirovakan within the Soviet Union. Shavarsh had only finished eight years of schooling before moving on to a technical school to become an auto-mechanic. During his childhood, he was encouraged to become a competitive swimmer, which he did. By the age of 23, he was a 17-time world champion, 13-time European champion, and 7-time USSR champion. He also broke 11 world records. Therefore, before the 1976 Olympics, Shavarsh was considered to be a shoo-in to represent the Soviet Union in swimming. However, internal politics kept him off the team: He was not from the right family and he did not have the right connections.

That unfair rejection led Soviet Coach Liparit Almasakyan to turn down an offer to train the USSR national team. He instead agreed to train Shavarsh for future competitions and created a special training program that combined intense swim workouts with long-distance runs. Subsequently, on the morning of September 16, 1976, Shavarsh placed 44 pounds of weights in his backpack and ran 12 miles. Accompanying him on the run that day was his coach and his brother, Kamo.

As they neared the end of their run, they suddenly witnessed a trolleybus swerve out of control and crash into Yerevan Lake some 80 feet away from the shore. Within seconds, the bus sank 33 feet into its cold and murky waters. Unbeknownst to anyone else, 92 passengers were trapped inside the submerged bus. Without hesitation, Shavarsh organized a life-saving operation. He would dive down to the bottom of the lake to bring the passengers up to the surface, while his coach and brother would swim them to the shore to be revived.

Shavarsh took five deep breaths, dove to the bottom, and located the bus. However, he had almost zero visibility because the bus had churned up so much silt from the bottom of the lake. And then Shavarsh encountered his biggest obstacle: There were no openings and so the passengers were unable to get themselves out. Shavarsh firmly grabbed the roof of the bus and kicked in its rear window. “The most difficult thing was to knock out the rear window of the trolleybus,” reflected Shavarsh. “Of course, I was hurt by the glass. The pain was unbearable, but then I did not think about it – I understood that there was little time.”

It is estimated that Shavarsh took 40 dives to the bottom and swam through broken glass in order to retrieve passengers on the bus. Each time he submerged, he spent about 25 seconds saving the next person. Nearly 20 minutes into the evacuation, rescuers arrived on the scene. They begged Shavarsh not to try again because the people he was bringing up could no longer be revived. But Shavarsh refused to stop. He made one more attempt. Completely exhausted, he swam through the dark bus and managed to rescue one more body. However, when he emerged, his brother realized that the “body” was actually a cushion. To this day, Shavarsh is troubled by this mistake: “I could have saved a life instead. That seat still haunts me in my nightmares.”

In total, Shavarsh directly saved 20 lives, and another 26 people were able to swim up from the bottom after the window was shattered. Nevertheless, 46 out of the 92 passengers died on that dreadful day. After the commotion subsided, Shavarsh was rushed to an intensive care unit with a 104-degree temperature. The athlete had lost a lot of blood and the combination of cold, polluted water, and multiple lacerations from glass shards, led to double pneumonia and blood poisoning. Shavarsh remained in the hospital for a total of 45 days. Moreover, because of this daring rescue, his career as a competitive swimmer was over. He would never swim in the Olympics.

Interestingly, the details of this story did not immediately get released. During that time, the news media in the Soviet Union were largely controlled by its communist government — which did not want negative stories released about public transportation. So, according to the news media the event never happened: A trolleybus did not crash on that fateful morning and citizens did not die. And therefore Shavarsh did not save all those people. However, the truth is, he did save those people. There were hundreds of eye-witnesses and at least 20 rescued victims who could bear witness to the event. Over the following weeks and months those witnesses talked and the truth could no longer be suppressed.

Finally, some six years later, an article appeared in the Komsomolskaya Pravda Daily. The headline read, “A Champion’s Underwater Battle,” and it detailed the tragic and heroic details of the crash. That article led to another, and then another. Before long Shavarsh was a folk hero, known much more for his heroism than for his swimming accomplishments. He received over 60,000 letters from his fellow citizens praising him for his selflessness. The Kremlin awarded him the Order of the Badge of Honor and the medal for Salvation of the Drowning. The Soviet government also tried to give Shavarsh and his brother Kamo a cash award. But their father quickly returned the money, telling officials, “My sons didn’t do this for the money.”

During the six years between the accident and the published article, Shavarsh had never spoken of the event. We know this because his wife first learned of the event when the publication came out. When his wife asked him why he had not disclosed this information, he responded, “We need to make babies, not tell stories.” To this day, Shavarsh doesn’t consider his actions heroic or extraordinary. When asked why he did what he did, he nonchalantly responded, “I was simply closer to the crash than anyone else.” He also admitted that he would have rather died than not jump into the water that day. He simply did what was right, regardless of how difficult or dangerous the situation.

Shavarsh tried to get back into competitive swimming. However, he struggled physically; He was no longer the same athlete that he used to be. “When I started heavy training, I couldn’t handle it. Mucus was coming up from my lungs. I was coughing all the time.” Shavarsh also struggled psychologically. He explained: “It wasn’t that I was scared of the water. I just hated it.” So, although he had experienced some brief swimming success after the rescue incident, Shavarsh called it quits. He moved to Moscow and founded a shoe company called “Second Breath.” He remains there with his wife and children.

As if Shavarsh hadn’t proven how brave and selfless he was, another incident cemented that legacy. Nine years later, on February 19, 1985, he happened to be walking by a concert arena that had suddenly caught fire with many people trapped inside. As you might expect, Shavarsh ran into the building and began pulling people to safety. Once again, he was hailed a hero and, once again, he suffered serious injuries. Shavarsh spent numerous weeks in the hospital with severe burns.

When the 2014 winter Olympics were held in Sochi, the Russian government honored Shavarsh by selecting him to carry the Olympic torch. Also, a documentary named “Swimmer” and a film entitled “20 Lives” were created to commemorate his story. Even so, my guess is that you have never heard the story of Shavarsh Karapetyan. Most Americans are not privy to the sports stories that happened behind the iron curtain during the Cold War. However, this man does exist and this story did happen. A promising Olympian selflessly sacrificed his athletic career to save the lives of his fellow human beings. I hope you will join me in recognizing him as a true role model and an inspiration to all.

Shavarsh Karapetyan is one of the 144 “Wednesday Role Models” featured in the Student Athlete Program. This program is designed to improve the character, leadership and sportsmanship of high school athletes. To learn more about this program and how you can implement it in your school: