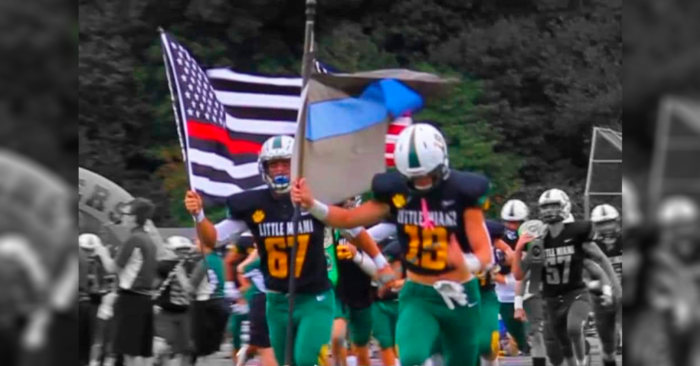 On September 11, 2020, Little Miami High School hosted a football game. When the athletes came running out of the tunnel, Jarad Bentley carried the “Thin Blue Line” flag to honor fallen police officers and Brady Williams carried the “Thin Red Line” flag to honor fallen fire fighters. The boys thought this would be a fitting tribute on the 19th anniversary of the attacks on our country that killed over 3,000 Americans.

A day before the game, the students asked if they could carry these flags onto the field. They claim they were given permission. However, prior to the game, the decision switched. The boys were told they could not. After conferring with the team, the two boys decided to do it anyway. After the game, the boys were suspended. “We can’t have students who decide to do something anyway after they’ve been told that they shouldn’t be doing it,” said superintendent Gregory Power.

Within a few days of community pressure, the suspension was reversed. Both boys were reinstated. Kellie Williams, mother of Brady Williams was proud of her son for exercising his first amendment rights, saying, “Sometimes standing for something that’s right, means you may stand alone. I’m proud of the son we have raised. A son that knows right from wrong. He knows the importance of honoring the men and women who gave the ultimate sacrifice at a time when he wasn’t even born.”

Kellie went on to argue that if some athletes can kneel while the National Anthem is played and carry “Black Lives Matter,” signs, she argues that other kids can exercise their first amendment rights as well.

Joe’s Perspective: To me, this is a simple case. If you allow high school athletes to kneel during the national anthem or support, “Black Lives Matter,” you must also allow other students to express their own personal beliefs. However, the larger question on the stance of allowing high school athletes to exercise 1st Amendment Rights as a whole, is difficult. Why? Once you put on that team uniform, you are representing your school. It’s no longer about you or your personal beliefs. Your beliefs might clash with those on your team or with parents in the stands. Your beliefs might create a political divide in the community.

Your Turn: So, what do you believe? Do you think high school athletes should be allowed to exercise 1st Amendment rights before competitions?