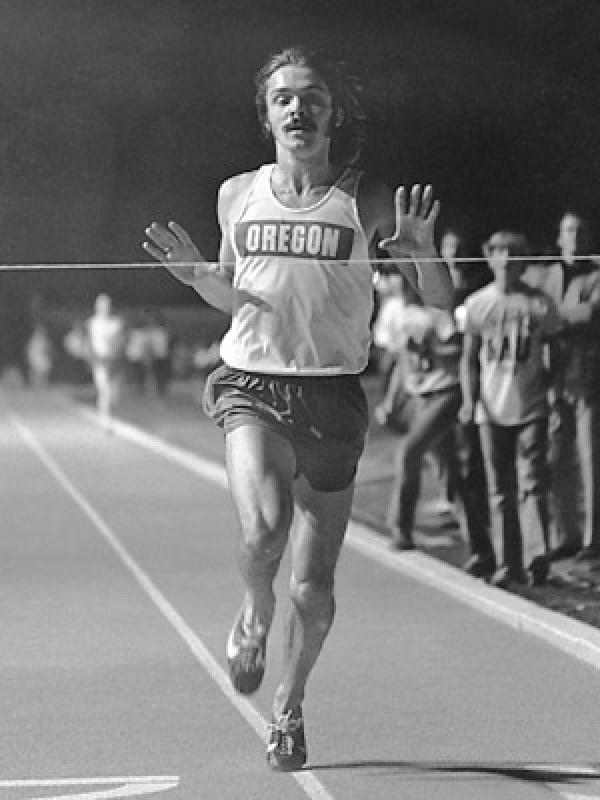 The chants “Go Pre,” “Go Pre,” “Go Pre” were coming from 12,000 fans at Hayward Field on the campus of the University of Oregon. The chants were for Steve Prefontaine, a long-distance runner on the University of Oregon track team. It didn’t matter if he was running the mile or the 10,000-meter race or anything in between, everyone was waiting to see Steve run, a man everyone simply called, “Pre.” It was like a rock concert recalled one young fan, Mary Paczesniak, “You’d yell and yell and tears would be streaming down your face and it was because you knew you were witnessing something so special, something that couldn’t be replicated by anyone else.”  This was the typical scene at a home track meet from 1970-1973 as Steve Prefontaine ran his way through college.

No distance runner, before or since, has received so much admiration. Pre gave it 100% every time he ran. It didn’t matter if it was a 6 a.m. training run or a dual meet against inferior competition. He was a front-runner and he pushed the pace – always. As he often said, “A lot of people run a race to see who is the fastest. I run to see who has the most guts.” He didn’t respect runners who ran on someone’s shoulder and “stole” a race at the end with a big kick. He knew that a mediocre performance could win a race, but he believed that “running mediocre” was to cheat the sport. People respected Pre’s attitude and the way that he ran.

Steve Prefontaine was born in the little logging town of Coos Bay, Oregon, in 1951. His father was a welder and his mother was a seamstress. Many people say Pre learned his toughness from this blue-collar town. He played football and basketball, but at 5 feet 9 inches tall and weighing less than 125 pounds, he spent a lot of time riding the bench. In 8th grade, he saw some high school cross country runners jog past the football field and he believed he might be more competitive in that sport. However, Pre was nothing special as a freshman and a sophomore. He wasn’t even the best runner on the team. As a sophomore, he couldn’t even qualify for the state meet.

There are a few pivotal moments in everyone’s life and this was Pre’s moment. He could have reasoned that he just didn’t have what it took to be that good, or he could double-down on running and give it everything he had in order to turn his dreams into reality. With a little encouragement from his coach, Pre decided that he was going to be the best. He was simply going to outwork everyone else. He set his alarm clock for 5:30 every morning and put in the long, hard miles. When he returned for his junior year, he told his coaches, “What I want to be is number 1.” From that moment on, he never lost another race in track or cross country while in high school. Pre not only won – he punished his competition. Pre broke a total of 19 national high school records, one of which was a sensational time of 8 minutes and 41 seconds in his favorite event, the two-mile.

College was next and Steve Prefontaine really wanted to attend only one university, the University of Oregon. Its track coach was legendary (and in the future would co-found Nike). However, this man, Bill Bowerman, did not recruit as a matter of principle. He didn’t visit, call, or write Pre a letter. But apparently he had his eye on Pre all the same. Finally, in the spring of Lafontaine’s senior year, Coach Bowerman wrote an open letter to Pre’s  hometown newspaper. In it he stated, “I have every confidence that if he keeps his eye on the target… he will become the greatest runner in the world.”

Picture this brash small-town 18-year-old kid entering the college town of Eugene, Oregon, home to one of the most-accomplished track and field programs in the country. He sported what would become his trademark mustache and wore his sandy-brown hair longer than most. Sportscaster Wendy Ray said, “He just had that, whatever ‘it’ is. Actors have it. Singers have it. Some people have it. Most people don’t. He had a lot of it.”

In 1972, Pre turned his attention to the 1972 Olympic games in Munich, Germany. He qualified for the 5,000 meters by setting a new American record. He entered the Olympic Games as a heavy underdog to the European runners, who were much older and more experienced. Pre’s strategy before the race was simple, “I’m going to work so hard that it’s a pure guts race at the end, and if it is, I’m the only one who can win it.”  He continued, “Somebody may beat me, but they are going to have to bleed to do it.”

The first two miles did not go as planned in the 5000 meter Olympic final. Pre was boxed in by several runners and he bided his time in what was a slow-paced race. With one mile to go, Pre found his opening and surged to the lead.  The announcers yelled, “And Steve Prefontaine is going to take the lead with four laps to go.” However, the race favorite, Lasse Viren of Finland, took the lead back with 800 to go. Pre battled back with 600 left. “Pre is running a gutsy race. What a show he’s putting on!” Viren and Mohamed Gamoudi of Tunisia then battled back to take the lead at the beginning of the bell lap. With 200 to go, Pre sprinted to take the lead, “Pre is showing all the guts in the world.” However, Pre went too early and had nothing left. Viren and Gamoudi, and then Ian Stewart of Great Britain passed him in the final straight away. Pre finished in a disappointing 4th place.

Pre was devastated. Most Americans were too. However, Bowerman, still his coach, said he was never more proud of any race that Pre previously had run. Phil Knight, the other co-founder of Nike, reflected, “When you look back at that race, he could have easily been the bronze medalist, if he hadn’t made the burst down the back stretch. When he went by those guys, I said, ‘well, he didn’t lack for courage.’ He would have rather gone for the gold and died trying than go for the sure bronze. And that just typified the man.” Still, Pre was only 21 years old. He surely could expect to have at least two more chances to win Olympic Gold and become a world champion.

Unfortunately, Pre would never get another chance to compete in the Olympics and take down Viren in Montreal. After winning another big race at his beloved Hayward Field, Steve Prefontaine attended a party to say goodbye to a visiting Finland team. On his way home from the party, for reasons that no one knew, he ran off the road, his car flipped, and he was pinned underneath. On May 30, 1975, arguably the greatest distance runner that America ever produced died. He was just 24-years old.

Pre was buried in his Olympic uniform in a cemetery in Coos Bay. To honor his memory, a eulogy was delivered in exactly 12 minutes and 36 seconds, the exact time Pre said he was going to run to break the world record in the 3-mile run. Bill Bowerman ended the eulogy with these words, “Pre finally got it through my head that the real purpose of running isn’t to win a race, rather it’s to test the limits of the human heart, and that is what he did. No one did it more often. Nobody did it better.”

One of his biographers, Bree Donovan wrote, “I’m certain there will never be another who will be able to duplicate that special mix of fire, guts and determination.” More than forty years after his death, Pre is still remembered and adored. His spirit will never die. Runners still try to emulate him. People still buy “Go-Pre” t-shirts and posters with his likeness paired with one of his numerous quotes like, “Don’t let fatigue make you a coward.” Runners of all ages still visit “Pre’s Rock,” and leave behind something to pay their respects. One of the biggest races of the track season is the annual Prefontaine Classic. Hollywood has even made two movies about the life of Steve Prefontaine.

Perhaps Phil Knight was best able to put Pre’s life in its proper perspective when he said, “Of all the great athletes who have worn our products on the field of battle – we made a statue of only one of them – that of Steve Prefontaine.”

Steve Prefontaine is one of the 144 “Wednesday Role Models” featured in the Student Athlete Program. This program is designed to improve the character, leadership and sportsmanship of high school athletes. To learn more about this program and how you can implement it in your school: