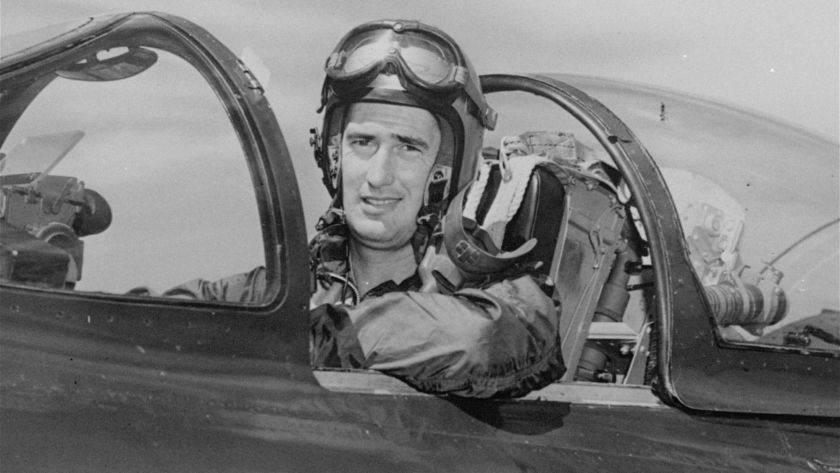 “I worked hard at flying. I wasn’t prepared to go into it. Then I had to work as hard as hell to try to keep going, to try and keep up. I think that’s as great an accomplishment as I did in my life. The other thing, of course, is that I had a good baseball career.”

We have no control over when we were born or what was going on in the world at that time. However, Ted Williams was born at the perfect time, because the magnitude of his contributions demanded a world stage in more ways than one. Born Theodore Samuel Williams in 1918, he was named after his father and President Theodore Roosevelt. Like Roosevelt, Ted Williams was known to be brutally honest, stubborn, arrogant, and ultimately confident in his abilities. He would come to live up to his namesake in both accomplishments and patriotism.

Ted became a professional baseball player in 1939 and played for the Boston Red Sox over his 19-year career. “A man has to have goals — for a day, for a lifetime — and that was mine, to have people say, ‘There goes Ted Williams, the greatest hitter who ever lived.’” Two major things happened in 1941 that would impact that goal. Ted ended the season with a .406 batting average, which would send him well on his way to becoming the greatest hitter of all time. The other was Word War II.

On December 7, 1941, the Japanese bombed Pearl Harbor and the United States entered World War II shortly thereafter. Initially Ted was granted a draft deferment because he was the sole means of his mother’s financial support. The press and fans reacted negatively and questioned his patriotism. They would never have reason to do that again. Ted subsequently enlisted in the Navy after the 1942 baseball season and served for three years. Furthermore, Ted did not opt for an easy assignment playing baseball for the Navy. Instead, he went to flight school to become a combat fighter pilot. He graduated at the top of his class and during those two years of intense training, he set records that still stand today. He was in Hawaii awaiting orders to join the war efforts in the Pacific when the war abruptly ended.

Ted knew that he had been lucky to avoid combat and he thought his military days were behind him. Given how well he was hitting the ball before he enlisted, the press and fans couldn’t help but wonder what baseball records he might have broken during wartime. Perhaps Ted wondered too since he still had the goal of being the greatest hitter of all time. Still, he loved his country and knew he did the right thing:

“The three years that I lost — hell, there were nine billion guys who contributed a lot more than I did.”

Ted returned to baseball and resumed racking up home runs and RBIs. Little did he know that seven years later there would be another war that needed him. “When the fellows were getting out after the first war, they had us sign up for the inactive reserve,” said Williams. “That way you hold your status as a commissioned officer. I had worked hard to get mine. If we ever went to war again, I wouldn’t have wanted to go through that again. So I signed up, never thinking we’d be in war again.”

In the prime of his baseball career, the Korean War had broken out and Ted once again switched uniforms and went back to work for Team USA.  It was the spring of 1952 and, right after spring training and the first six games of the season, Ted was called back to active duty by the Navy. Unfortunately, he hadn’t flown a jet in seven years and he needed a refresher course. Some may have had their doubts about Ted’s return to the flight line. But John Glenn, who would go on to be one of NASA’s first astronauts, was not one of them. “He didn’t shirk his duty at all. He got in there and dug ‘em out like everybody else. He never mentioned baseball unless someone else brought it up. He was there to do a job. We all were. He was just one of the guys.” Glenn was happy to have Ted as his wingman on multiple missions.

Ted served for 17 months during the Korean War, flew 39 missions, and was hit three times in combat. He crashed-landed once and emerged with only a sprained ankle. “Everyone around here is calling me lucky,” he wrote home in a letter. Indeed he was. Shortly thereafter, Ted was sent home because of an ear, nose and throat ailment that caused a permanent hearing problem.

“Everybody tries to make a hero out of me over the Korean thing,” Williams later said. “I was no hero. There were maybe 75 pilots in our two squadrons and 99 percent of them did a better job than I did. But I liked flying. It was the second-best thing that ever happened to me. If I hadn’t had baseball to come back to, I might have gone on as a Marine pilot.”

It was back to baseball. The first thing Ted wanted to do after returning to the States was attend the All-Star Game. He was given a spot on the American League bench and made an honorary member of the team. That night Ted could have worn his Navy uniform. It was adorned with medals and ribbons. Instead, he downplayed his hero status and arrived in civilian clothes. Nevertheless he was treated as a hero. Ted received a standing ovation that lasted several minutes before the first pitch was thrown out. “I couldn’t help thinking how much I admired him for coming that way. None of that hero stuff for him,” recalled White Sox General Manager Frank Lane.

Ted Williams played seven more seasons and retired in 1960. At the time of his retirement, he was an All-Star 19 times, 3rd in career home runs, 7th in RBIs, and 7th in batting average. To this day, he is the last MLB player to hit over .400 in one season. Many baseball experts and fans agree that Ted Williams did indeed reach his goal of becoming the greatest hitter of all time. His statistics put him among the top three hitters. The other two are Babe Ruth and Barry Bonds.

Those who participated in World War II have been named the “greatest generation.” He served his country when it needed him, even when the call came twice during the prime years of his athletic career. “Much as I appreciate baseball, Ted to me will always be a Marine fighter pilot,” astronaut John Glenn said. Ted’s baseball records assured him entry into the National Baseball Hall of Fame in 1966. But he also was a decorated soldier and accomplished civilian. As such, in 1991 he was presented with the Presidential Medal of Freedom, the highest civilian award bestowed by the United States government.

Ted died in 2002 at age 83. The President of the Baseball Hall of Fame captured all aspects of the iconic man in his statement:

“Ted’s passing signals a sad day, not only for baseball fans, but for every American. He was a cultural icon, a larger-than-life personality. He was great enough to become a Hall of Fame player. He was caring enough to be the first Hall of Famer to call for the inclusion of Negro League stars in Cooperstown. He was brave enough to serve our country as a Marine in not one, but two global conflicts. Ted Williams is a hero for all generations.”

Baseball purists are still left wondering what Ted could have done with those five lost seasons of baseball in the prime of his life. Many agonize over what those numbers could have looked like. Many believe he would have been the greatest power hitter of all time by far had he not missed those seasons. As President George W. Bush remembered Ted’s “persistence on the field and courage off the field,” he said: “Ted gave baseball some of its best seasons and he gave his own best seasons to this country.”

Ted himself had no such regrets. He was proud of his service: “It’s a funny thing, but as years go by, I think I appreciate more and more what a great thing it was to be a United States Marine… People will tell me what a shame it was that I had to go back into the service a second time, but I’m kinda glad I did. Besides, I am a U.S. Marine and I’ll be one till I die.”

Ted Williams is one of the 144 “Wednesday Role Models” featured in the Student Athlete Program. This program is designed to improve the character, leadership and sportsmanship of high school athletes. To learn more about this program and how you can implement it in your school: