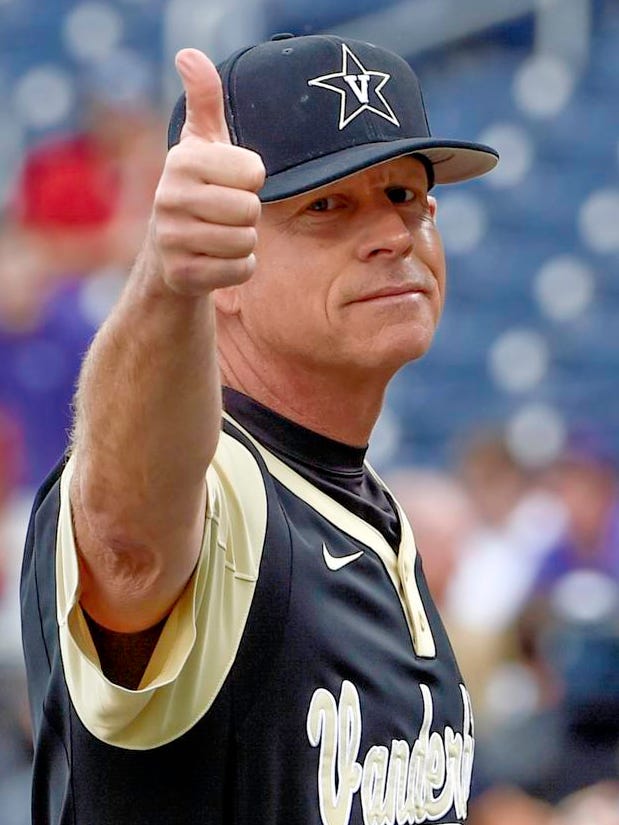 “We create a stable environment where there are standards and values, and a lot of room for individual growth.”

At the age of 42, Tim Corbin became the head baseball coach of Vanderbilt University. Before he arrived, Vanderbilt baseball had been the proverbial doormat of the Southeastern Conference. It had achieved only six winning seasons since baseball became a scholarship sport in 1968. However, once at the helm, Coach Corbin developed a solid program from the ground up. It wasn’t easy. Vanderbilt finished 6th, 7th, 8th and 6th in the conference during his first four years. But in 2007 it all came together. His team won the conference title and was ranked first in the country entering the NCAA tournament.

However, just like every other year, the final game of the season ended in a loss. For Coach Corbin it was devastating and he sulked for weeks. However, his wife, Maggie, had watched her husband transform into this despondent state many times before. This time she said something profound to him over dinner one night: “If you’re going to live and die with your success based on the last game of the year, you are going to die a miserable person. You are going to have to find other ways to value what you’re doing as a coach.” Corbin knew she was right. He now attributes this specific interaction with his wife as the life-altering moment for his program and his life. After all, there are roughly 300 Division 1 college baseball teams and only one will win the College World Series each year.

The first major change that Coach Corbin made was to redefine success in his program. He removed the scoreboard as much as possible from the equation. Instead, he placed the focus on establishing high standards, core values, and traditions. It’s not that he didn’t want to win, but he would now measure success by the growth of the players. From that point onward Coach Corbin saw his job primarily as challenging the players under his tutelage to grow mentally, athletically, and spiritually.

Many coaches talk about environment. This is defined by how everything is coming together on the team right now. In contrast, Corbin’s primary coaching concern has centered on developing team culture, which requires years of intentional focus. He estimates that it takes five to seven years to build a strong program culture.

“People on the team change, they float in and out every year,” says Corbin, “but the standards and the values of the organization never change.”

One of the traditions that Coach Corbin has built over the years is the “Vanderbilt Classroom.” The NCAA only allows coaches so much time each week to meet with players about baseball related matters — this includes the x’s and o’s, hitting, fielding, team strategy, and so on. However, the NCAA rule book says nothing about non-baseball related matters. So, for 30-45 minutes each morning, Coach Corbin has held a session in the Vanderbilt Classroom and proceeds to talk about anything and everything unrelated to baseball. Instead, he focuses on developing the character and leadership of his student-athletes. Topics include,

“The ripple effect of a poor decision,” “living your life with gratitude,” and “breaking free of entitlement’ and “understanding the impact of a positive life force.” Although this classroom time is not a team requirement, all or almost all of his players show up every single day.

The recruiting visit also looks very different for Vanderbilt University Baseball than that of just about any other college in the country. Typically, at most schools, the high-profile recruit visits on the weekend and is given the red-carpet treatment. He typically attends a game that favors the recruiting team. Afterward, the current players take the recruits out to dinner and then to parties on campus. Coach Corbin views that type of visit as an unrealistic version of the life of a student-athlete. Instead, he brings recruits in for a mid-week visit. He wants them to understand the realities of student life — student demands in the classroom, program expectations, and the balancing act each student-athlete must maintain over four years. “Fit is the most important piece of recruiting,” says Coach Corbin. “Otherwise it’s not going to be a good experience. We want kids who want to grow, like a classroom, enjoy discipline, and want to be held to a high set of standards.” Coach Corbin often tells the story of turning down the top-rated player in the country because he was not a good fit for the baseball program or the academic rigors at Vanderbilt.

Once a student-athlete selects Vanderbilt and steps on campus, they typically are surprised to learn that Coach Corbin doesn’t have a bunch of rules and regulations to follow. He doesn’t do curfews or make sure that they attend class. Corbin only has one rule which he says basically covers everything: “Don’t embarrass your parents.” Corbin believes that rules are for people who can’t follow directions, but standards are for people who aspire to do special things. So, he establishes standards of making good decisions, eliminating drama, and excelling in the classroom.

Before Corbin took the job at Vanderbilt, he earned his stripes at Wofford College, Presbyterian College, and as an assistant at Clemson University. He met his future wife at Presbyterian College and later dated her for three years before marrying her. They carefully eased into the relationship because Maggie had two daughters from a previous marriage. He wanted to make sure that he could love her children as much as he loved Maggie. He carries that step-family metaphor over to his teams at Vanderbilt. Coach Corbin literally attempts to create a family-type atmosphere with his teams where he “loves other people’s kids.”

As a leader, Coach Corbin asks his players to trust the process, be patient, learn, and get better. He encourages his players to take full advantage of — and enjoy — every day. In his classroom lectures, he tells his players: ”Get better at your craft, get better at relationships, be vulnerable, build knowledge, test your limitations and take on challenges.”

The important lesson to learn here is that as Coach Corbin focused less on winning and more on the personal growth of his players, his teams began to win more. Since he changed his leadership principles in 2007, his team has not missed the NCAA tournament, and they have won five SEC Championships and two national championships. In contrast, many coaches believe you either focus on character or on winning. For Coach Corbin, it’s not an either/or choice: It’s a both/and equation. He, and coaches like him, have clearly demonstrated that focusing on character ultimately increases the probability of winning.

Coach Corbin has had numerous former players play professional baseball at any one time. This is common for many big-time institutions. What separates Vanderbilt from other universities is the number of former athletes who have come back each winter to train on campus. For example, in 2017, 36 former players returned to Vanderbilt to train with Coach Corbin. Each morning they joined the current players in the Vanderbilt Classroom and each afternoon they practiced right alongside the current players. Dansby Swanson, the number 1 selection in the 2015 draft, was one of those players. When asked why he was returning to Vanderbilt each year, he said: “This place defined who I am and where I was going to go. It shaped who I am.” Coach Corbin warmly classifies his former players who return every year as a “luxury item,” and the “paycheck that is not paid in the form of money.”

In 2017 the university completed a 30,000 square foot, 12 million dollar renovation of the baseball complex. Over 60% of Corbin’s former baseball players contributed to this renovation. This contrasts hugely with the experiences of other NCAA universities where only two to three percent of their former athletes annually contribute to their schools, even though many of them have become highly successful. David Price is one of Vanderbilt’s talented major league superstars and he donated over a million dollars to this cause. When asked why he contributed these funds, he simply said:

“Coach Corbin is a second father to me. I’m in debt to this program and Coach Corbin. I want to give back in any way that I can.”

Tim Corbin is now in his 60’s. He is one of the most respected leaders in the world of coaching at one of the top programs in all of college sports. When young coaches visit Vanderbilt to learn how to create a powerhouse program of their own, they do not come away with a lot of fancy baseball strategies or batting tips. Instead, they learn how Coach Corbin emphasizes personal development, continual learning, core values, high standards, caring relationships, culture and character. In essence, these coaches receive a tutorial on how to become both an effective and beloved leader.

Tim Corbin is one of the 144 “Wednesday Role Models” featured in the Student Athlete Program. This program is designed to improve the character, leadership and sportsmanship of high school athletes. To learn more about this program and how you can implement it in your school: