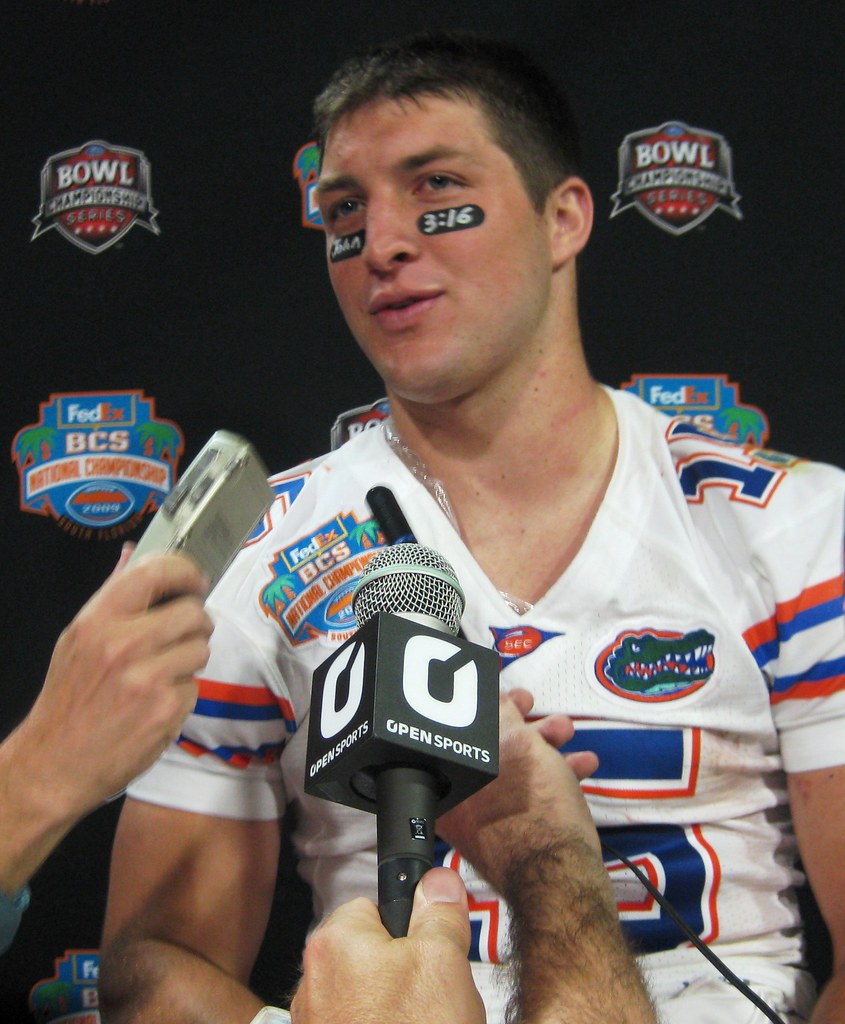 “My main purpose is not about football or baseball, or anything like that. It’s about helping others. It’s about finding the people who need hope.”

Others remember him as the 2007 Heisman Trophy Recipient and as a 2023 inductee into the College Football Hall of Fame. Most recall his short but memorable career as a quarterback in the NFL. Some might remember his professional baseball career with the New York Mets organization. Tim is also a New York Times best-selling author, broadcaster, movie producer, and philanthropist.

Regardless of his job, Tim wants you to know him as a man of tremendous faith and to regard him as a positive role model. The most important thing in his life is to help others in need. The Tim Tebow Foundation was founded in 2010 and has one mission:

“To bring Faith, Hope and Love to those needing a brighter day in their darkest hour of need.”  His organization is dedicated to helping orphans, special needs children, and terminally ill children. This is his true mission and his ultimate life purpose.

To fully understand why Tim is such a committed and passionate person, you must start from the beginning. Tim’s parents, Pamela and Robert Tebow II, met while attending the University of Florida and married on June 12, 1971.  A few years later, the family moved about 9,000 miles away to the Philippines where they served as Baptist missionaries.  During this time, Tim’s mother became very sick and contracted amoebic dysentery. While recovering, she discovered that she was pregnant. Because of the medicines she had to take, her doctors didn’t expect a positive outcome for her baby. In fact, the best professionals in the Philippines suggested Pam terminate the pregnancy.  Nevertheless, the Tebows had faith that everyone would pull through. Sure enough, on August 14, 1987, Pamela gave birth to a thriving little boy, namely, Timothy Richard Tebow.

Tim is the youngest of five children. When he turned three, his family packed their bags and made the long journey back to the United States. They settled in Jacksonville, Florida, and the parents proceeded to homeschool their children. The foundation of their teaching would be their faith and the Bible.

Fast forward to 1996 when Tim was 9 years old. The State of Florida passed a new law allowing homeschooled students to compete in high school sporting events. This law allowed Tim to compete for his local high school team. Growing up, Tim had a real passion for sports and played whenever he could. His athletic journey began at Trinity Christian Academy.  In 2003, he transferred to a nearby school in St. Johns County where he was able to play quarterback for Allen D. Nease High School. Tim led his team to a state title during his senior year. He was named Mr. Football in Florida and selected to several all-American teams.

Tim had been highly recruited by colleges and ultimately accepted a football scholarship to the University of Florida. He played for the Florida Gators from 2006-2009.  Besides setting numerous personal, school, and national football records, Tim became known for his outspoken Christian views. Some say he is the most outspoken Christian athlete of his generation. For example, Tim frequently wore references to biblical verses on his eye black (such as John 3:16) and prayed on the sidelines (a term now known as “Tebowing”). Tim recalled a special moment for him during one of the biggest games of his life, “We were playing for the national championship in college on January 8, 2009, and I decided to wear ‘John 3:16’ under my eyes. During the game, 93 million people decided to Google John 3:16 and it was a pretty cool moment.”

Tim was a fierce competitor and a phenomenal leader. During his college career, Tim led the Gators to two BCS National Championships and was named MVP of the 2008 BCS National Championship game. In 2007, Tim became the first homeschooled student to receive the Heisman Trophy, an award given annually to the most outstanding college football player on and off the field. In 2010, Tim entered the NFL draft.  He was quickly selected by the Denver Broncos in the first round. Surprisingly, there were still some skeptics. Many coaches and players didn’t think he had what it took to be a successful NFL quarterback. They didn’t think he could throw a ball consistently and, quite frankly, they didn’t care for his candid views. But coach John Fox of the Broncos believed in him.

Coach Fox often let Tim give pregame pep talks.  For example, Tim once gave a compelling speech before a big game against the San Diego Chargers. If they were to win this game, they would make it to the playoffs. As it turns out, Tim led his team to an overtime victory. “I’ve never seen a human who can will himself to win like that,” Broncos linebacker Von Miller stated. “He gave us a great speech. We came out fired up. And that was a wrap.”

In the world of sports, nothing is certain and, on March 21, 2012, Tim was traded to the New York Jets. During his short time with the Jets, he broke two ribs and didn’t play well. This became a big setback for his NFL career. Tim was cut or released from three more teams in the next three years.  At this time, he had to reevaluate his career and life in general. “When you’re going through that, what do you have to hold onto?” Tim wondered. “What is your foundation? Who are you? And more importantly, who are you in your relationship with Christ?”

Tim had a lot of thinking and soul searching to do.  The realization that his career in the NFL was pretty much over didn’t sit well with him. Nevertheless, in 2016 Tim announced that he wanted to play professional baseball. This was despite the fact that he hadn’t played the game since high school. Needless to say, this news came out of left field and shocked a lot of people.

To his credit, Tim continued to progress in his baseball career. He hit a home run on his very first pitch as a professional baseball player. Then, when he was promoted to A ball in 2017, he again hit a home run in his first at-bat. And he did it one more time when he was promoted to AA ball in 2018. In 2019, Tim was sent up to the major league New York Mets during spring training, but he didn’t make the final roster. In 2021, he announced his formal retirement from baseball. Tim then married ‘Miss Universe 2017’ and transitioned to a broadcasting career with ESPN.

Tim is able to keep everything in perspective. In response to negative comments, Tim simply replied:  “They’ll criticize. They’ll say, ‘Why? The chances of making it are so slim.’  But for me it’s about pursuing your passion and not being afraid of failure, not being afraid of what people are going to say because I’m also a believer that perfect love casts out all fear.”

Regardless of his chosen profession, Tim reminds us that it’s not all about sports. Tim lives his faith, is lifted by his faith, and has a mission to spread his faith. He does the latter through many platforms. These include his philanthropic foundations, books, and films.  “It’s not sports,” he says. “My main purpose is not about football or baseball, or anything like that. It’s about helping others. It’s about finding the people who need hope. That’s my calling. I believe I’m doing what God wants me to do — to serve those who may not have a lot of people who are serving them.”

Mark Twain once said, “The two most important days in your life are the day you are born and the day you find out why.” This is not necessarily a religious quote. Mark Twain’s purpose was writing books and helping people discover a love for reading. Tim Tebow has found his own purpose in life – to help those who need it. Hopefully this chapter inspires you to contemplate your own true purpose.

Tim Tebow is one of the 144 “Wednesday Role Models” featured in the Student Athlete Program. This program is designed to improve the character, leadership and sportsmanship of high school athletes. To learn more about this program and how you can implement it in your school: