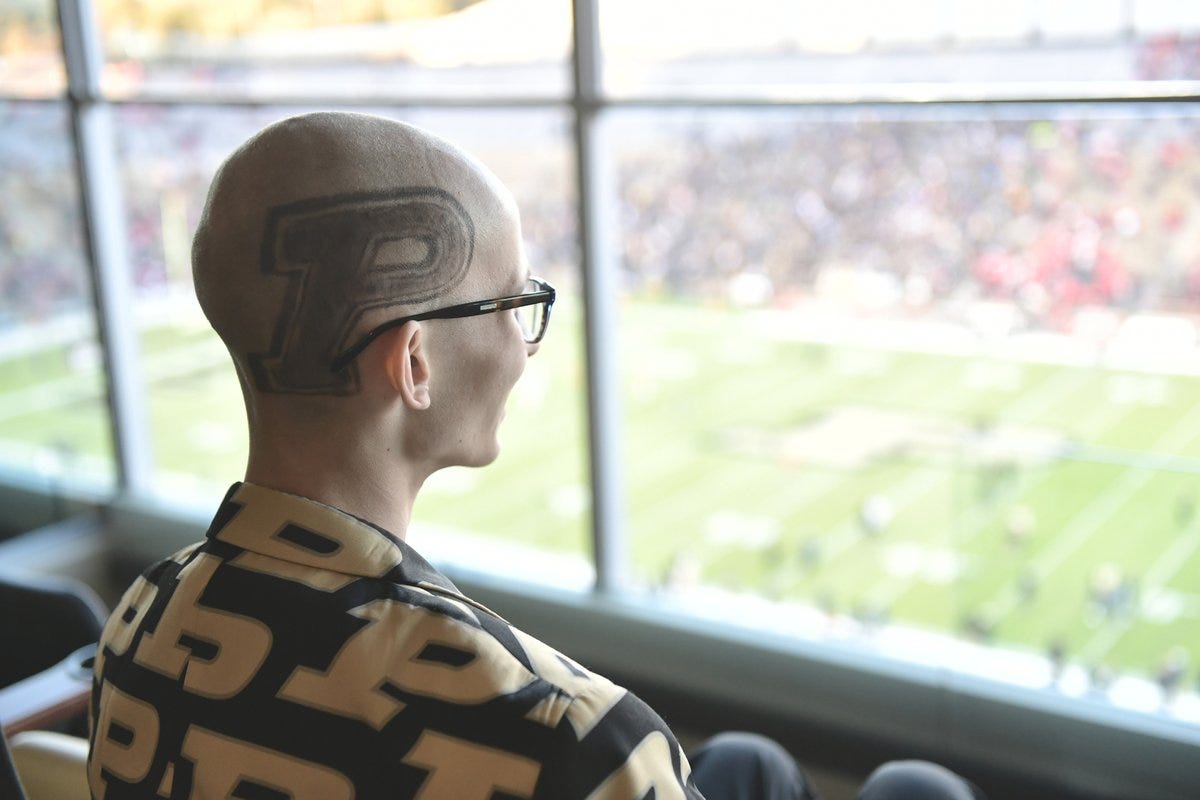 “Everyone has a story. And, there just needs to be people in this world willing to listen to that story. Every story matters.”

Tyler Trent never played a down for the Purdue Boilermakers. In fact, he never played a game of organized football in his entire life. This should come as no surprise, since he stood a mighty five feet, six inches tall and, on a good day, he weighed 120 pounds. In 2017, Tyler enrolled as a freshman at his beloved university — Purdue — and remained a student until health reasons forced him to withdraw the following year. Yet, his impact on Purdue University and its football team is as profound as any athlete who put on the pads during his tenure. During the 2017 season, Trent was named an honorary captain and his mere presence inspired the Purdue team to an unlikely upset over #2 ranked Ohio State University. Nearly a year later, on what would have been his 21st birthday, Purdue University named the student entrance to Ross–Ade Stadium, the Tyler Trent Student Gate.

So, who was Trent and why did he inspire so many people? Trent was born on September 7, 1998, in Carmel, Indiana, to Tony and Kelly Trent. As the first of three boys, Trent was the light of their life. He always had a smile on his face. He was smart, independent and he was a relentless sports fan. However, at the age of 15, his life changed during a game of frisbee with friends. “When I went and threw that frisbee, I actually broke my arm because my bone was so weak from the tumor eating it away,” he recalled. After the doctors ran numerous tests, Tyler was diagnosed with osteosarcoma, a rare form of bone cancer.

This was a daunting diagnosis for a likable teenage boy and his family. However, they all faced this diagnosis head on, with fortitude and determination. And that year all the bones in his upper right arm were replaced with Titanium and he endured nine months of grueling chemotherapy. He lost weight, energy, and most of his hair. But, overall, things seemed to be turning out well; His body was cancer free and Tyler and his family carried on with their lives. Shortly thereafter, Tyler graduated from high school and earned a Presidential Scholarship to attend Purdue University. It was — or should have been — a dream come true.

It lasted only a moment. Doctors had continued to closely monitor Tyler and just before that high school graduation ceremony, medical tests revealed that Tyler’s cancer had returned. And this time it had spread to his pelvis. To receive this news just days before his high school graduation — with so much to look forward to — was devastating. “I saw a face of my child — crushed, disappointed, heartbroken,” recalled a somber father. Tyler was now facing another surgery in August. This time the doctors removed the tumor, replaced his hip and reconstructed his pelvis. Undeterred, Tyler made a declaration to the medical staff: “I don’t care how hard it is, I’m going to school on time.” And he did. A mere 11 days after his surgery, Tyler began attending classes at Purdue University.

With the aid of crutches, Tyler bounded around campus from class to class. He seemed to have more joy than the average student, probably because he now fully understood the importance of living every day to the fullest. Josh Seals, lifelong friend of Tyler, put it this way, “What he taught me is that this life is a gift, but you have to be willing to receive that gift.” Tyler made a decision that he wasn’t going to wait until he was better to enjoy life or experience new things.

For example, at Purdue, students must wait in line to get tickets for each home game. Those at the front of the line get the best seats. Tyler, ever-passionate in his approach to life, decided to camp out overnight to ensure front row tickets for an upcoming game. When he phoned home to tell his dad the plan, his father asked, “Tyler do you really need to do that?” The response from his son was a resounding, “Yes Dad, I need to do that.” The next day Tyler texted a picture of himself camping out in his Purdue black and gold overalls, displaying two enthusiastic “thumbs-up.” This was also the first time that he met Purdue head football coach, Jeff Brohm. “You could see a guy, dressed in Purdue garb, head to toe, with a big smile on his face,” recalled Coach Brohm. “He didn’t tell me his story. He didn’t tell me what he was going through. He just had a positive attitude and brought a lot of life to the conversation.”

As fate would have it, this was not the last time that the two would meet. Coach Brohm and Tyler both supported cancer research and they occasionally bumped into each other at charity benefits. And Coach Brohm had taken a liking to Tyler. He believed Tyler’s passion for Purdue football and his positive approach to life were contagious, and he wanted his players to be infected! So, Coach Brohm invited Tyler to practice and had him speak to the team before a game. Subsequently, Tyler was designated as an honorary co-captain for the season. As part of his duties, he accompanied the other captains to midfield before games for the traditional coin flip. Then he watched the remainder of the games that season from the sidelines. For a Purdue super fan, it was the thrill of a lifetime.

Nevertheless, despite Tyler’s joy and passion, his cancer continued to show no mercy. By the end of his freshman year, the cancer had spread throughout his entire spine. Then, that summer, doctors broke the news to the Trent family that Tyler’s condition was terminal. There were no more treatments or operations that would save his life. So, in addition to enrolling at Purdue for his sophomore year, Tyler also enrolled in Hospice Care. “We don’t know the number of days,” said his despondent mother. “It’s more a matter of his body telling us.”

Tyler remained in close contact with Coach Brohm and several of the Purdue players. He made it to home games whenever he could and retained his duties as honorary captain. Even being confined to a wheelchair on the sidelines could not keep the smile off his face. After the Boilermakers beat the Nebraska Cornhuskers, several members of the team made the 70-mile drive to the Trent home to deliver Tyler the game ball. They hugged and they laughed. They also prayed together. Afterward when team quarterback, David Blough, was asked by reporters how Tyler looked, he responded, “To me, he looks like a Boilermaker. He looks like someone who’s going to fight until there is no fight.” For his part, Tyler spoke passionately about his friends with tears running down his cheeks: “I think that when people go out of their way to come to your house and pray for you, and deliver me the game ball, that’s a huge encouragement.”

By this point, the national media had picked up on Tyler’s story. It seemed everyone was rooting for him. They would not be disappointed. When a reporter asked Tyler about his “future,” Tyler ignored the implications of that insensitive question and instead provided a completely Tyler response: “In the immediate future, I see Purdue beating Ohio State!” This, of course, would be a tall task. The Buckeyes were undefeated and ranked #2 in the country. Purdue had a 3-3 record and was a double-digit underdog. But Tyler didn’t care. He had a belief that they could win and he had a belief that he was going to be there to see it happen. As his mother said, “I think it would represent that last time — that last game that he could be at.”

ESPN’s College GameDay showed up in West Lafayette to cover the game and they showcased a feature on Tyler. Getting to the game was a challenge for Tyler. His body had seriously deteriorated, and his dad had to carry him from the house into the car and from the car into the wheelchair. Purdue was kind enough to provide a private suite for the entire Trent family that day. #TylerStrong signs and wristbands could be seen all over the campus. And the Purdue football team played inspired football. Not only did they upset Ohio State, but they pulverized them by a score of 49-20. Near the end of the game, Tyler was wheeled down to the field, and after the game he greeted the players near the locker room. It felt like the football gods were saying, “This one’s for you, Tyler.”

In his final days, Tyler tried to fit in so much. He co-authored his autobiography, entitled The Upset. He also started the Tyler Trent Research Endowment to help fight cancer. As the football season was winding down, Tyler received a standing ovation and the Disney Spirit Award in Orlando, Florida. Then, a few weeks later, he and his gaudy Purdue blazer were in Nashville to watch Purdue finish the season in the Music City Bowl. Unfortunately, just as the doctors forecasted, Tyler’s body could not hold on any longer. On January 1, Tyler died in his home with his family. He was just 20 years old.

The reality is that cancer claimed another victim. And yet, in so many ways Tyler defeated death because his legacy lives on. He inspired so many people because he continued to live his life with passion in the face of certain death. Generations of Purdue students will honor his legacy when they walk through the Tyler Trent Student Gate on football Saturdays. More will honor him by contributing money to his research endowment. As Mitch Daniels, Purdue University President recently said, “No one who lived through the events of the last 12 months will ever forget Tyler Trent.”

Tyler Trent is one of the 144 “Wednesday Role Models” featured in the Student Athlete Program. This program is designed to improve the character, leadership and sportsmanship of high school athletes. To learn more about this program and how you can implement it in your school: