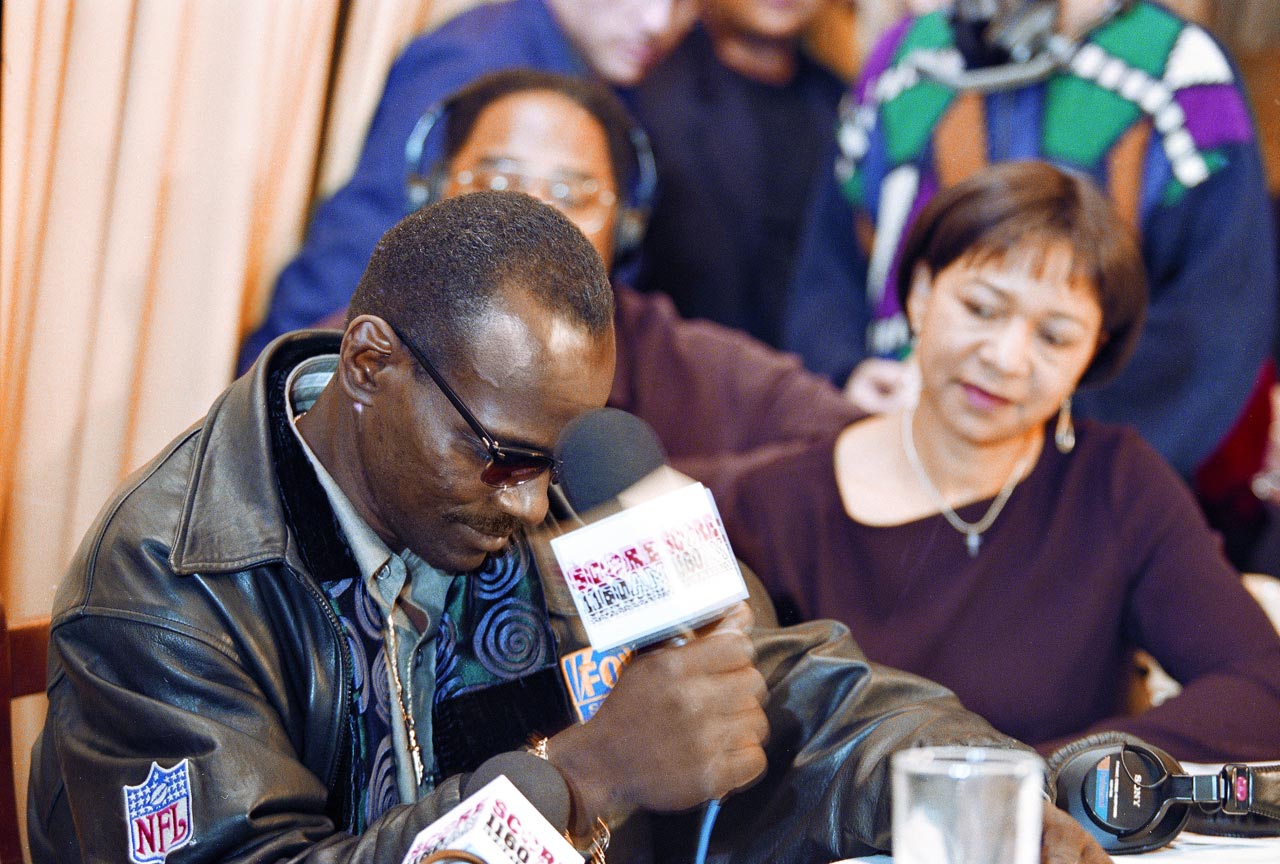 You can’t have a conversation regarding the greatest football players of all time without bringing up the name Walter Payton. Walter’s career spanned 13 years, all of which were played for the Chicago Bears. And during those playing years he set many records, and some of them still stand today. Consequently, Walter was inducted into the Pro Football Hall of Fame. But, as impressive as he was as a football player, Walter Payton also has been remembered equally for the individual he was off the field. He was a man of outstanding character. Walter lived his life in a way that embodied society’s ideals in everything that he had said and done.

Mike Ditka, hall of fame player and coach, not only described Walter Payton as the greatest football player he had ever seen, but also as one of our country’s greatest human beings. Payton’s dual legacy of exceptional-athlete-and-exceptional-citizen is why the National Football League renamed its highest award after him. This award — now, The Walter Payton NFL Man of the Year Award — is intended to recognize and promote the combination of excellence on the field with exceptional community service. Nowadays, those who receive this annual award feel honored to have their character compared to that of the icon who is Walter Payton. Like him, they are being held out as role models for the NFL players and the nation at large; images of citizens who demonstrate society’s highest values.

Walter’s character showed up early in his sports career. He didn’t play football until his junior year of high school, mostly because he didn’t want to compete against his older brother, Eddie. It was a matter of respect. Instead, Walter chose other activities, including the marching band, track, choir, and local jazz bands. After his brother graduated from high school, the coach asked Walter to try out for the football team. Walter accepted under the condition that he could continue to play drums for the marching band.

Once Walter joined the football team, he let his athletic abilities shine. The first carry of his career resulted in a 65-yard touchdown run. He subsequently scored a touchdown in every game he played throughout high school. Despite his accomplishments, Walter did not receive many scholarship offers. He landed at Jackson State University where he had a stellar career. Even while setting records as a football star, Walter remained focused on fulfilling his parents’ dream for him to be a college graduate. He earned a bachelor’s degree in communications. As an aside, it was during these college years that Walter was given the nickname, “Sweetness” because he had such a good-natured way about him, as well as smooth athletic moves. Walter never quit being that way and this nickname stuck with him for the rest of his life. In fact, to this day, if “Sweetness” is mentioned, every NFL fan immediately knows who is being referenced.

After graduation, Walter was picked fourth overall in the 1975 draft by the Chicago Bears. The Bears were a struggling team and needed a spark to rebuild a winning franchise. Walter proved to be that spark. Walter improved with each passing season, and so did his team. He won a Super Bowl with the 1985 Bears, which is widely regarded as one of the best football teams of all time. Even with all that talent on the great team, Walter was the best player on the field. In fact, “Sweetness” is still ranked by many as the greatest player to ever wear a Bears uniform.

In his time, Walter became the all-time leading rusher in the NFL (now 2nd in history) while also holding the record for the most rushing yards in a single game (now 5th in history). Walter was a nine-time pro bowl selection and he was named to the 75th Anniversary All-Time Team. New York Giants linebacker Lawrence Taylor once said, “In my mind, the two greatest players to ever play the game are Jim Brown and Walter Payton, and I can’t even tell you who is first.” Walter could simply run, catch, and block better than almost anyone, and this made him a player of tremendous value. “You could look at him and tell there was something special about this guy,” observed running back Eric Dickerson. “When he hit the field, you just knew it.”

Walter had other-worldly talent as a football player. However, the crucial point of this story is that his outstanding character informed everything that he did as a player. He had all the natural talent one could ask for, but he also trained harder and put more passion into playing than his peers. Consequently, Walter earned every yard and every touchdown during his career. Walter described his playing philosophy this way: “Never die easy. Why run out of bounds and die easy? Make that linebacker pay. It carries into all facets of your life. It’s okay to lose, to die, but don’t die without trying, without giving it your best.”

Consummate player Jim Brown declared, “There’s never been a greater heart and I love heart. I love people with heart. Walter had the heart of a lion.” But he had more than heart. Even on the field, Walter showed respect and kindness. Lawrence Taylor remembered Walter this way: “A nice guy, I mean you could hit him with everything you got and he wound end up helping you up off the ground, you know, that’s the way he was.”

This same heart, respect, and kindness characterized Walter Payton as a public citizen. Throughout his career, Walter used his football fame as a platform to benefit others. For example, as an athlete living in Chicago, Walter helped underprivileged children living on the streets of Chicago. Walter always cared deeply about children in general and these needy ones nagged at him. He devoted his free time and his financial resources. He helped establish daytime childcare and enrichment programs, co-founded a theatre program at an inner-city elementary school, and later established a therapeutic residential home for neglected, abused, and underprivileged kids. He also was concerned about the number of homeless veterans living on Chicago’s streets. What had first begun as an effort to help Chicago’s children branched into an assisted living program for Chicago’s homeless veteran population. Walter’s wife Connie joined him in these programs and these efforts continue to this day through the Walter and Connie Payton Foundation.

Walter Payton is no longer with us. Sadly, he died when he was only 45 years old, just 12 years after his retirement from professional football. The year before, people had begun to notice that Walter had lost substantial weight and didn’t look like his former robust self. Some vicious rumors even began to circulate about what might be going on and there were quiet attacks on Walter’s character. Walter finally decided to hold a press conference. He took the microphone and explained that he had been recently diagnosed with primary sclerosing cholangitis. This is a rare, and often fatal, liver disease. Furthermore, he noted that he was in desperate need of a liver transplant. Near the end of the press conference, reporters asked Walter if he had a message for the people of Chicago. Walter became choked up as he responded: “To the people that really care about me… just continue to pray. And to those of you who are going to say what they want to say, may God be with you also.” Even here, stressed by his expectation of imminent death, Walter nevertheless demonstrated the true nature of his character.

Unfortunately, Walter never received the liver transplant that he needed to survive. He died on November 1, 1999, only nine months after his heart-wrenching press conference. However, Walter’s tragedy is thought by many to have raised Americans’ awareness of the need for organ transplants, which led to an increase in organ donations. So, even in the matter of his death, Walter continued to inspire countless individuals through his example.

Walter Payton continues to be remembered as one of the “all-time greats” as a player and as a person. His character and his passion were the driving forces in his life. Sadly, the younger generations never witnessed Walter play or ever heard him speak. So, to them, this great man may just be an unknown name that appears on an award. This author hopes that this chapter serves as a proper introduction to the namesake behind the Walter Payton NFL Man of the Year Award and that you now fully understand the unbelievable impact “Sweetness” had on humanity.

Walter Payton is one of the 144 “Wednesday Role Models” featured in the Student Athlete Program. This program is designed to improve the character, leadership and sportsmanship of high school athletes. To learn more about this program and how you can implement it in your school: