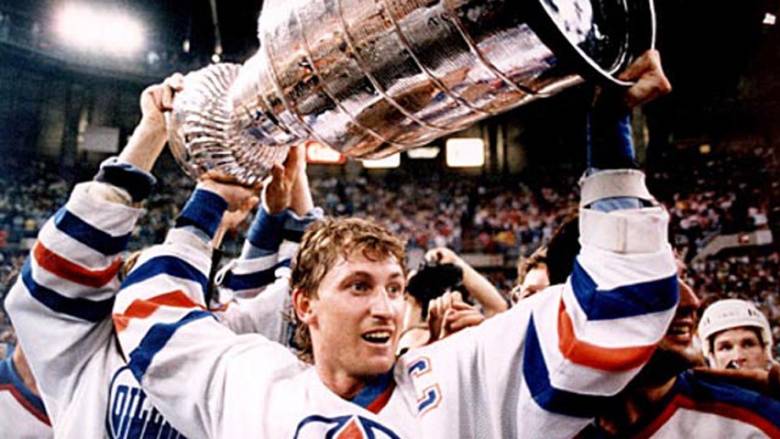 “One of the things about being a celebrity is that you can help people that are less fortunate. That part of being Wayne Gretzky is most rewarding as far as I’m concerned.”

There is essentially no debate – Wayne Gretzky is the greatest hockey player to ever have laced up the skates. The National Hockey League tracks goals, assists, and points (goals and assists combined). Gretzky is the leading career goal scorer, assist producer, and point scorer in NHL history. In fact, if you don’t count his goals scored (894) and only count his assists (1963), he still would have more points than any other player in history. He is also the only NHL player to total over 200 points in one season and he did it four separate times. During Gretzky’s playing career he basically rewrote the NHL record book — and he still holds every major offensive record in the sport. By the time he retired in 1999, he held 61 NHL records.

Known simply as “The Great One,” Gretzky led the Edmonton Oilers to four Stanley Cup victories. When he retired in 1999, for the first time in its history the NHL retired his number “99” across the entire league. It cannot be worn by any player on any team. Moreover, the NHL  also waived the customary waiting period so that he immediately could be inducted into its Hall of Fame. “Gretzky is the Babe Ruth of his sport,” said sports commentator Bob Costas. “Gretzky, as an individual, stood above his contemporaries to an even greater extent than did Michael Jordan.”

The irony is that Gretzky was always deemed too small, too slow, and possessed only an average slap shot. Therefore, as he progressed to each new level of hockey, the naysayers predicted he would fail. Even at the pro level, he only weighed 170 pounds soaking wet, commonly finished last in team conditioning drills, and could barely bench press 140 pounds. However, Gretzky was so well-schooled in the game of hockey that he brought a level of artistry never seen before. “The average guy in the league thinks one play ahead, the superstars think two plays ahead and Gretzky thinks three plays ahead,” recounted player Steve Shutt. Perhaps the best way to sum it up is to say that Gretzky was playing chess out there while everyone else was playing checkers.

Wayne was a classic sports child prodigy. He received his “hockey schooling” from his dad Walter in the small Canadian town of Brantford. Each winter his dad created a hockey rink in his backyard. By the age of 5, he played hockey every chance he got. “All I wanted to do in the winters was be on the ice,” recalled Wayne. And each day Wayne was taught a new lesson by his father. The most important one was: “Hockey is a thinking game. Go where the puck is going, not where it’s been.” At the age of 6, he played on a team for 10-year-olds and dominated. At the age of 9, he scored 195 goals against teenagers. Everyone said that he would never do that again, and he didn’t. The next year he scored 378 goals. And by the time Wayne was 13, he had scored 1,000 goals. Although he was offered a professional contract when he was 15, Wayne’s father made him stay in school. He subsequently moved up in competition each year and finally signed his first pro contract at the ripe old age of 17. He was selected by the Indianapolis Racers of the World Hockey Association. Shortly thereafter, they traded him to the Edmonton Oilers. When the WHA folded, the Oilers joined the NHL — and, as they say, “The rest is history.”

If his exposure to the game of hockey was rooted in family, his passion for the game was rooted in his country. Hockey was invented in Canada, and its long and cold winters made it the “National Game.” So, if baseball is as American as apple pie, then hockey surely has been as Canadian as the ice on which it first was played. Gretzky loved playing for the Edmonton Oilers and Edmonton loved him back. “He took the city by storm,” exclaimed Bill Hunter, the Oilers owner. “Everybody loved Wayne. Everyone talked about Wayne. He was an icon.”

Winning, awards and records soon followed. However, for Wayne, this was a result of doing things the right way. “His genuineness really rubbed off on the team,” stated teammate Mark Messier. “He became a leader because of the way he treated people. He was so much more mature as a hockey player and as a person than we were at the same age.” As the leader, he developed a team-oriented style of play. While Gretzky was the star, it is important to note that he averaged twice as many assists as he did goals. He had just as much pride in a great assist as he had in scoring goals. “Just move the puck: Give it up, get it back, give it up. That’s my whole strategy,” Gretzky said.

After bringing home four Stanley cups, “The Great One” sadly discovered that loyalty doesn’t always go both ways. The world was shocked when Wayne Gretzky was traded to the Los Angeles Kings. One Canadian said it was like trading the King of England to Russia. Most sports enthusiasts agreed that it was the biggest trade in sports history because Gretzky was already the greatest hockey player of all time, playing in his prime, on a championship team. Who does that? Even elected members of the Canadian House of Commons put forth a bill to stop the trade. However, several days later Wayne sat at a podium, openly cried, and said goodbye to the millions of Canadians who wept with him.

On the negative side, Wayne would never win another Stanley Cup after he was traded. On the positive side, he changed the game of hockey in America exponentially. Suddenly it became cool to like hockey and to go to hockey games. The Hollywood movie stars wanted to be seen at the Los Angeles Forum. The sale of team jerseys went from dead last to number one in all of sports. The NHL always had a cluster of teams in the Midwest, Northeast and in Canada, but with the success in Los Angeles, further expansion began to look possible. From the time Gretzky started playing in LA until the time he retired, the league exploded from 21 teams to 30 teams. According to sports reporter Mike Lupica, “Hockey is a sun-belt warm weather sport because of Wayne Gretzky. He is the single biggest reason that this sport exploded the way it did.”

Without question, Gretzky’s success can be analyzed by the numbers. But Wayne Gretzky’s contributions and, more importantly, his character, cannot be reduced to the statistics acquired in the course of his twenty-year professional career. According to teammate Mark Messier, “The lessons that his father taught Wayne really were ingrained in his consciousness, and because of it, Wayne has never wanted to let his parents down.” As such, Wayne protected his reputation. He was cautious. He was responsible. When he went out to dinner and had a drink, he never drove. He never stepped into an elevator alone with a stranger who could accuse him of doing something inappropriate. Therefore, there are no hidden stories and zero controversies about this man. It is almost impossible to find someone who has anything negative to say about Wayne Gretzky, the man.

Throughout his career, Gretzky has given away approximately 700 hockey sticks a year —which he paid for himself. He typically signed over two hundred autographs in a given day. His father would bring over pictures and memorabilia that fans wanted to be signed and place them on Wayne’s dining room table. Every time Wayne walked by the table, he signed 10 or so. He didn’t skip morning skates like other veterans routinely did and he made time for fans and the media. He visited sick kids in hospitals and called friends who were struggling. He founded the Gretzky Foundation to help young people in need. He also took part in thousands of charity events over the years. Despite his busy schedule, he knew it was important to be a positive role model. “One of the things about being a celebrity is that you can help people that are less fortunate. That part of being Wayne Gretzky is most rewarding as far as I’m concerned.”

Wayne always had, and still has, the personal qualities that endear him to people. He is polite, he is humble, and you can’t find a single interview of him boasting about his talents. There were opportunities time and again throughout his life in which The Great One could have made it all about him, but he never did. Growing up as a prodigy, he very easily could have created an ego to go along with his talents. Earning multiple individual awards could have easily led him to forget that hockey was indeed a team sport. When his beloved Canadian team traded him, he could have lashed out publicly and thrown the owner of that franchise under the bus. Time after time, Gretzky demonstrated his exceptional character to the world.

Wayne never lost the humility of a small-town upbringing nor did he forget the people of Canada. He is a family man who has enjoyed a long-time marriage to the same woman for 30+ years, and together they have five children. Glen Sather, his coach in Edmonton, said “I have millions of memories of Wayne, and they aren’t so much what he did on the ice as what he did off the ice.” The fans will undoubtedly remember his goals, his highlights and his wins, but those close to him will always cherish his character and the type of person that he has been. “I’m not the first person to say this. He’s always been a better person than he was a hockey player,” said Sparky Kulchisky, equipment manager for the Oilers. “When you get to know him, you understand why they call him ‘The Great One’.”

Wayne Gretzky is one of the 144 “Wednesday Role Models” featured in the Student Athlete Program. This program is designed to improve the character, leadership and sportsmanship of high school athletes. To learn more about this program and how you can implement it in your school: