“We Need to Learn from Their Example”

“We Need to Learn from Their Example” 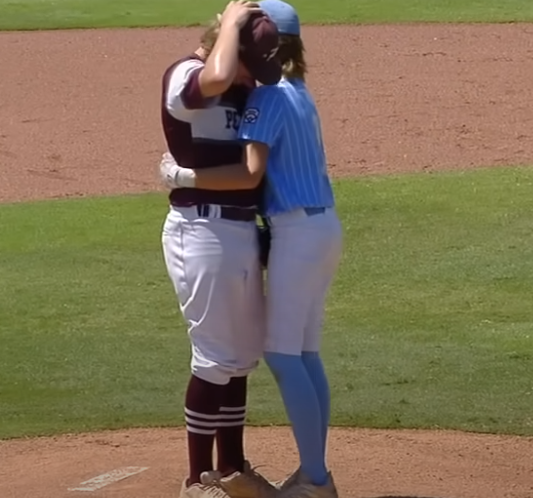 During one of the little league baseball world series games this summer, Kaiden Shelton, a pitcher from the Oklahoma team threw an erant fast ball. At the plate was a hitter from the East Texas team by the name of Isiah Jarvis. The pitch hit Isiah in the head and he quickly went down to the ground. Isiah’s coach said, “It was terrifying. It looked like the ball hit the side of his face and we thought the worst.” However, video revealed that the helmet took most of the blow and it looked a lot worse than reality. In fact, Isiah got up and proceeded to first base.

While standing at first base, he noticed that Kaiden, the pitcher, was still shook up. He then did something that no one had ever seen done before. Isiah walked to the mound and gave Kaiden a hug. After the game, Isiah stated, “I saw him and he was kinda teary-eyed, so I wanted to comfort him and let him know I was going to be okay.”

This game aired live on ESPN, so the sportsmanship displayed by these 12 year olds spread quickly. You can watch it below:

Joe’s Perspective: Everyone playing in that game wanted to win before that moment occurred. Everyone wanted to win after that moment. However, we all have to remember that there are some things more important than winning. The truth is, there are many things more important. One of those things is sportsmanship. Isiah understood what that pitcher was going through and he wanted to help. He didn’t let “wanting to win” get in the way of his humanity. And, here’s the thing to remember, two years from now, no one will remember who won the little league world series. However, everyone who has seen this clip will remember this example of character. They will always remember that inspiring clip of two 12-year-old strangers embracing each other on the athletic field. Isiah’s coach summed it up best when he said, “I started crying like a baby. I mean, I’ve never seen anything like that before in my life.  As adults, we need to learn from their example.”

Your Turn: What lessons do we learn from this clip?