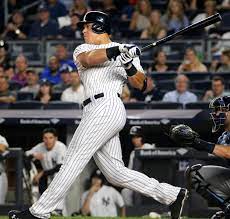 Aaron Judge of the New York Yankees hit his 62nd home run of the season last week. Some say he is the homerun king while others say he is not.  It should be simple, but it isn’t. In 1961, Roger Maris hit 61 home runs, breaking Babe Ruth’s record of 60 that he set in 1927.  Maris’s record lasted a long time. However, in 1998 both Mark McGwire and Sammy Sosa surpassed Maris with 70 and 66 home runs. Three short years later, Barry Bonds hit 73. That era was so much fun to watch. Balls were getting shot out of the yard so frequently and with such velocity. It was amazing to watch. However, this era also became known as the steroid era. As many others from that era, all three of these players were on steroids. These players were huge. Their muscles had muscles. It was too good to be true. They broke the rules to hit that many home runs. They cheated.

It should come as no surprise that since Major League Baseball cracked down on steroids by regularly testing players, the number of home runs also decreased. It was back to normal, proving how difficult it is to hit home runs at such a steady pace. Yet, this year, Aaron Judge managed to hit 62. No steroids. Now, it doesn’t hurt that he is 6′ 7” and weighs 282 pounds. He is a freak of nature, but he got to these measurements without cheating.

Joe’s Perspective: This week’s featured trait is integrity, and I believe integrity matters in sports. Major League Baseball has been clear that these three individuals used steroids in the steroid era. They steadfastly maintain that these 3 individuals will be voted into the hall of fame. So, in my opinion, MLB should go one step further.  I think they should either place an asterisk next to the years that Mark McGrwire, Sammy Sosa and Barry Bonds shattered the home run record or delete them from the record books entirely. It shouldn’t be a “clean record” and a “steroid record.” I don’t believe that cheaters should sit atop of the record book.  What say you?

Your Turn: If you were the commissioner of Major League Baseball, how would you handle the single-season homerun record?