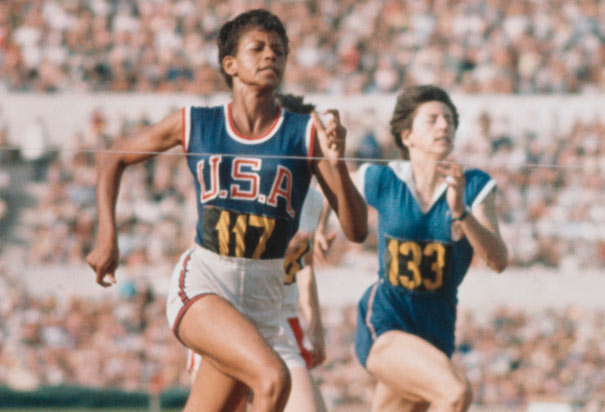 “I had a series of childhood illnesses…scarlet fever, pneumonia and polio. I walked with braces until I was at least nine years old. My life wasn’t like the average person who grew up and decided to enter the world of sports.”

Wilma Rudolph was born on June 23, 1940, into the segregated state of Tennessee. She was the 20th of 22 children to Ed and Blanche Rudolph. Wilma was born prematurely, weighing a meager 4.5 pounds. She was a sickly child who consistently struggled with health issues. You name it, she had it – numerous colds, chicken pox, measles, pneumonia and scarlet fever. At the young age of 5, Wilma faced her most debilitating disease – polio. A side-effect of her polio was something called infantile paralysis. In Layman’s terms, her left leg was paralyzed and she was unable to walk without a brace. Doctors repeatedly told her that she would never walk without this brace.

This is not the resume you would expect to see of a person rated as the greatest athlete (male or female) to come out of the state of Tennessee by Sports Illustrated and the number 41 athlete of the 20th century by ESPN. As Wilma said, “My life wasn’t like the average person who grew up and decided to enter the world of sports.”

There was something special about Wilma Rudolph. She was determined to persevere over all the obstacles that life handed her.  At first, her goal was simply to walk unassisted. Twice a week, she traveled to a hospital in Nashville for 4-hour painful treatments on her leg. As a testament to her character and her determination to be successful, she reflected, “My doctors told me I would never walk again. My mother told me I would. I believed my mother.” Unbeknownst to anyone, at the age of 9, she took off her brace and walked into church on a Sunday morning in May. She would wear an orthopedic shoe on her left foot for the next two years.

Wilma had a difficult childhood. In addition to being sick and needing assistance to walk, kids frequently teased her for her abnormalities and her frailty.  The young Wilma longed to be accepted and this theme had long-term effects on her psyche. She gravitated to sports because it helped her become more socially accepted. Basketball was her early sport of choice. As it turned out, she had better-than-average skills.  By the time she reached 9th grade, Wilma was 6 feet tall. In one game, she scored 32 points and never missed a shot. After that feat, she commented, “I was somebody in school after that, for the first time.”

She ran track simply to stay in shape for basketball. However, she quickly discovered that she was pretty fast. During her sophomore year, she captured the attention of Coach Temple from Tennessee State University. He invited Wilma to a summer camp to train and compete against girls from across the country. She did quite well.  So well in fact that coach Temple convinced her to attend the Olympic trials in Seattle, Washington. At the age of 16, she qualified to represent Team USA in the 100 and 200-meter dashes.

Just a few short years after wearing a brace to walk, Wilma was representing her country as one of the fastest female sprinters in the world. It was like a dream come true. Although Wilma failed to make the finals in either event, she did win a bronze medal in the 400-meter relay. Can you imagine what that did for this 16-year-old’s self-confidence? Instead of struggling for acceptance, Wilma was now admired for her athletic ability.

Wilma continued to play basketball and run track. She spent time with friends and even found love. However, during a routine physical during her senior year, doctors discovered that Wilma was pregnant and that her boyfriend, Robert Eldridge, was the father. Her family quickly rallied around her. Wilma decided to keep the pregnancy, but her family decided that she was not ready to take on the full-time responsibilities of motherhood. When Yolanda was born, Wilma’s older sister took custody of baby Yvonne. This freed Wilma to accept a full-ride athletic scholarship to Tennessee State University to pursue her dreams of being an Olympic sprinter.

Wilma arrived in Rome for the 1960 Olympic games as the favorite to win the 100 and 200-meter dash. Temperatures reached a stifling 100 degrees during the day causing difficulty for many runners. Not so for Wilma who grew up in the hot and humid state of Tennessee. She easily won the 100-meter dash in a world-record time of 11.0 seconds. A few days later she breezed to a comfortable win in the 200-meters. On the final day of the Olympic games, Wilma was set to anchor the 400-meter relay team. She received the baton in good shape, but bobbled the baton. She found herself behind the Russian sprinter with ten meters to go. Wilma closed quickly and lunged at the tape. It was a photo finish. The judges referred to the video and finally declared USA the winner, setting a new Olympic record in the process.

This sickly girl who walked with a brace was now the world’s fastest woman. Wilma Rudolph was the first American woman to win three gold medals in one summer Olympics. It was an improbable story, but as Wilma said, “The triumph can’t be had without the struggle, and I know what struggle is.”

Wilma did not have a long track career. She retired two years later at the ripe old age of 22. Wilma decided to focus on her family and gave birth to three more children. Much of her work was dedicated to helping children set big goals and women start to move toward equality in sports. Wilma was instrumental in lobbying for Title IX, which provides equal treatment for women in college sports. Her legacy was complete. “I would be disappointed if I were remembered as a runner because I feel that my contribution to the youth of America has far exceeded the woman who was the Olympic champion.

Wilma Rudolph left this world in much the same way that she entered it – prematurely. Wilma died shortly after being diagnosed with brain cancer at the age of 54. She might always be remembered as the first American woman to win 3 gold medals in a summer Olympics and as the woman who briefly held the title as the fastest woman in the world. For our purposes, we choose to focus on her ability to persevere time and again during her lifetime. As she said, “‘I can’t’ are just two words that have never been in my vocabulary.” The world is thankful that she decided to follow her mother’s encouragements rather than her doctor’s predictions.

Wilma Rudolph is one of the 144 “Wednesday Role Models” featured in the Student Athlete Program. This program is designed to improve the character, leadership and sportsmanship of high school athletes. To learn more about this program and how you can implement it in your school: