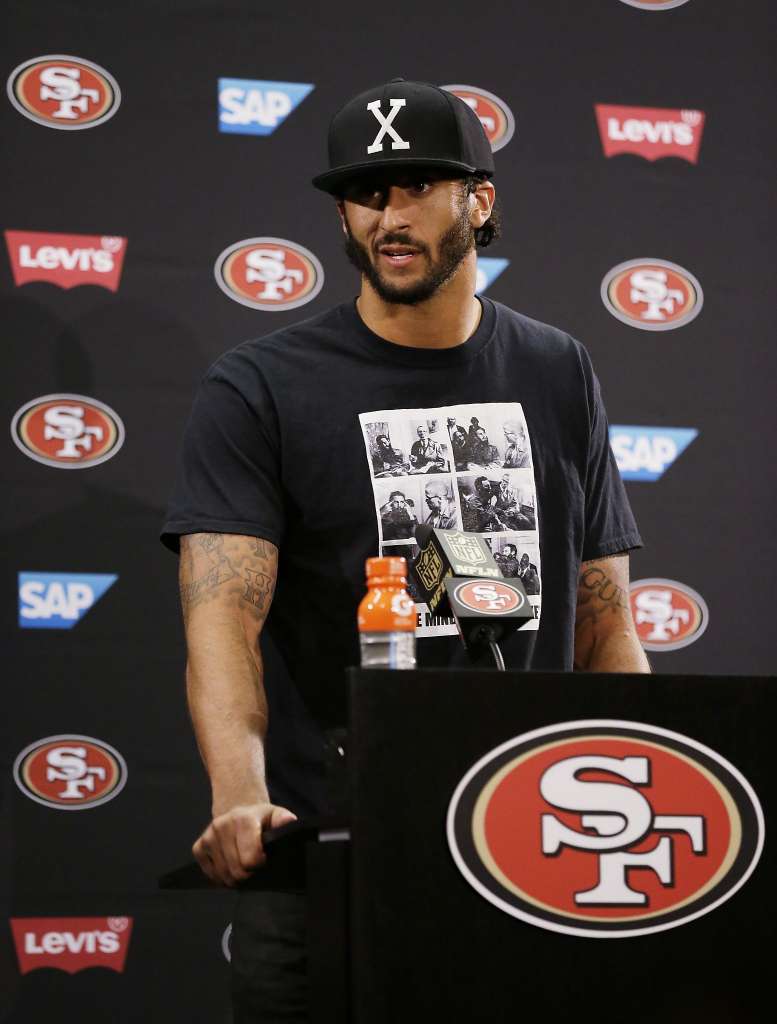 Colin Kaepernick is a quarterback with the San Francisco 49ers and his actions this week put him squarely in the crossfire of controversy. Before every pre-season game this season, he decided to sit for the national anthem. This time, however, a reporter spotted it and “broke the story.” Following this week’s game against the Green Bay Packers, Kaepernick’s locker was surrounded by a swarm of reporters with lots of questions.  Kaepernick answered every question and spoke for more than 18 minutes.  I hope you can watch at least some of the 18 minute video below, but here is some of what he had to say.

“There are a lot of things that are going on that are unjust, people aren’t being held accountable for, and that’s something that needs to change. That’s something that-this country stands for freedom, liberty, justice for all. And it’s not happening for all right now.”

“There have been situations where I feel like I’ve been ill-treated, yes. But this stand wasn’t for me. This stand wasn’t because I feel like I’m being put down in any kind of way. This is because I’m seeing things happen to people that don’t have a voice, people that don’t have a platform to talk and have their voices heard and affect change. So I’m in a position where I can do that and I’m going to do that for people that can’t.”

“I am not going to stand up to show pride in a flag for a country that oppresses black people and people of color,” “To me, this is bigger than football and it would be selfish on my part to look the other way. There are bodies in the street and people getting paid leave and getting away with murder.”

Pro: Kaepernick is exercising his rights as an American citizen. He has freedom of speech afforded by the U.S. Constitution and the Bill of Rights. He is merely exercising his rights and taking a stand on an issue that means a lot to him.  He is expressing himself in a non-violent manner that only puts himself in harms way. He has observed and formed an opinion about how black people in this country are treated. He is trying to bring awareness to the inequities and the oppressive behavior he views as a part of the American society. He is taking a stand so that we, as Americans, can have a discourse about such issues, and in his eyes, make appropriate changes.  How can that be so wrong?

Con: What a hypocrite. Kaepernick refuses to stand for the national anthem, yet continues to get paid millions of dollars in an America society that has afforded him wealth and privilege as a black man. He can’t even see the irony of refusing to stand and show respect for a country that has afforded him the opportunity to thrive doing something that he loves. You don’t see him refusing to accept the dollar bill created as a protest. You don’t see him donating those millions of dollars to the causes he professes to believe in. Standing for the national anthem is our small way of showing respect for our country and to the men of women who have fought to provide us with these freedoms. In a subsequent interview he has the gall to wear a shirt with communist Cuba dictator Fidel Castro on it.  If he wants to really understand oppression and inequality, maybe he should (permanently) visit Cuba and see what happens to people like him who speak out against the government.

Your Turn (no profanity, please):