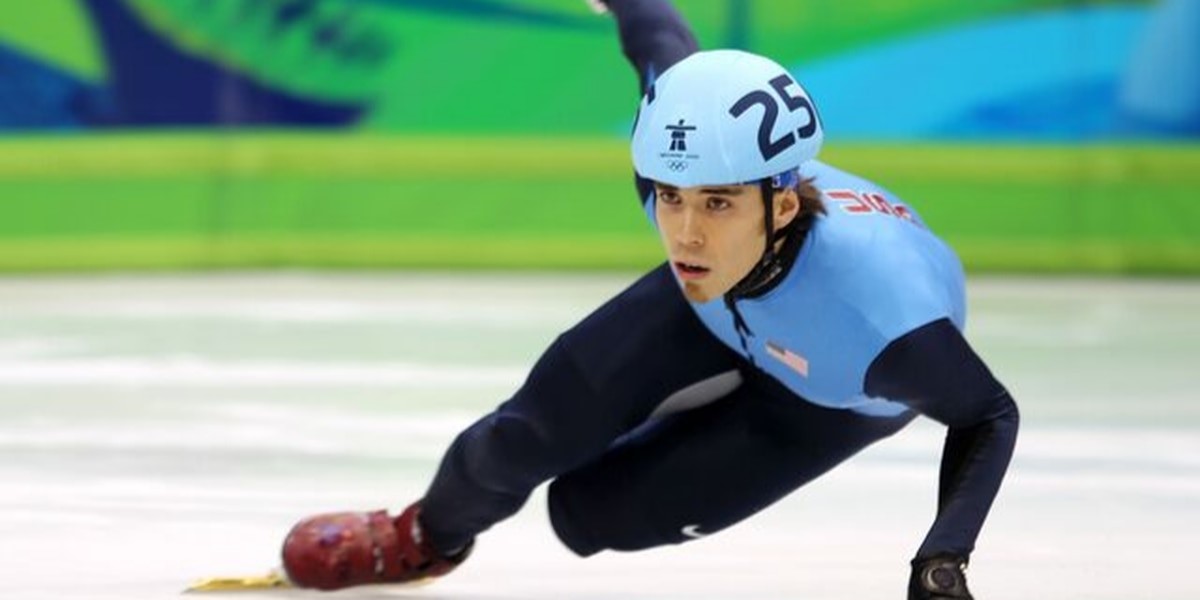 “There’s no greater satisfaction in the world than knowing you were all you could ever be.”

In 2002, Apolo Ohno won his first gold medal in short track speed skating. In 2004 he won his second gold medal. In 2010, Apolo became the most decorated American in winter games history when he won his eighth Olympic medal. You can look all over the world and not find an athlete who trained harder, competed more fiercely, or wanted to win more than Apolo. Apolo defined the term “dedication.” In his own words: “I decided to take a singular path in preparing for the Olympic games, one that was lonely, one that was hard, one that most would shy away from.”

The irony is that this man — who singlehandedly changed the sport of short track speed skating and raised the bar for every athlete to come after him — almost quit. At the age of 14, he was one of the best speed skaters in America. He was the kid from Seattle with a lot of potential. He was raw and talented. And, even though he hardly trained, had almost zero coaching, had lousy skates wore outfits that got him teased by the skating elites, he continually beat the best skaters in his age group.

After a big race in Vancouver, Canada, a U.S. coach invited Apolo to join the U.S. junior development squad at the Olympic Training Center in Lake Placid, New York. Apolo’s father was ecstatic about his son’s opportunity. He was an immigrant from Japan and he had singlehandedly raised Apolo from day one. However, Apolo was not thrilled by the invitation. This was because he had become involved with the wrong crowd in Seattle and his idea of summer included going to the beach, hanging out with friends, meeting girls, and partying. So, father and son argued incessantly. Mr. Ohno would yell, “This could be your ticket to the 1998 Winter Olympics! You are going!”  His son would reply: “I don’t care. I’m not going.”

Finally, on June 29, 1996, Mr. Ohno packed Apolo’s bags, drove him to the airport, gave him his ticket, and said goodbye. But Apolo remained defiant. He called some friends and had them pick him up at the airport. For the next week he partied and slept at different friends’ houses. So, when the junior national coach called to tell Mr. Ohno that they were holding a slot open for his son and were wondering when he would arrive, Mr. Ohno flipped out. He located Apolo and urged him to come home. A week later, Mr. Ohno once again bought a plane ticket for his son. However, this time he bought himself one as well so he could accompany Apolo all the way to Lake Placid. When he dropped off Apolo, he said, “Good luck!” This statement wasn’t directed at Apolo. Mr. Ohno said it to the coach. The unspoken message was clear, Good luck with this kid. You’re going to need it.

At age 14, Apolo was the youngest skater ever admitted to the junior development training center. It was a difficult transition for him and he still was defiant. On long runs, he purposefully hung back and stopped at a restaurant to scarf down pizza before rejoining his teammates on their way back. The other team members nicknamed Apolo “Chunky” because he was so out of shape. And, although he had flashes of brilliance, Apolo did not make the junior national team. Moreover, the following year Apolo finished a dismal 16th out of 16 at the trials for the 1998 Winter Olympics. Apolo would watch those Olympics from his living room in Seattle.

The following summer, Mr. Ohno took Apolo to an isolated cabin far from his mischievous friends. He told his son: “I don’t care what path you go on in life. But whatever that is, you truly have to do it one hundred percent. You need to come to a decision.” He then left Apolo in the cabin to figure it out. This seemed to be the turning point in Apolo’s life. For nine solitary days he ran, he biked, he lifted weights, and he prayed. Then, when his father returned to take him home, Apolo emphatically told him: “I want to skate. I’m all in.”

Apolo clearly had come to recognize that he was wasting his gift. He concluded that potential in the absence of work ethic didn’t amount to much. So, when Apolo returned to the Olympic training center, he told his coach “I want to handle a level of pain and fatigue that would seem impossible to others.” Apolo wanted to become a machine, and he succeeded. In 1999, Apolo won the World Junior Championships. He also went on to win the World Cup overall title in 2001, 2003, and 2005. He won the overall World Championship title in 2008.

In doing so, Apolo singlehandedly changed the way athletes trained, the way they raced, and the way they approached the sport. He focused on weight training, nutrition, meditation, mental preparation, and recovery techniques. His single-minded focus became the standard for aspiring champions in all sports. The last thought he had each night before he went to bed was the same thought he had before every race: “No regrets.”

“No regrets” was more than a mantra. It was a reality. In short track speed skating it is entirely possible to be the best skater in the best physical condition and still not win. When six skaters are going 40 mph around a short oval track, jockeying for position, anything can happen and usually does. Many races involve a chaotic finish with one or more skaters going down in a heap as they attempt desperate passes late in the race. Getting slammed into the boards, getting sliced by a razor-sharp skate, or getting pulled to the ground, are merely occupational hazards. Apolo knew he couldn’t control all those factors. He could only give it his best effort and let the chips fall where they may. No regrets.

A perfect example of this came in the 2002 Winter Olympics. In the 1,000-meter finals, Apolo had made a big move to take the lead with two laps to go. He entered the final turn and he could see the finish. A Chinese skater tried to pass on the outside while a South Korean attempted an inside pass. There just wasn’t enough room for all three of them. In total, four athletes went down 10 feet from the finish line. An Australian who was half a lap behind took the gold. Apolo scurried to his feet and stuck his left foot over the finish line for a silver medal. When reporter Bob Costas asked if he was disappointed, Apolo responded: “Oh, not at all… The number one thing was to be able to just step on that line, come as prepared as possible and get off the ice satisfied that I skated the best race of my life.”

A few nights later, Apolo was in second place of the 1,500-meter finals with one lap to go. He saw his opening and attempted a pass on South Korean Kim Dong-Sung’s inside. However, Dong-Sung moved to the left to block Apolo’s move. Apolo slowed and raised his hands in protest as he coasted to second place. A few moments later, the judges ruled the move a “foul,” and disqualified the South Korean. Apolo was awarded the gold medal. Euphoria. “They can throw me in the desert and bury me,” he told reporters. “I got a gold medal. I’m good now.”

This young 19-year-old kid had just won two Olympic medals at the 2002 Salt Lake City Winter Olympic Games. Four years later, the 23-year-old veteran would win three more Olympic medals in Turin, Italy. By 2009, Apolo was now the old man in the sport. He knew he would have to dedicate 100% of himself to qualify for the 2010 Winter Olympics in Vancouver. So, that is what he did. For five months, he isolated himself — no cell phones, computers, or other outside distractions. Every moment from 5 a.m. to 10 p.m. was dedicated to becoming the most finely tuned athlete in the world. He logged 850 miles on a treadmill and leg pressed 1,980 pounds, while holding to the strictest of diets. He sometimes sat in a 270 degree sauna long enough to count 1,000 drips of sweat falling from his nose. Apolo lost 20 pounds in this transformation. On the eve of the Olympics, he weighed in at 145 with a body fat content of 2.5%. “Come these Games, there’s no one who’s going to be fitter than me, nobody’s even close,” Apolo said. “I’ve never prepared like this in my life — for anything. I want to leave nothing on the table.”

Just like in life, not everything went as Apolo planned during those Olympic games. Nevertheless, he did win three more medals and thereby became the most decorated American winter athlete of all time. Apolo retired shortly thereafter, saying, “There’s no greater satisfaction in the world than knowing you were all you could ever be.” In his autobiography appropriately entitled, Zero Regrets, he provided the following guidance to the next generation: “If you want something, you have to be 100 percent clear in how you plan to get it. You have to be relentless in your pursuit.”

Apolo Ohno is one of the 144 “Wednesday Role Models” featured in the Student Athlete Program. This program is designed to improve the character, leadership and sportsmanship of high school athletes. To learn more about this program and how you can implement it in your school: