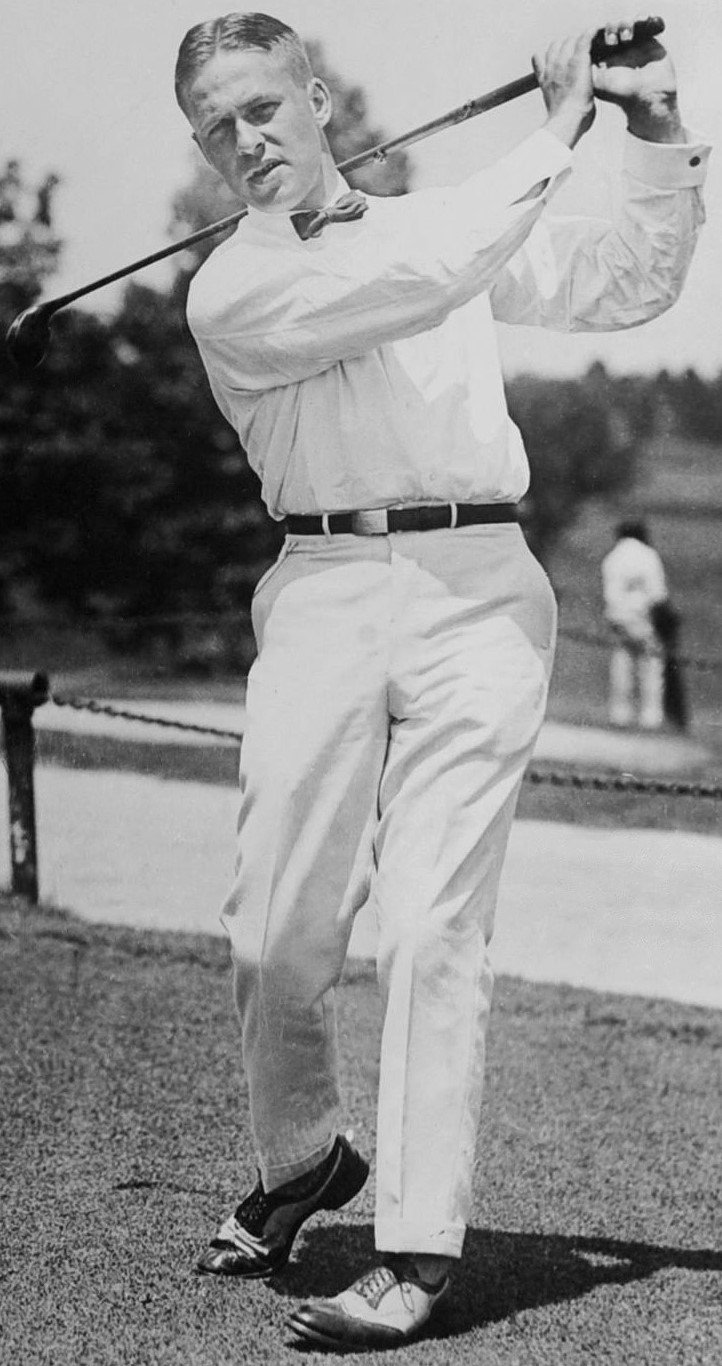 “There is only one way to play this game.”

In 2000, Golf Digest ranked Bobby Jones as the fourth greatest golfer of all time. In 2009, Golf Magazine ranked him as the 3rd greatest golfer behind Jack Nicklaus and Tiger Woods. In his youth Nicklaus said the following, “Jones is the greatest golfer who ever lived and probably ever will. That’s my goal. Bobby Jones. It’s the only goal.” However, most teenagers today have never heard the name, Bobby Jones.

The main reason is that he retired in 1930. During his era he was a rock star before there ever was such a thing as a rock star. He was considered one of the five giants of America’s sports scene in the 1920s. Bobby Jones was lumped in with baseball’s Babe Ruth, boxing’s Jack Dempsey, football’s Red Grange, and tennis player Bill Tilden. Jones also is on a very short list of individuals who had received two ticker-tape parades in New York City.

Jones is the only golfer to ever win the grand slam of golf, winning all four of golf’s major tournaments in one calendar year. If truth be told, the four major tournaments recognized in the 1920s were not the same tournaments that we refer to today as the “four majors”.  Still, Jones won all four in his era. The New York Times wrote that Jones “had taken the most triumphant journey that any man ever traveled in sport.” Many golfers in the past century have attempted to win the grand slam in one year. All but Bobby Jones have fallen short.

Despite the fame and the money, Jones remained an amateur golfer his entire career. He never turned pro. As an amateur, he was required to turn down all prize money that came from each tournament. Instead, he supported his wife and three children as an attorney in Atlanta, Georgia. (He received degrees from Georgia Tech, Harvard and Emory University.) When asked why he remained an amateur, Jones said that he played golf because he loved it. He inherently knew that as soon as he placed $1 on a match, it would become all about the money.

Undoubtedly, Jones’ biggest contribution to the game of golf is the Augusta National Golf Course. At the age of 28, he had immediately retired after winning the grand slam, never to play another competitive round of golf. At the time, he was one of the most recognizable names in the world. But he still loved golf and he wanted to play golf away from the watchful eye of the adoring public. So, in 1933, he purchased a piece of property in Augusta, Georgia, and began building a golf course with famed architect Alister MacKenzie. The private club opened in 1933. The following year he founded the Masters Tournament and it became one of the four majors contested annually. To this day, Golf Digest ranks Augusta National as the best golf course in the world.  Not bad for an amateur, hey?

These accomplishments alone are a legacy as grand as any golfer who has ever lived. Still, Bobby Jones is probably best remembered in golf lore for his integrity, his principled nature, and his honesty.  This is best illustrated by the multiple examples of calling penalties on himself in competitive golf. He did it on four separate occasions, most notably in the 1925 US Open at Worcester Country Club.

Jones entered the tournament like he entered most tournaments in the 1920s — as the favorite. In the opening round, he was paired with legendary golfer, Walter Hagen. Jones was struggling with his irons that day and, on the 11th hole, he hit his approach shot short and to the left. He was in tall grass. As he addressed that shot, his club inadvertently caused his ball to move ever so slightly. He called over the rules official following the group and told him what happened. The official immediately conferred with Hagen and several members of the gallery. It was determined that no one had seen the ball move. The official told Jones that he and he alone could make such a determination. Jones did not hesitate. He said, “I know I caused the ball to move,” and he gave himself a one-stroke penalty.

Before he signed his score card his partner begged him to reconsider. Hagen, as well as the officials, believed that Jones was too hard on himself. However, Jones insisted. He had violated Rule 18, “moving a ball at rest after address,” and would hear no reasoning to the contrary. When a reporter congratulated him on his honesty, Jones admonished the reporter saying, “You might as well praise me for not robbing a bank.”

As it turns out, that one stroke cost Jones dearly. At the end of the tournament, he found himself tied with Willie Macfarlane. On a day that was reportedly “102 degrees in the shade,” they played an 18-hole playoff. Still tied after this playoff, they played another 18-hole match in the afternoon. Going into the final hole, both players were still tied. After Macfarlane hit his ball safely on the par four 18th hole with his second shot, Jones decided to end the playoff one way or another. He aggressively attacked the pin, which was tucked on the front right portion of the green. Unfortunately, his approach shot found the bunker and Jones ultimately lost this grueling playoff. After the tournament, journalist O.B. Keeler wrote, “I am prouder of him than if he had won. There are things in golf finer than winning championships.”

In fact, Jones called another penalty on himself the following year, again at the 1926 US Open. This time he placed his putter behind his ball just as the wind strengthened. Again, no one saw the ball move, but Bobby didn’t hesitate. Again, he gave himself a one stroke penalty. But this time the lost stroke didn’t cost him. He won the championship by one stroke. When asked about these events and other self-imposed penalties by a biographer, Jones simply put up his hand and said firmly, “There is absolutely nothing to talk about, and you are not to write about it. There is only one way to play this game.” The only other words he uttered about these incidents can be found on golf posters that read, “When you cheat in golf, the only person you’re cheating is yourself.”

At the age of 28, Jones promised his wife that he would quit competitive golf. He had done everything he set out to do in the game of golf. He had won 13 major championships and had attained the grand slam of golf. Therefore, he decided to spend more time as a husband, father, and lawyer. When World War II broke out, the now 40-year-old Jones enlisted in the Army. He refused his first cushy assignment to entertain the troops by playing golf matches. Instead, he was part of a brigade that invaded Normandy on June 7, 1944. He and his company saw plenty of action. Jones rose to the rank of Lieutenant Colonel before being honorably discharged at the end of the war. Jones would be later diagnosed with syringomyelia. This is a crippling spinal disease that causes paralysis. And, in 1971, it led to his death at age 69.

Golf will not soon forget Bobby Jones. His honest ways still set the example for all golfers today. The tradition of the game still requires players to enforce penalties on themselves instead of relying on referees to do so. To this day, the United States Golf Association gives out an annual sportsmanship award named the Bob Jones Award. This award underscores the fact that wins and championships are only truly meaningful when the competitors win them honestly. The integrity of an athlete mattered then and it still matters today.

Bobby Jones is one of the 144 “Wednesday Role Models” featured in the Student Athlete Program. This program is designed to improve the character, leadership and sportsmanship of high school athletes. To learn more about this program and how you can implement it in your school: