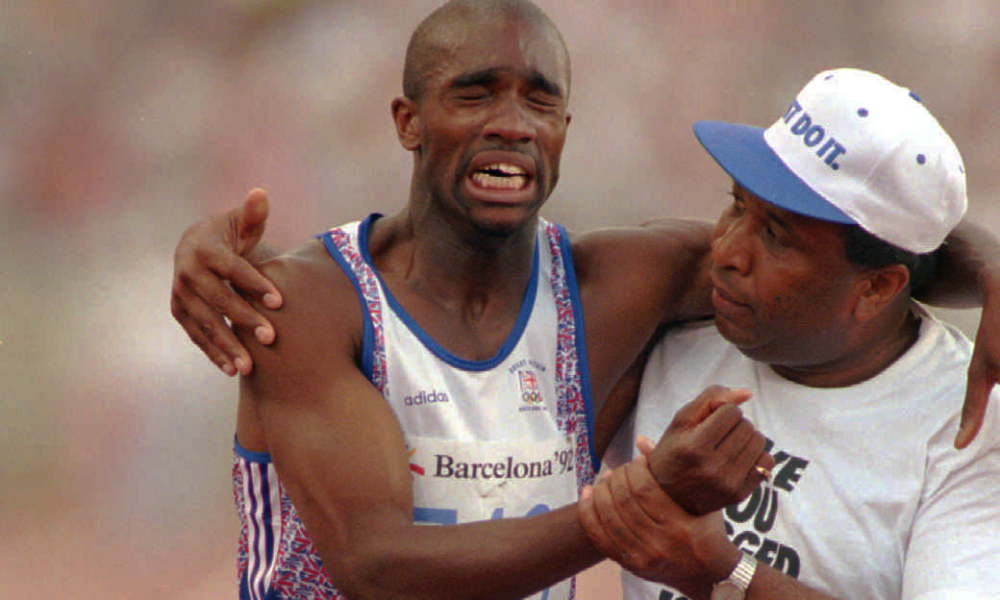 Let’s set the scene. At the 1992 Barcelona Olympic games, Derek Redmond stepped into the lane 5 starting blocks to run the 400-meter semi-finals. The previous day, Derek had run the fastest time in the preliminary round. His goal was simple — finish in the top three to qualify for the finals. “Runners set,” and a short moment later, the gun went off. Derek got off to a quick start and he immediately went into his familiar stride across the backstretch. With 250 meters remaining, Derek was in the perfect position to qualify.

Derek had the respect of his peers. Years before, as a 19-year-old, he had broken the British record in the 400-meters. Years later he would break it again as a veteran runner. Derek had been a part of the British 4 x 400-meter relay team that had upset the heavily favored American team at the 1991 world championships. He had earned his way onto the British Olympic team in 1992 and was expected to win a medal, and maybe bring home the gold.

Then, with only 240 meters remaining in this semi-final heat, Redmond heard a pop. Five meters later, he felt a searing pain in the back of his leg. Instinctively, he grabbed his leg and began to limp. He then fell to the ground in anguish. Derek immediately recognized that he tore his hamstring muscle. He knew his Olympic dream was over. And so did the announcers: “Redmond has broken down. He’s on the track, kneeling down.” Derek put his hand over his face and began to cry. He laid down on the track, flat on his back.  He was in obvious despair.

Years later, when he was asked about his thoughts at that moment, Derek recalled: “Then I remembered where I was. And it was like (snaps his finger), you’re in the Olympic semi-finals. And that’s what made me get up and start to run — or hobble. And, I just thought, you know what, I’m going to finish this race. It may be the last race I ever run, so I’m going to finish it. Not for anyone else, but just for me.”

Epitomizing the true Olympic spirit, Redmond began limping around the track. About 120 meters from the finish, a man came barreling down from the stands. He broke through security and ran up behind Derek’s left shoulder. The man said, “It’s me. You don’t have to do this.” Derek immediately recognized this man’s voice. It was his father, Jim Redmond. Now sobbing, Derek responded emphatically, “Yes, I do!” His father put his arm around his son and said, “Well then, we’re going to finish this together.”

“Up until then, I managed to keep all of my emotions in and hold it together relatively well,” Derek recalled years later. “But as soon as I saw him, that was it, I lost it all. I was in tears.” Derek put his arm around his dad and slowed to a walk. This walk was all about them. All those years they spent going to meets. All the effort. All the sacrifice.

The two of them walked the remaining 100 meters to the finish line. Three different race officials tried to stop this duo from finishing. After all, no one knew who this strange man was. In addition, once a runner receives assistance, he or she automatically is disqualified. However, at that moment neither Derek nor Jim Redmond cared about the rules. So, even though Jim Redmond’s words might have been inaudible to the onlookers, his response was clear and distinct. In no uncertain terms, he was ordering each race official to get away and to let them finish.

“Get me back in lane 5,” Derek said to his father. “I just want to finish.” As they crossed the finish line, Derek repeatedly placed his hand over his face. He seemed embarrassed to be expressing such intense emotions in front of such a large audience. Every time that Derek placed his hand over his face, his father intuitively pulled Derek’s hand away. He wanted to tell his son that he had absolutely nothing to be ashamed of. Jim had this to say about his son later that day: “I’m the proudest father alive. I’m prouder of him than I would have been if he had won the gold medal. It took a lot of guts for him to do what he did.”

The crowd shared Jim’s sentiments. There were 65,000 people in the stands and they all got to their feet and cheered. There weren’t many dry eyes in the stadium that day. Derek had inspired them and the millions watching on television. Of course, most of these people did not know Derek personally. Nevertheless they seemed to fully understand what he was going through. They recognized the courage it took to get up and continue. They empathized with how Derek must have been feeling at that moment.

According to the official record book Derek Redmond never finished that Olympic race in 1992. He is listed as DNF – Did Not Finish. However, we all know better. If you google the top 10 most inspirational Olympic moments, every source lists him in the top three. Nike, Visa, and other prominent companies have used this vignette in commercials. NBC commonly uses the image to showcase the Olympic creed: “The most important thing in the Olympic Games is not to win but to take part, just as the most important thing in life is not the triumph but the struggle. The essential thing is not to have conquered but to have fought well.”

Although this event occurred decades ago, Derek continues to receive letters and emails from people worldwide. He says that, even though most of these people have not been athletes, his efforts that day inspired them to get back up and keep fighting. “It’s quite strange that people to this day still find it inspiring,” Derek reminisced. “It’s a nice feeling to know that I’ve helped so many people.”

Derek Redmond is one of the 144 “Wednesday Role Models” featured in the Student Athlete Program. This program is designed to improve the character, leadership and sportsmanship of high school athletes. To learn more about this program and how you can implement it in your school: