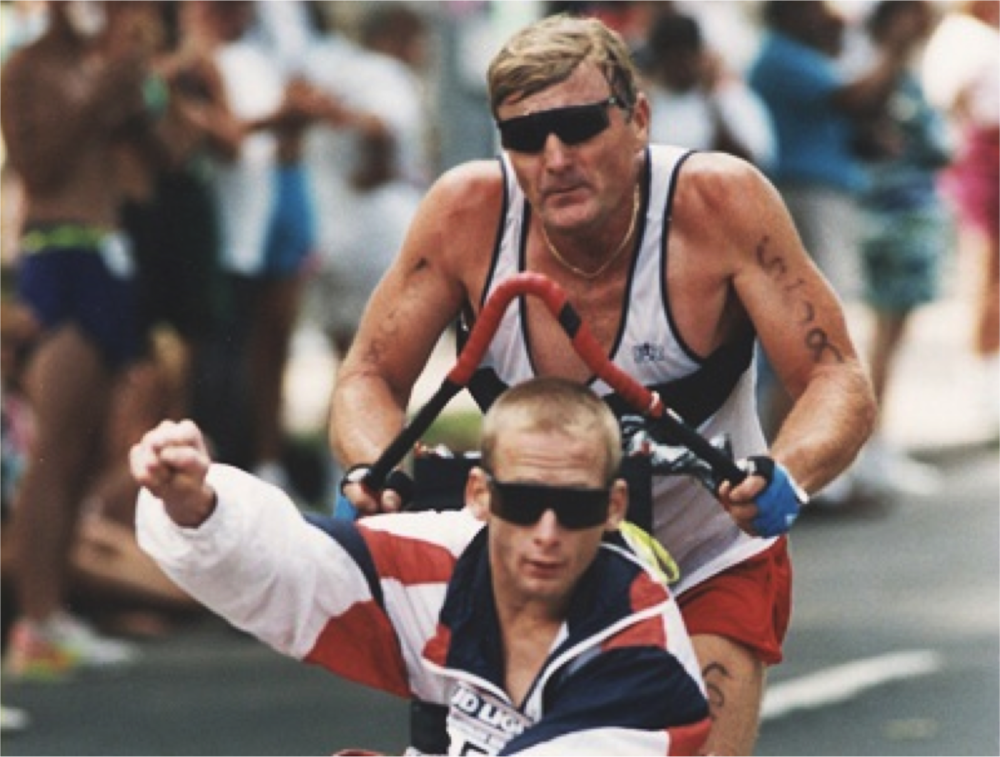 “It was a labor of love; a love between a man and his son – a man who had patience equaled only by his son’s courage.”

Dick and Judy Hoyt were high school sweethearts. They married in 1960 while they were both in their early 20’s and, within a year, Judy became pregnant. They were very excited about the impending birth of their son, Rick. When the big day arrived, as was customary in that era, Dick waited in a waiting room set aside for expectant fathers. The doctor approached the pacing father to tell him that the mother and child were struggling.

Baby Rick was facing the wrong way, which meant the medical staff had to turn him in the womb so he could have a normal delivery. However, in the process of turning Rick the umbilical cord got tangled around his neck. This shut off the flow of oxygen to his brain and caused immediate irreparable damage. Rick was born motionless. No sounds came out of his mouth. He was breathing, but he couldn’t voluntarily control his arms, legs, or torso. His father summed it up: “Rick did not do the things normal babies do.”

A few months into life, the Hoyts took young Rick to a specialist in Boston. The diagnosis – a spastic quadriplegic with cerebral palsy. Sobbing, with their heads between their knees, these new parents received the following advice from this so-called specialist, “Your boy is a vegetable. Put him in an institution and forget him.”

This doctor underestimated both the resiliency of the Hoyts and the abilities of Rick. Yes, Rick would never be able to use his limbs or talk, but his brain had the ability to comprehend. Rick could learn. Rick could think. In time, his parents would understand that Rick was intelligent and had a vibrant personality. The first signs came from Rick’s eyes. Despite not being able to speak, Rick could communicate with his eyes.

The Hoyts continued to tell everyone that Rick’s mind was working correctly. They told their story to a psychologist at the Children’s Hospital in Boston. This new doctor listened and gave these parents much different advice from the previous doctor, “Treat him like every other child.” And so they did. As Rick grew from a toddler into a young child, Dick took him sledding, boating, swimming and fishing. Judy taught him the alphabet and kicked Rick’s education into high gear.

Because Rick could only communicate with smiles and slight nods, the only people who believed in Rick’s intelligence were his parents. The big breakthrough came when Rick turned 12. The Hoyts partnered with engineers from Tufts University to build a device that would allow Rick to communicate with the world. The Hoyts referred to it as the “Hope Machine.” The Hope Machine was a computer with a cursor capable of highlighting letters in the alphabet. This contraption let Rick spell out words by tapping his head against an attached headpiece.

In a classic story that has been retold thousands of times, Rick’s family members debated what his first words would be. “Hi Mom” or “I love you Dad” were good bets. After the first several ticks from the machine, Rick’s message became clear, “Go Bruins.” This was in reference to the Boston Bruins who were playing for the Stanley Cup Finals. Apparently, among other things, Rick was an avid sports fan.

At the age of 13, Rick told his father that he would like to compete in a charity 5-mile race; a fundraiser to help a local lacrosse player who recently had been paralyzed in an accident. Dick, a casual runner, agreed to push his son in a rudimentary chair with wheels. Despite the lack of training and the wobbly wheels, Team Hoyt finished the race. They were second to last, but they finished. When they crossed the finish line, Rick lifted his arms and beamed with delight. “He had the biggest smile on his face you have ever seen in your life,” said a proud, yet tired Dad. That night, Rick typed the following words, “Dad, when I’m running, it feels like I’m not handicapped.” Upon reading this short message, Dick broke down in tears.

This race proved to be a pivotal moment in the lives of both father and son. Dick instinctively knew that he could give his son an athletic experience that others took for granted. Just as the “Hope Machine” freed Rick’s mind, racing would free his body. To make this happen, Dick began to train seriously. He would run with a 100 lb. bag of concrete strapped to ever-improving running chairs. Rick’s job was to complete high school, and eventually college. Together they were strengthening their father-son relationship through the formation of Team Hoyt.

This is how it went. After that first charity race, Team Hoyt averaged one race per weekend and sometimes two or three. Dick provided the physical abilities to compete in these races, but Rick provided the inspiration. “Rick had the real killer instinct, and if he saw someone he wanted to beat, he got so excited I worried about him,” Dick said. “I told him to take it easy or he would tip over the chair.” As it turned out, Team Hoyt was unstoppable.  Rick and his dad got together every weekend, even after Rich graduated from Boston University. Over the next 41 years, Team Hoyt competed in some 1,130 races over the past 41 years, including 72 marathons and 257 triathlons.

Besides the obvious barriers, there were social barriers as well. As outlandish as it may seem today, in 1980, race officials at the renowned 26.2-mile Boston Marathon set up artificial barriers to keep them from competing. The race officials decided that the father and son team had to qualify for the race according to the son’s age (20) and not his father’s (42).  So, although the entry standard for a middle-aged man was 3 hours and 10 minutes (averaging seven minutes and 15 seconds per mile), Team Hoyt had to qualify at Rick’s youthful age. This required them to sustain a blistering pace of 2 hours and 50 minutes (six and a half minutes per mile). Let’s not forget that Dick had to run this pace pushing his 130-pound son in a stroller. Still, this barrier was not enough to keep Team Hoyt out. After four long years of trying, they finally qualified for the Boston Marathon in 1984,

Clearly, Dick had transformed himself into a world-class runner. People asked him to run on his own to see what he could do. However, his response remained the same over the years, “Rick and I have fun spending time together,” says Dick. “When I push him in that chair I go all out. I don’t know if I could go as fast by myself. Besides, I wouldn’t know what to do with my arms.”

True to form, when one fellow competitor asked Dick to compete in a triathlon, Dick responded, “Only if my son can do it with me.” Since a triathlon combines running, swimming, and bicycling this proposition sounded absurd. Nevertheless, Dick seriously contemplated doing it. When he asked his son if he was up for the challenge, Rick typed, “Dad, you don’t know how to swim.” Dick shrugged and said, “I can learn, can’t I.” Just like that, Team Hoyt set a goal to complete in a triathlon. Dick bought a retirement home right on Lake Hamilton to help with the training process. The first time Dick jumped in that lake, he reportedly “sank like a stone.” But Dick slowly improved – from doggy paddle to side stroke to freestyle.

Still, no one had ever done this before and Team Hoyt had to figure out the logistics.  They were true pioneers in racing. During the swim phase, Dick would tie a bungee cord around his waist and pull Rick in a specialized boat. During the bike phase, Rick would sit in a raised seat on the front of the bike. They would stick with their proven system during the running phase. In the transition phases — a time when most athletes are dead tired — Dick would physically carry Rick and place him in the next seat.

Just like in their first race long before, Team Hoyt finished next to last in their first triathlon. After the race, the now-popular athletes were invited to the podium to provide a few words. Dick ended his statement by saying, “We are now triathlon freaks.” The freaks competed in six more triathlons before the summer of 1985 ended. Each time they competed, their times improved.

In 1988, Team Hoyt turned their attention to the ultimate race, the Ironman World Championship in Kona, Hawaii. This race consists of a 2.4-mile swim, 112 miles on the bicycle and a full marathon run covering 26.2 miles. At first, their application was rejected. Race officials believed that the ocean swim would be too dangerous. However, when ABC Wide World of Sports agreed to cover the story, the pressure became too intense. Still, the officials would not budge on the time requirements. Each phase needed to be completed within certain time limits, including the overall time frame of 17 hours. A year later, the Hoyts met those race requirements, crossing the finish line in 14 hours, 24 minutes and four seconds. Both members of Team Hoyt were bestowed the title of “Ironman” and were doused with champagne by their wife and mom, Judy, and Rick’s two grown brothers. The Hoyts would return to compete in six more Ironman World Championships.

When the Hoyts began their racing career, they were oddities. Most competitors kept their distance. Few knew what to say to a non-verbal quadriplegic. As time progressed, the Hoyts became an inspiration. They became celebrities on the racing circuit. Complete strangers in the crowd cheered them on and called them by name. The Hoyts have received hundreds of thousands of emails and letters over the years, and they were invited to races all over the world. Most of the time their travel expenses were paid, and often they were provided an appearance fee.

If you ever take a tour of Boston, the tour guide will proudly showcase the bronze statue of Team Hoyt. This statue sits just steps away from the starting line of the Boston Marathon. It symbolizes the true spirit this team embodied as they competed in 32 consecutive Boston Marathons. The tagline at the base of the statue reads, “Yes You Can.”

Countless stories have documented this team’s struggles and successes. Many words have been used to describe this father-son duo: “Determination”, “perseverance”, “inspirational”, and “teamwork”. However, the word most often used to describe this team has been “love”.  Because this is really a love story about a father who wanted to provide his son with a slice of normality. The author of their biography, entitled “It’s Only a Mountain”, put it this way: “It was a labor of love; a love between a man and his son – a man who had patience equaled only by his son’s courage.”

Dick and Rick Hoyt are one of the 144 “Wednesday Role Models” featured in the Student Athlete Program. This program is designed to improve the character, leadership and sportsmanship of high school athletes. To learn more about this program and how you can implement it in your school: