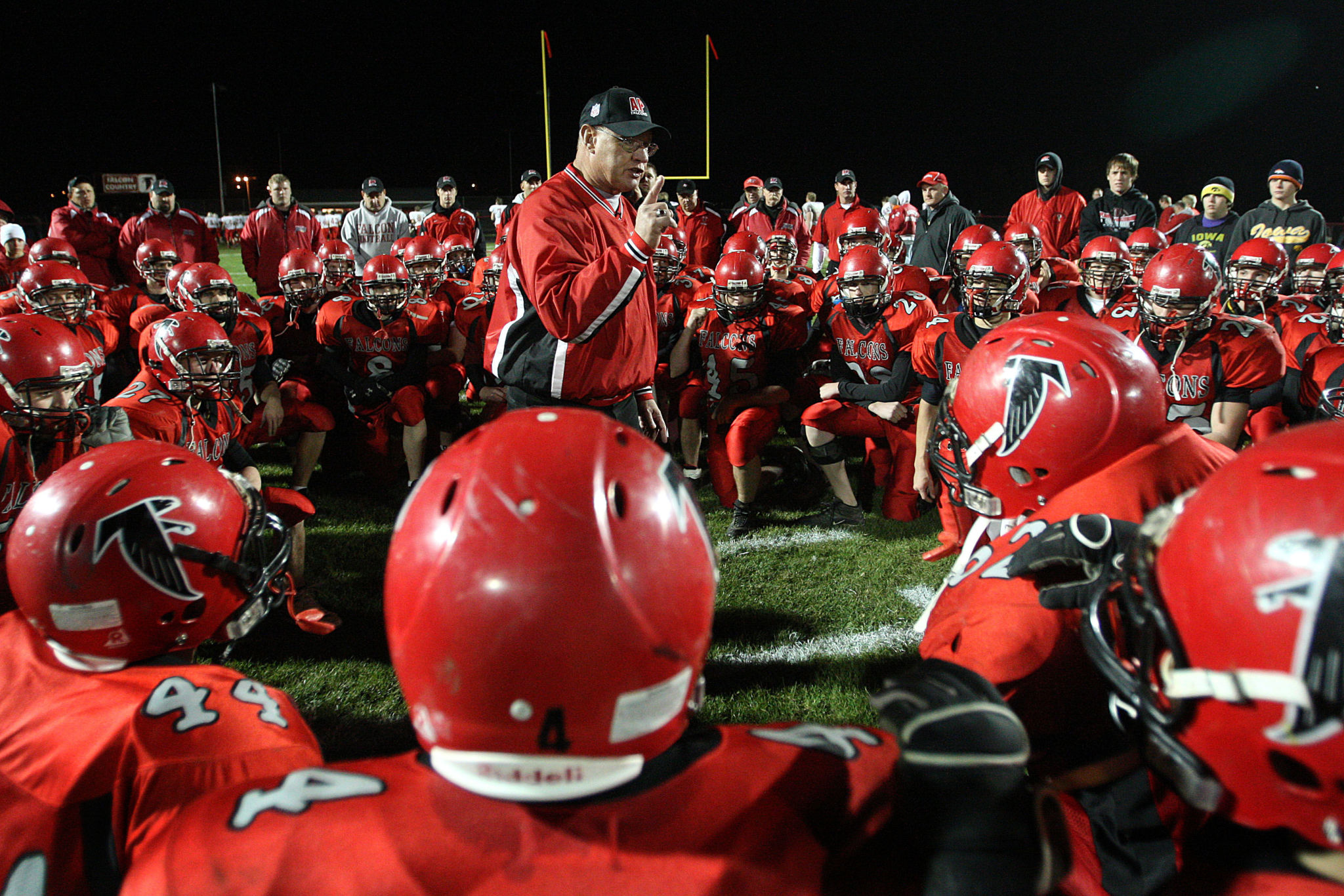 “If all I have taught you is how to block and tackle, then I have failed you as a coach.”

There are an estimated 35,100 high schools in the United States. Almost all of them have football coaches. Each year the NFL selects one coach to be the NFL High School Coach of the Year. In 2005, the NFL selected Ed Thomas from Aplington-Parkersburg High School in Iowa. Why would the NFL select a head coach from a small town in Iowa for this prestigious award? Because Coach Thomas was the perfect example of a quality coach. He led six teams to the state championship game, winning two of them. His teams were a regular fixture in the playoffs and only one of his teams from Aplington-Parkersburg had a losing record. His claim to fame is having four players from this small town go on to play in the NFL.

Truth be told, there are hundreds of coaches with more wins, more state championships and more players who went on to star in the NFL. Coach Thomas was not a football genius or an innovator of the game. What separated Coach Ed Thomas was not the X’s and O’s. It was neither the number of wins nor the number of championships. In a word, what separated Thomas was leadership. This man motivated players for 37 years, he inspired his community and, in the end, he changed the hearts of millions of people worldwide.

The game of football was very simple to Coach Thomas. He was predictable and organized. He taught the fundamentals of the game over and over again. And his teams simply outworked their competition. Coach Thomas knew that technique, discipline and attention to detail won games. He had a very thin playbook. He often joked that the offense only ran three plays and that the cadence was “Hey diddle diddle, we’re coming up the middle.” Nevertheless, his offense was imposing. After breaking the huddle, his players sprinted to the line of scrimmage and quickly snapped the ball. This often left defenses exhausted and disoriented.

Coach Thomas was a great teacher of the game, but he was a better teacher of life. He molded young people on and off the football field. He was a government teacher by title, but he spent most of his time on the playing field and in the classroom teaching character.

For Coach Thomas, life was even simpler than football. He lived by moral principles and strong beliefs. Every day he tried to lead a Christian life. He had many “old school” sayings that he preached, for example, “If you take care of the little things, the big things will take care of themselves,” “Never forget where you came from,” and “Always choose the right thing over the easy thing.” He cared deeply about people and developed meaningful relationships with all of his students. Former players moved back to Parkersburg when they began having children just so their sons could be coached by Ed Thomas. Everyone in Parkersburg viewed him as a friend and more than a few viewed him as their best friend.

One of those individuals who claimed Thomas as his best friend was his long-time assistant coach of 31 years, Al Kerns. Kerns relayed the following story to explain how Thomas made such an enormous impact in ordinary ways. The year was 1978. Before the season began, Thomas asked then first-year assistant Kerns to lead the team each practice with stretching and warm-up activities. Coach Kerns was fully prepared to lead these activities when the first day of practice began. However, Coach Thomas had other plans. “Coach Thomas did something I saw him do every day until the day he died,” said Kerns. “He blew his whistle and said, ‘Bring it in fellas,’ and he would talk about anything and everything other than football.” Every day Thomas would choose a different topic to inspire his players to be better individuals. These topics included treating women with respect, academic responsibilities, decision-making, being on time, giving back to the community… He stressed essential traits like integrity, loyalty, passion, and commitment. Kerns initially thought to himself, “You’re wasting a lot of time.” However, Kerns came to recognize over time how valuable these lessons were to the growth of the individuals and to their team. “I learned that when these young men improved their character they become better football players, they became more coachable, and they became better teammates.”

Improving character and developing leaders in this small Iowa town was what Ed Thomas perceived as his true calling in life. It was nothing fancy, but it was all that he ever wanted. He would have gladly ended his career in this ordinary way, but fate had other ideas. On a Sunday afternoon in May 2008, an F-5 tornado ripped through town. It left behind a devastating trail of death and destruction. Thomas’ home and his beloved school had stood squarely in the path of this destructive force — and both were demolished. Within a minute of the tornado passing over their house, Thomas and his wife, Jan, exited their basement and discovered that their house and, indeed, their entire neighborhood were gone. “It looked like a war zone,” Thomas said.

Individuals who had viewed this tragedy from afar were certain that the rebuilding of Parkersburg would take years. Ed Thomas had other ideas. Instead of wallowing in the fact that he lost his home, he did what he did best – he led.  To anyone and everyone who would listen, Thomas declared that his Falcons would play their first football game in their currently demolished stadium.

With tears in his eyes, he said, “Parkersburg needs something that lets them know that the storm did not beat us and will not define who we are.”

A few days later, he met with the football team. “Because of this tornado, you now have the opportunity to show the kind of character we’re made of,” Thomas said. “You have an opportunity to impact a lot of lives and help a lot of people in this town.” With these words, he inspired these boys, many of whom no longer had a home, to work tirelessly toward this goal. Without receiving a dime for their services, these boys routinely worked from sunrise to sunset. Thomas gave interviews frequently. He became the face of the recovery effort. He became the hope, the inspiration, the leader for others to follow. Every day community members of all ages showed up and asked one question, “What can we do to help?”

Exactly 105 days later, the Aplington-Parkersburg Falcons did play their first home football game as scheduled. Aaron Kampman, an A-P graduate and then Green Bay Packer, came back especially for this unlikely event. Driving down the streets, he said to his wife, “Man, you can just feel the hope in the air. You can sense a spirit of redemption here.” Before the game, Coach Thomas addressed his players. “Yes, fellas, we have already won in a lot of ways. We made a choice to get back up off the ground. We made the choice to rebuild,” he said. “And that’s something you are going to carry with you the rest of your life.” The boys won that night on the field too, 53-20. The boys won a lot that year. They finished the regular season undefeated before losing their 3rd playoff game to another state powerhouse, Emmetsburg. Sadly, this would be the final game that Thomas would ever coach.

The Thomas house had been rebuilt by late October. Brand new houses were sprouting up across town and businesses were reopened. The school was on schedule to re-open for the following school year. When the school year ended in 2009, everything was getting back to normal. Then, one day, the unthinkable happened.

On the morning of June 24, Coach Thomas unlocked the door to the “bus barn,” a temporary building where athletes came to lift weights during the off-season. Like most mornings, he helped volleyball players and football players alike reach their potential. Shortly before 8 a.m., Mark Becker, a former football player who now was mentally ill, walked straight up to Thomas and shot him in the head seven times. While Coach Thomas was laying on the ground, Becker — a paranoid schizophrenic — cursed this man of exemplary character and stomped on his chest. It was tragic, it was disturbing, and it was so utterly sad.

CNN began covering the shooting within minutes. The next week, ESPN put a picture of Ed Thomas on the cover with the caption, “Good Man Down.” Ed’s widow, Jan, and their two children, Todd and Aaron Thomas, understandably struggled to make sense of this senseless event.  Aaron spoke at the first press conference on behalf of the family. “Obviously with the shocking events today, nothing can prepare you for what our family and community are going through.” Aaron went on to speak about his father as a Christian man and a molder of character. He then thanked the community for all the support and prayers. Aaron then said something that stunned people across the country:

“We also want to make sure we express our concern and our compassion for the Becker family. We ask that people pray for them as well and that people take time to comfort and be with them through this as they are also going through a lot.”

Comforting the family of the man who killed his father seemed like an odd thing to do. However, to those who knew Ed Thomas and Parkersburg, Iowa, it did not. Mark Becker’s father and his two brothers also had played for Thomas. The youngest brother still played on the team. The families attended the same church. The Becker family loved and admired Ed Thomas. Aaron was just verbalizing what his father would have said. Jan Thomas even called Joan Becker to tell her that she was praying for her. In fact, the Thomas family allowed the Becker family time before the funeral so they could say their goodbyes privately. The guiding principles of Ed Thomas were being channeled through his family. Despite his grief, Aaron knew what his dad would have said to him: “You know what you need to do. Now do it. Do the right thing.”

For this gesture of compassion, ESPN provided Ed Thomas and his family with the Arthur Ashe Courage Award at the 2010 ESPY Award Show. After showing an emotional video, football great Brett Favre called the Thomas family to the stage. Sitting right behind them were Dave and Joan Becker. Almost everyone at the ESPYs wept as did those watching at home. The legacy of Ed Thomas lived on that night and inspired people toward forgiveness in their own hearts. This legacy also continues in the Ed Thomas Family Foundation and in the book entitled the Sacred Acre. I hope that this chapter also serves to inspire a new generation of young athletes who were unfamiliar with his story.

Ed Thomas is one of the 144 “Wednesday Role Models” featured in the Student Athlete Program. This program is designed to improve the character, leadership and sportsmanship of high school athletes. To learn more about this program and how you can implement it in your school: