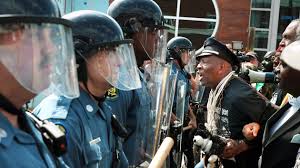 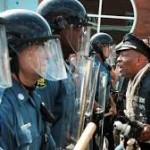 This is a follow up blog post to the events that have occurred in Ferguson, Missouri where Officer Darrin Wilson shot and killed Michael Brown.

The purpose of this blog is not to decide guilt or innocence. A grand jury has already ruled on this case just as has every person in this society. Instead of making such arguments, let’s take a step back and look at this from a sociological perspective. I don’t have the answers, I just have questions. Questions that maybe you can help me with…

Sociological Questions: My first question is, how did we get here? How did we get to the point in America in 2014 where rational people can watch the same event and come up with two completely different conclusions? Why is it that Fox News reports it one way and CNN reports the same story using a completely different narrative? Why, generally speaking, does a white person come to completely different conclusion than a black person? My answer is simple – a person’s life experiences and perceptions shape a person’ reality.  Regardless of the evidence or the way a grand jury ruled, it would not overcome a person’s biases, perceptions and thus his/her version of reality. Here are the two narratives that I hear:

Narrative #1: There is an unequal justice system in America where predominantly white politicians and law enforcement use power and force to keep black people and minorities in their place. Police officers unfairly use racial profiling and force to do their jobs. As such, Officer Darrin Wilson used prejudice eyes when he confronted Michael Brown in the street. Officer Wilson stereotyped Michael Brown as a thug… gangsta… hoodlum who was up to no good. Officer Wilson’s racist-colored glasses conditioned the way he interacted with Michael Brown and ultimately why he gunned him down with little or no provocation. There is still one eye-witness who claims Michael Brown had his arms raised in a surrender position when he was killed. This is another tragic story of an innocent young black man killed by a racist cop who over-reacted. This case represents the continuing inequities in America and fits the Civil Rights narrative.

Narrative #2: Michael Brown robbed a convenient store and man-handled the owner as he exited the building. Responding to the call, Officer Brown responded appropriately by cutting off their route with his car. After a brief exchange, Michael Brown reached into the car and wrestled Officer Wilson (which is a felony) for the gun and two shots were fired. Brown began to run away. Officer Wilson pulled his weapon and ordered Michael Brown to stop. Michael Brown turned and taunted the officer. He then rushed the officer from 25 feet away. Officer Wilson shot him several time in the arm and shoulder. Michael Brown stopped momentarily and then continued to charge the officer. With Michael Brown closing to within 10 feet, Officer Wilson delivered a fatal shot. This is not about black or white. It is not about an innocent man and a racist cop. This is about a 6 foot 6, 240 lb. man who was high (drugs found in his system),  had just robbed a store, strong-armed a clerk, assaulted an officer and then rushed the same officer who had a gun pointed at him. A grand jury of 12 peers listened to all of the forensic evidence and eye-witness accounts and found insufficient evidence to even put Officer Wilson on trail. This is a clear case of an officer using lethal force to protect his own life in the line of duty.

Keeping the sociological perspective in mind, how would you explain this entire case to an alien from another planet who had no idea about our customs, traditions, laws and ideological differences? Specifically:

A. How would you explain how people can hear the same story and come to such different conclusions?

B. Why a person’s skin color, previous experiences or political party would alter a person’s perceptions to the point that their viewpoint becomes reality?