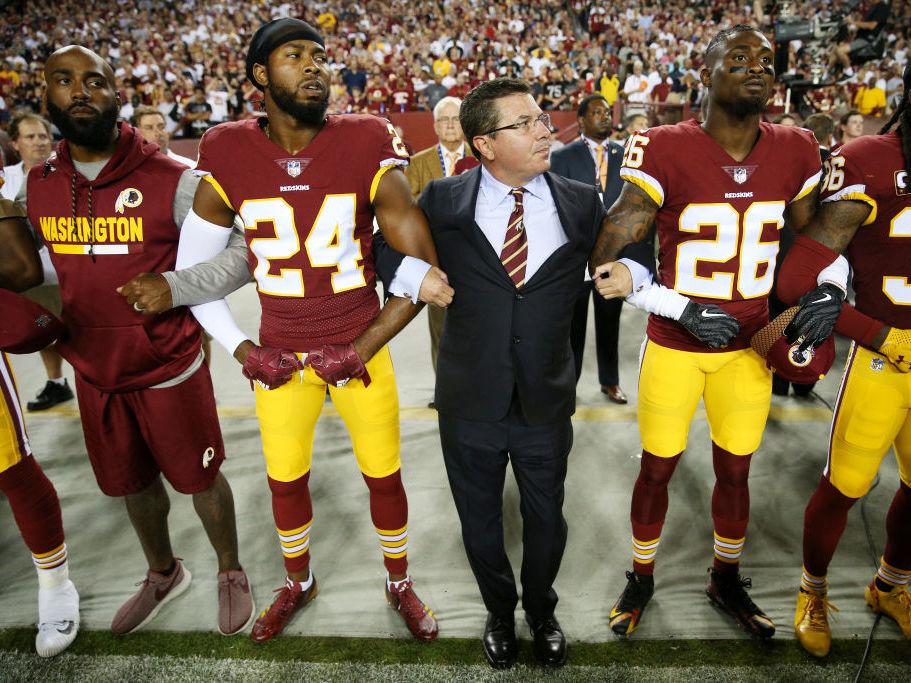 In 2016, Colin Kaepernick kneeled during the playing of the National Anthem. He did this to draw attention to what he perceived as an injustice in America. He believed that young black men were being unjustly killed by white police officers. A handful of players joined Kaepernick in his protest. This became a hot political issue. Throughout the 2016 season and in the beginning of the 2017 season a few players also decided to kneel.

On Friday, September 23, President Trump made the following statement to a crowd of supporters, “Wouldn’t you love to see one of these NFL owners, when somebody disrespects our flag, to say, ‘Get that son of a bitch off the field right now, out,’” Trump said. “‘He’s fired. He’s fired!’” The backlash was immediate this weekend. The NFL commissioner and a majority of team owners released statements condemning the president’s remarks. Approximately 400 football players (13%) decided to kneel during the national anthem over the weekend.

To help you understand this issue a little bit better, I will provide a pro and a con argument and then provide my perspective.

Pro: The playing of our national anthem before almost every sporting event (little league to the pros) is a short 3-minute exercise to commemorate what America represents.  It’s about democracy, freedom and the rights granted by the constitution. These ideals and principles are special and they shouldn’t be taken for granted. It’s also a time to honor those who have fought and sometimes died to defend the freedoms that we hold dearly. Regardless of your politics or who sits in the White House, we are all Americans. Everyone should stand and put their right hand over their hearts to celebrate the experiment that is America.

Con: Football players are American citizens. As such, they have First Amendment Rights. They have the freedom of speech and the freedom to protest whatever cause they choose. You don’t have to agree with it or like it. Millions of soldiers fought to ensure every American has these freedoms.

First Amendment Rights: Congress shall make no law respecting an establishment of religion, or  prohibiting the free exercise thereof; or abridging the freedom of speech, or of the press; or the right of the people peaceably to assemble, and to petition the Government for a redress of grievances.

We can express our opinions on any issue that we want at any time we want and the government cannot censor us. Silently taking a knee during the national anthem is covered. It doesn’t matter if you agree with the issue or not. That is why I take the controversial stance that the KKK has the right to protest and spew their hatred. It is also why I believe that a football player has the right to give voice to their issues.  No greater issue can supersede these points.

Joe’s Perspective #2 – Trump Was Inappropriate: President Trump should not use swear words in a public setting. It shows poor character. I also strongly believe that the president should not call American citizens names and suggest that they be fired simply for exercising their first amendment rights. In my opinion, he was inappropriate and divisive. I know this president does not apologize, but if I were his chief of staff, I would definitely recommend it here.

Joe’s Perspective #3 – Patriotism: Most people want to see professional athletes stand for the national anthem. I am one of them. My kids know what to do at sporting events and if they remain seated or talk during this time, they receive a yank on the arm from Dad. I don’t think it’s too much to ask the same from every American. If we can’t come together for that small amount of time to honor America, I think we are in trouble. I have many disagreements with the policies of our government, but I don’t choose to voice them during the national anthem.

Joe’s Perspective #4 – Backfire: As an American citizen, President Trump also has the right to free speech. He can express his opinions just like everyone else. However, his rhetoric actually galvanized this movement. He actually turned Kaepernick into a sympathetic figure. He turned this small issue involving a few players into a major national issue. Owners, coaches and players locked arms in defiance of the president, not necessarily in support of any one issue.

Joe’s Perspective #5 – Alejandro Villanueva: The other villain appears to be Mike Tomlin, head coach of the Pittsburgh Steelers. He wanted his team to have a united voice against the president’s words. The players decided to remain in the locker room during the national anthem. This, however, was a decision that Alejandro Villanueva, West Point graduate and Army Ranger, could not abide by. He walked on the field and stood with his hand over his heart.  The jersey of this offensive lineman is now the top-selling jersey in the NFL.

Joe’s Perspective #6 – Capitalism Will Work It Out: In the end, this is America. If you want to boycott the NFL because you disagree with the players, have at it. If companies want to pull advertisements, so be it. Likewise, if you want to buy your first ticket to an NFL game to show your support, now is the time.  It’s the beauty of capitalism – the market will decide on this issue.

Your Turn: Learn all the facts, listen to all the voices and take a deep breath. Using respectful language, write down your thoughts and feelings about this issue.