Hero in a Cowboy Hat

Hero in a Cowboy Hat 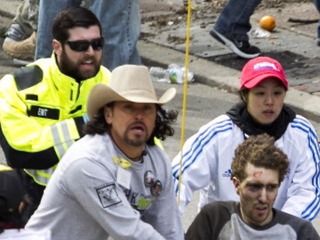 The bombings at the Boston Marathon captured the attention of all Americans last week – the innocent bystanders who were injured and killed, the manhunt for the terrorists, the killing of suspect #1 and the capture of suspect #2. In the weeks and months ahead, we will turn our focus toward the motive and the story behind this purposeful attack.

First Responders: I am always looking for stories related to character and leadership, and I didn’t have to look very far in this story. Immediately after the bombs went off, most ran away and a few ran toward… toward chaos, toward the victims and toward the unknown. It took all of 14 seconds for first responders to reach the wounded. And, while many of those first responders were being paid for their services, several of the first responders were ordinary citizens who felt a need to help. One of those individuals is named Carlos Arrendondo – the man in the cowboy hat.

Background on Carlos: Each year, Carlos hands out American flags at the finish line to runners who are running to honor fallen soldiers, including his son, Alexander. After being told that his son was killed in Iraq (2004), he locked himself inside a Marine Corp van and set the van on fire with the intent of killing himself. He was rescued by Marines. In 2011, his only other son, Brian committed suicide, never fully getting over the loss of his brother. Carlos knows pain, immense pain. And, yet, he’s still here, helping others.

Immediate Action: Carlos was standing near the finish line when the bombs exploded. He jumped two fences and sprinted towards the victims. He immediately found a man with both legs blown off and he used articles of clothing to tie tourniquets. Carlos calmed the victim down by speaking to him calmly, “Stay with me… You are going to be alright.” He located a wheelchair and raced him down the street to an ambulance, carrying this man’s femoral artery in his hands. Carlos did not learn the name or the fate of the man he helped for nearly 24 hours.

Jeff Bauman: The victim’s name is Jeff Bauman and he is alive today because of the heroic acts of Carlos Arrendondo. BTW – when Jeff Bauman woke up in the hospital, he immediately identified one of the bombers, helping the authorities solve this case quickly. Isn’t that something?

http://www.youtube.com/watch?v=eGCtYM0zTaA (what Jeff did when he woke up)

Your Turn:
1) What separates those who run away from tragedy and those who run to help victims affected by such tragedy? What are the characteristics it takes to be in the latter group?
2) What do you think you would have done in that situation? Is this something you can prepare yourself for in the future? What do you think the authorities want you to do in such situations?