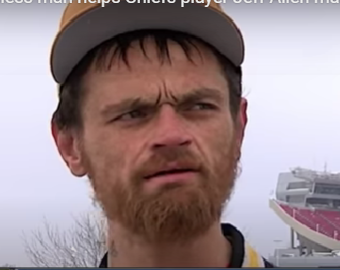 It was Saturday, January 12. Kansas City, Kansas. The temperature was 30 degrees and it was snowing hard. A man named Dave Cochran was driving down Interstate 40. He pulled his Suburban over to the side of the road to help someone stranded in the ditch. After successfully helping this family out of the ditch, Cochran saw another car in the same ditch. This time it was a man. The man was Kansas City Chiefs, Offensive Lineman, Jeff Allen. Allen was on his way to play in the AFC Divisional Playoff game against the Indianapolis Colts. Trouble was, Allen was getting there nowhere fast.

Cochran told his girlfriend, also in his Surburban, “We have to help him. After pushing him out, Jeff Allen thanked the good Samaritan and told him that he was a member of the Kansas City Chiefs. Allen did make it to the game on time. His team won the game and will play in the AFC Championship Game next week against the New England Patriots.

Turns out the man, Dave Cochran, is a homeless man. Cochran currently lives in that black Suburban with his girlfriend. Through the power of social media, someone tracked down Cochran and gave him the news. His response was classic. “I saw the message this morning, and I am not going to fake with you, call me soft if you want to homeboys, I started bawlin’ to know he is a man of his word and he reached out to contact me.”

Joe’s Perspective: Of course, the moral of the story is to just do the right thing at the right time. Cochran didn’t help him because he was a football player or because he wanted free tickets. He helped a fellow man in a time of need. As Cochran said to the local news channel, “I didn’t know he was a Chiefs player. I looked at him as a normal person and hoped he would do the same for me like I did for him.”

Your Turn: After reading this article, what is your reaction?