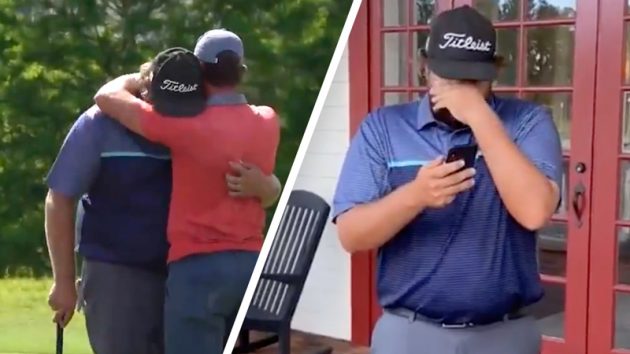 After one year of playing collegiate golf at the University of Central Florida, Michael Visacki dropped out to try his hand at professional golf. For the past 7 years, he has played on several “mini-tours”. It’s kind of like playing in the minor leagues for baseball. Truth be told, he doesn’t make a lot of money, so he still lives with his parents.

On the Monday before each tournament, many of these mini-tour guys play in what’s referred to as a Monday Qualifier. From this round, 1 or 2 guys qualify for the upcoming PGA tournament. In this case, Visacki sank a 20 foot putt to become that person who qualified to play in the Valspar Open, which took place at Innisbrook Golf Course, just a few miles from where he grew up.

After he made the putt, he gave his caddy a big bear hug and began crying. It meant that much to him. He then walked to the clubhouse and called his dad. “I made it. I made it, Dad.” He was so emotional. He then called his mom, who had to pull her car over to the side of the road because she was crying so hard. Visacki told his mother, “I knew if I kept knocking on the door it would happen. I finally did it. No words can say what I’m feeling right now.”

In an interview after making the cut, Visacki commented on his parents: “They have given everything for me. They sacrificed everything for me so that I could play professional golf. They knew I was able to do it and they were always there for me. My dad cried, my mom cried and I cried.  It was just a really special moment.” He knew how fortunate he was to have parents who could and did financially support him as he tried to fulfil his dreams.

Joe’s Perspective: We all hear the big stories of Tiger and Phil, Justin and Rory who hoist the big trophy on Sunday, but we don’t always hear about the little guys who struggle just to qualify on Monday. Visacki cried on Monday the way Bubba Watson cried after he won the Masters a few short years ago. Qualifying was a big step… a confidence booster, if you will. Truth be told, he didn’t even make the cut on Friday, so he made zero money. Visacki didn’t care. He was able to tee it up with pros that he saw on TV and it meant the world to him.

It’s funny, I wrote down this quote earlier today. “The victory is not whether we hold the gold cup, it’s whether we give our hearts to it.” I think this quote captures this story. Millions of high school athletes don’t have the talent to play professional sports, but who cares. Sport is about competition and giving everything your body can produce to do your very best. I guess this is why I love this story. Visacki gave everything he had to qualify, and that is something to admire. As Visacki said, “So many people give up on their dreams, probably because they can’t afford it.” As for me, I will be rooting for this feel-good story. I hope you will be too.

Your Turn: “So many people give up on their dreams.” What is your dream in sports or life?