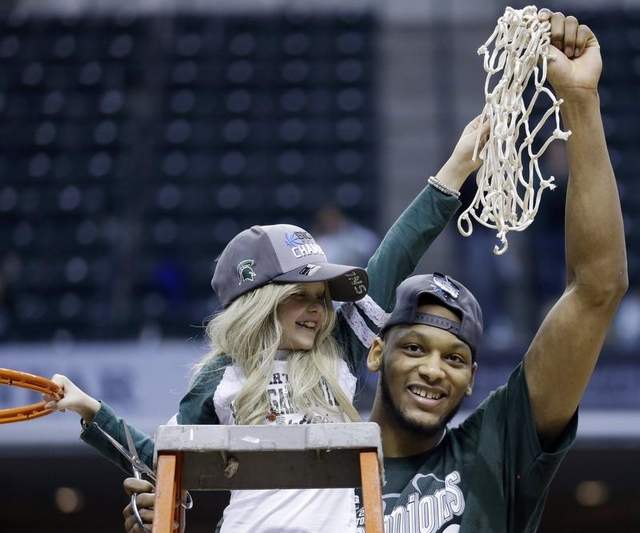 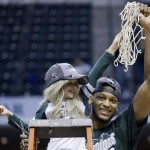 If you are a college basketball fan, you probably know two things this morning 1) UConn won the national championship on Monday night and 2) little 8-year old Lacey Hollsworth died yesterday after battling cancer.  America got to know this emotional story as Lacey played such a pivotal role in Michigan State University’s late season run and because of her special relationship with MSU’s big man, Adreian Payne. Adreian carried her out on Senior Night, had her cut down the nets after the Big 10 Championship and touched the ball for good luck before Adreian slammed the ball at the NCAA Final Four slam dunk contest.

Back Story: In 2011, the men’s basketball team went to a local hospital on a semi-routine visit to cheer up kids struggling with different diseases. One of those patients was Lacey. She had neuroblastoma, a rare and aggressive form of cancer that attacks the nerves. At the end of the visit, she asked Adreian to stick around.  For the better part of 2.5 years, they developed a close sibling-like relationship. He referred to her as “sis” and she referred to him as “Superman.” He would visit her at her house and at the hospital and she would visit him on campus. The would text each other nearly everyday.

Author’s Perspective #1 – What Adreian Provided: Lacey only lived 8 years, and as the father of four young girls, her death makes me weep.  And yet, I am comforted knowing that an almost complete stranger put a smile on her face as she valiantly fought cancer. Payne allowed her to experience something special before she died. I bet if you asked Lacey, she would have told you that she lived a fulfilling life.

Author’s Perspective #2 – What Lacey Provided: Lacey said she initially picked Adreian because of his smile. She had no idea that Adreian’s mother died when he was young and that his grandmother, who raised him, recently died. In a strange irony, Lacey gave Payne what he needed too – a sense of family. He needed someone to inspire him, someone to make him a better person and someone to accompany him on senior night.

Author’s Perspective #3 – What More Can We do: There are hundreds of thousands of stories like Lacey in the world. The sad truth is that kids struggle with and die from awful diseases on a daily basis.  And, most of them don’t have the kind of inspirational relationships with athletes who are their heroes. My wonder is what I, you or all us can do to help those kids who are still alive and struggling.  You don’t need to be an athlete  in order to be a hero!

(1) When reading about this and watching the video, how did you feel? Why?

(2) Upon reflecting upon this story, do you think you could do anything to inspire or put a smile on a child’s face who is battling with such painful diseases?