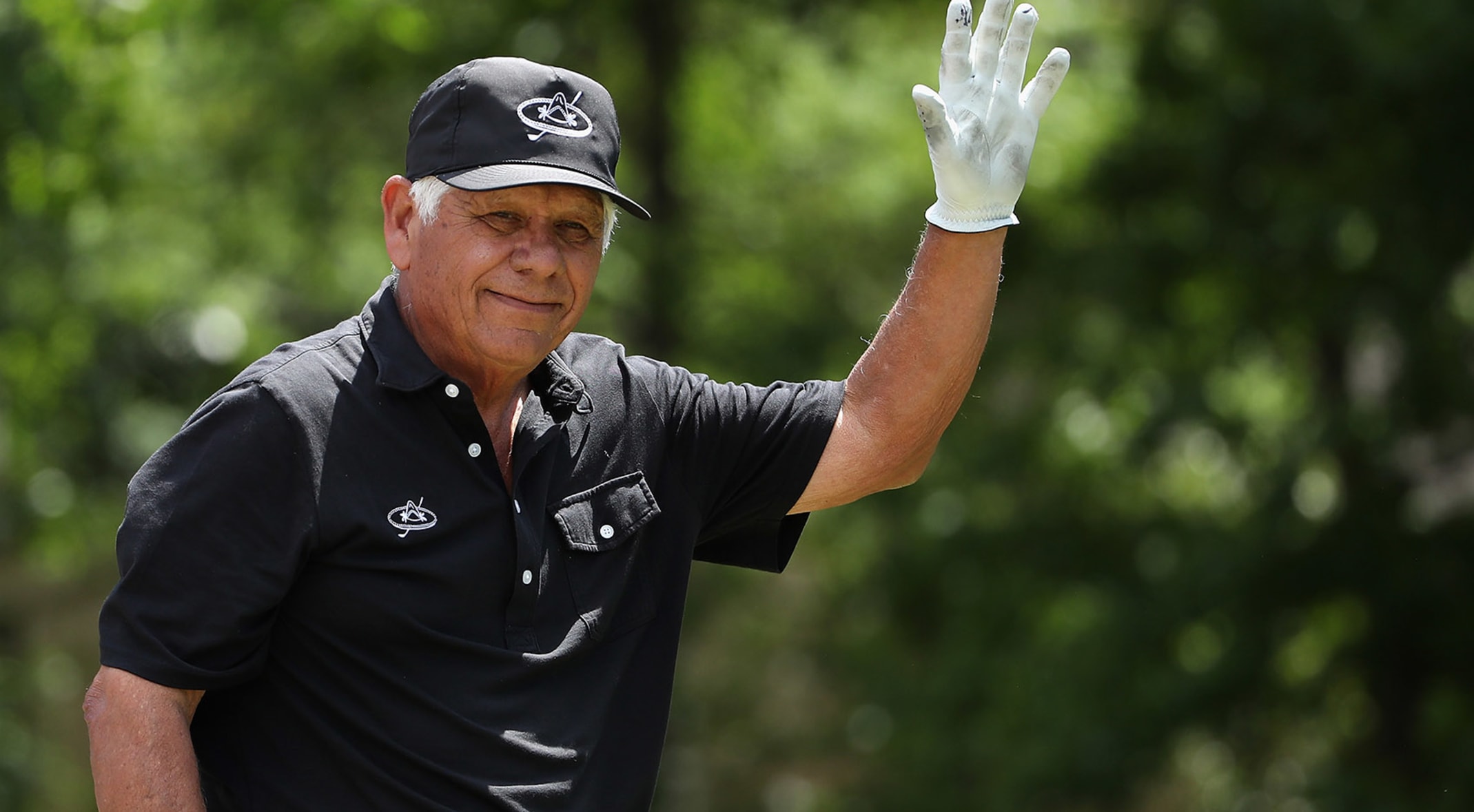 “I think you have to be a gambler. You have to take a gamble when the occasion calls for it. You ever get a chance at winning, forget 2nd place, forget 3rd place. I don’t care if you make a 9 on the last hole, you gotta go for it.”

It never came easy for Lee Trevino. He was born in 1939 in a dirt-floor shack that had no electricity or running water. He did not know his father, and was raised by his mother and grandfather. His grandfather was a green card immigrant from Mexico who dug graves for a living. Life was difficult for this family living in North Dallas, Texas. They hunted and fished, not for sport or fun, but because they needed to eat. At age 3, Lee began picking cotton. At the age of 8, he began working as a caddy at the Dallas Athletic Club. After completing the 7th grade, Lee quit school to become a full-time caddy. “I never had a childhood,” Lee recollected. “I’ve worked ever since I can remember.”

As a caddy, Lee paid attention and learned to play golf. However, most of his golf education took place behind the caddy shack where the caddies had built a 3-hole course in the dirt. The caddies loved to bet and they used peer pressure to persuade Lee to bet his daily wages after work. Before long, Lee learned that he could “hustle” more money betting on golf than he could by carrying clubs. “That’s where I learned my killer instinct.”

At the age of 17, Lee seemingly left the game of golf behind when he joined the Marines and became a machine gunner. The marines provided order and discipline to Lee’s life. After two years, having no other prospects, he re-enlisted. This time, luck was on his side. Due to a clerical mistake, Lee was assigned to “Special Services” and played for the 3rd Division Marine Golf Team. So, for two years, Lee played golf seven days a week. Looking back, Lee called this the luckiest break of his life: “I probably wouldn’t have pursued the game. I wouldn’t have had the chance to. I would have ended up in Vietnam. I probably would be dead or in prison.”

After being honorably discharged at 21 years of age, Lee found himself back on a golf course in Dallas. He was employed to do much of the grunt work on a golf course — the driving range, grounds maintenance, and taking care of the golf carts. The tradeoff for this physically demanding job was the freedom to play as much golf as he wanted. Subsequently, Lee gained quite a reputation as a total stud on the course. Everyone accuses Lee of being a hustler, but the truth was that big-time gamblers with an ego sought him out. It was reminiscent of the Old West when gunslingers challenged the fastest guns to a gunfight at high noon. Lee almost always came out on the winning side and took home the money. Unfortunately, Lee also liked to drink and, four years later, he was just as broke as when he started.

In the meantime, through doggedly working and playing so much golf, Lee had accumulated the credentials to earn his PGA Card. However, his boss openly told Lee that he had not “matured enough” and refused to endorse him. In response, Lee quit and moved away to El Paso. But nobody there would endorse him either. “I wasn’t smart enough to figure out what they were doing,” Lee stated years later. “It was because I was Mexican American.” Finally, after a letter-writing campaign failed, a respected PGA member named Bill Eschenbrenner went to a PGA meeting and told those stodgy guys, “You can take my PGA card if Lee doesn’t make a great PGA member.” That did it. At the age of 26, Lee Trevino became a PGA Professional.

Lee still had to qualify to join the PGA Tour, so he began to work harder than ever on his golf game. “You want to be a good golfer, do what Trevino did,” said life-long friend Jesse Holman, “Every day, including Saturday and Sunday, he would hit 1,000 golf balls. Then, he’d go out and putt for an hour, and then he’d go out and play 18 holes.” Lee qualified for the 1966 US Open and made the cut. The next year he not only qualified, he finished 5th. In 1968, Lee once again qualified for the US Open, and this unknown Mexican American from the wrong side of the tracks won this major tournament. Not only did he take down the entire field of professional golfers, but he also beat Jack Nicklaus, the greatest golfer in the world, by four strokes. As he walked up the 18th fairway, he put his arm around a well-known golf administrator and smiled: “Whether you like it or not, you got a Mexican as the US Open Champion.”

It is hard to describe the shock waves this win created in the golf world. Commentator Peter Alliss described it this way: “Golf really is a game where the rules were laid down 400 years ago — how to behave, what to do and what not to do — and along came this man who did things his way.” Lee was unconventional in every way imaginable. In addition to his dark skin, a background of poverty, and his unusual path to the pros, he wore his emotions on his sleeve. He interacted with the gallery. He laughed and told jokes. He openly made side bets. He sang as he walked up the fairway. He also talked all the time. Jack Nicklaus famously said, “You don’t have to talk with Lee. He’s going to do all the talking.” In short, Lee did things that “golfers don’t do.” He was a man of the people and the people loved him.

Of course, Lee really could play. He was known for his artistry and his touch. He could work the ball from left to right or right to left. He hit it low or high, depending on what the conditions required. “A lot of guys would hit the shot on Tuesday in a practice round, but wouldn’t play it on a Sunday when it meant something,” admired Steve Melnyk. “Lee was totally fearless when he came to hitting shots that fit the occasion.” He also had a tremendous ability to perform under pressure. After Lee won his second US Open in a playoff with Nicklaus, Lee was asked how he stayed so composed in big moments. Lee’s answer put things in proper perspective: “Playing in big tournaments is not a lot of pressure. When you’re standing there with an 8-foot putt to win $90,000, you know if you miss it, you’re going to win $47,000. Real pressure is playing for ten dollars when you don’t have a dime in your pocket.”

Lee bought a station wagon and drove to each tournament. He stayed in cheap motels and ate at local diners. He preferred this to staying at the nice hotels with their pretentious dress codes. This recipe worked for Lee. He won 29 PGA Tour events, including six major championships. Not bad for a guy who didn’t receive his PGA card until he was 26 and didn’t win on the tour until he was 28. Unfortunately, his abbreviated career hit a bit of a speed bump when he was struck by lightning while playing golf at the Western Open in 1975. It went right through his body and left behind four burn marks. Because the electrical shock destroyed his muscle tone, Lee had to endure months of rehab. When he recovered, he went on to compete and win again. He also went on to win 29 additional victories on the PGA Senior Tour after the age of 50. To commemorate his remarkable career, Lee was inducted into the World Golf Hall of Fame.

Lee paid a high price for his commitment to the game of golf, which led to certain regrets. While he was relentlessly working on his professional career, his marriages fell apart and he rarely saw his six children. “If I could do anything over… I would have taken more quality time with them for sure.” However, in retirement Lee has had plenty of opportunities to make things right. In fact, in a full-circle moment, Lee and his wife settled into a modest home approximately three miles from where he was born. Lee is also wiser and at peace with the world. Sam Blair, the author of Lee’s biographer noted his transformation. “He’s learned along the way, a lot about himself, about the world and about what it takes to make a happy life, not only on the golf course, but everywhere in life.”

Tom Weiskopf, a PGA contemporary of Lee, astutely noted: “He’s the American dream. He proves, very simply, that if you keep trying, take the good with the bad, something good is going to come back to you.” The journey wasn’t easy. Lee’s life began in challenging circumstances with the deck stacked against him. Throughout his life, he demonstrated tremendous grit and determination to become one of the best golfers to ever have lived. He was a street fighter and a scrapper. As such, golf writer Ron Sirak once said, “He took down some of the kings of the game at the peaks of their power and never backed down one inch.” At the same time, his outgoing, fun-loving personality endeared himself to millions of fans and he forever changed the complexion of the game.

Lee Trevino is one of the 144 “Wednesday Role Models” featured in the Student Athlete Program. This program is designed to improve the character, leadership and sportsmanship of high school athletes. To learn more about this program and how you can implement it in your school: