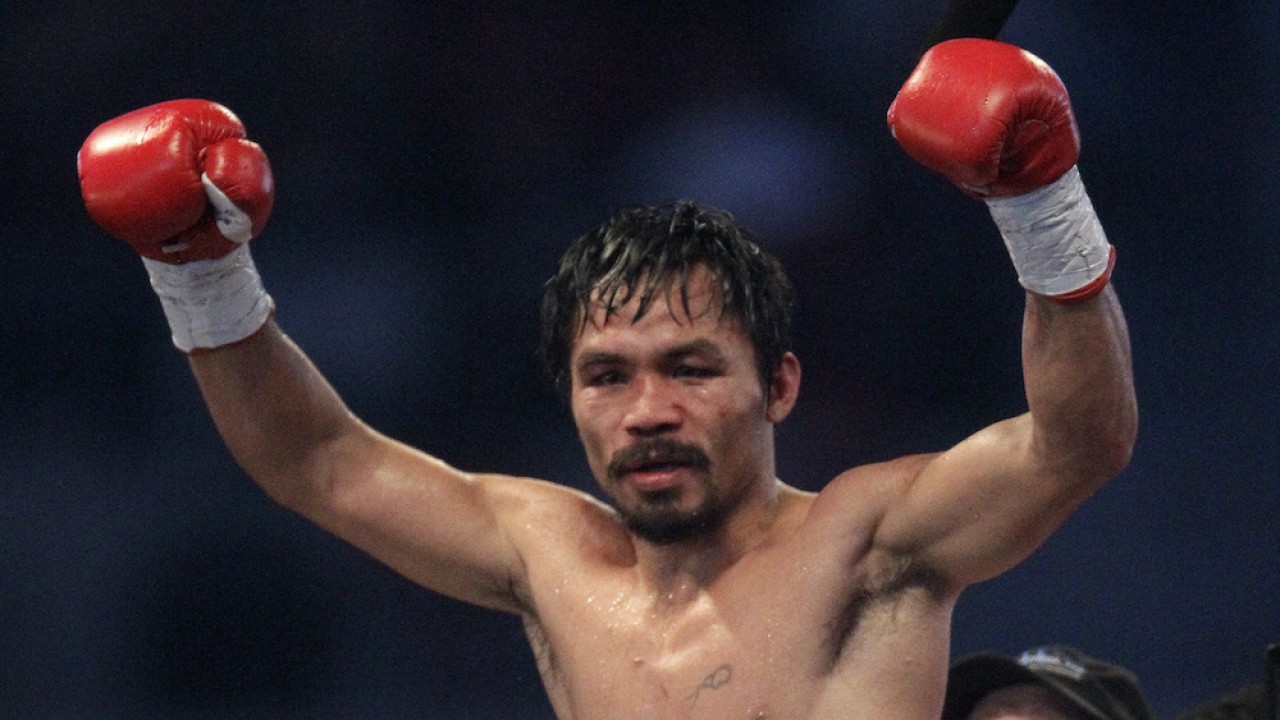 “I have achieved my dreams in boxing. What I want to achieve more is public service. I want to be a champion there.”

Manny Pacquiao was born in the war-torn nation of the Philippines in 1978. For many years, a civil war had waged between the “Resistance” and the Philippine army. The dictator, Ferdinand Marcos, also had imposed martial law on the country and this led to further chaos and rebellion. As a little boy, Manny had a front row seat to this war as it raged outside his tiny village and he witnessed the carnage of dead bodies left behind. In addition to this nightmare environment, Manny’s father and mother separated, leaving the family destitute. “All I remember is that we were very poor. Our home was a small nipa hut. The roof and walls were made of leaves from a coconut tree. We had nothing.” Sometimes Manny would go days without eating. When he finished 6th grade, he decided to drop out of school to help provide for his family. He and his five siblings would spend their days looking for work and often helped their mother sell cigarettes in the streets.

When Manny turned 12, he began boxing to earn money for his family. For each win, he earned 100 pesos (about $2). He quickly learned that he had the potential to be a decent fighter. So, one year later, he stowed away on a boat to Manilla in search of bigger fights and larger paydays. Upon his arrival, he wrote a letter home to his mother that contained these words: “I’m sorry mom, but I’m earning a living here so we can get out of poverty. My perseverance isn’t just for me, this is for all of us.” He initially slept on the streets or in the boxing ring. However, his decision on his family’s behalf ultimately paid off: His amateur boxing career ended with 60 wins and only 4 losses.

Manny’s next task was to turn professional. That is where the big money would be. So, at the young age of 16, Manny applied for his boxing license. However, the rules clearly stated that to become a professional boxer, an athlete had to be 18. Therefore, Manny lied on his application. The fighter also had to weigh a minimum of 105 pounds and Manny only weighed 98. Therefore, Manny put rocks in his pocket during the weigh-in. The end result of this process was a professional boxing license for Manny. And, despite giving up pounds and inches to his opponents, Manny managed to win 32 of his first 34 professional fights.

At the age of 22, Manny understood that he was good, but not great. If he were going to send more money home to his family, he needed to improve. So Manny decided to go to America to find a top-level trainer. The last stop on his tour ended in Los Angeles at the Wild Card Boxing Club. After one round of sparring, trainer Freddie Roach knew he had found the real deal. As fate would have it, Manny’s big break would occur a few days after signing with his new club. A promising fighter suddenly canceled a fight with the super bantam weight champion of the world. The promoters needed a replacement, and they went right down the list of top-five contenders. But each of them declined; They needed more time to train. But the sixth-ranked contender — Manny Pacquiao — enthusiastically agreed to the fight. Ten days later, as a 44-to-1 underdog, he annihilated the champion with a technical knockout.

Sending substantial money home to his family suddenly was no longer a problem. Manny kept winning and kept moving up in weight class. He defeated 22 world champions over the course of his career and won titles from 105 pounds to 154 pounds. In the Guinness Book of World Records, Manny is credited as the only person to hold world titles in eight different weight divisions. Sometimes those fighters outweighed him by as much as 20 pounds and were considerably taller. None of that mattered to Manny. He was quicker, smarter, and he hit harder. He did not win every bout but, in 2021, at the age of 42, he ultimately retired with a 62-8-2 record. At that time, Manny was the only boxer to hold world titles in four different decades — the 1990s, 2000s, 2010s, and 2020s. In the process of all of that, he earned millions of dollars to take care of himself and his family, and was reportedly the second highest paid athlete in the world in 2015.

As you are reading this, Manny has become the most recognizable person in his home country of the Philippines. One American reporter said, “I’ve followed Manny Pacquiao in the Philippines. It’s like following Elvis Presley and JFK in one person.” It was common to see a million people line the parades that were given in his honor after big wins. When he fought, virtually everyone stopped whatever they were doing to watch. Businesses put up “closed” signs and the warring sides in his country called cease-fires. The police reported zero crime during Pacquiao fights because even the criminals were busy watching TV. Fight promoter Bob Arum once said, “In the Philippines, there is nobody not watching Manny fight. And there must be blind Filipinos, and they’re listening.”

But this story is not about earning money and fame; It is about caring. Make no mistake about it, Manny had become a world-wide success. He had received countless awards from prestigious organizations over the duration of his career.  However, after making it to the top and earning millions of dollars, he did not move to Hollywood or Las Vegas to live the easy life. Instead, at the height of his professional boxing career,  he returned to the Philippines and lived among the people he cared so much about. Although still boxing, he set about serving his countrymen by also becoming a politician: “My dream is to focus as a politician. I have a responsibility to serve people, to give back what God gave to me.” To those ends, he was elected to the Philippine House of Representatives in 2010. He served in that position for six years before he was elected as a senator in 2016. Finally, five years later, in 2021, Senator Pacquiao officially announced his retirement from boxing: “I have achieved my dreams in boxing. What I want to achieve more is public service. I want to be a champion there.” He then announced his candidacy for President of the Republic of the Philippines.

Manny’s goals as a politician have always been bold and noble. Since before he was born, his country had only known war, corruption, and poverty. His goal as President is to unite his people and bring the country to greatness. He wants to end the long-standing war. He wants to end the corruption of politicians who have been taking advantage of the impoverished people. He wants to bring freedom, capitalism, and prosperity to the Philippine nation.

In May 2022, 94 million people in the Philippines will have the opportunity to elect a new president. The early polls say Manny is favored to win. A Filipino citizen recently said: “He inspires the young people because he came from nothing. He didn’t have a name. Then he became one of the biggest men here in our country, in the world.” Of course, no one knows if he will be elected and, if elected, what kind of president he will make. However, his words tell us that he is doing this for the right reasons. Each morning, Manny continues to ask himself “What difference can I make?” He clearly cares about his citizens and his country, and he wants to serve them to the best of his ability. Manny’s quest for the presidency is bigger than boxing. It’s bigger than being a prize fighter. His journey now is about fighting and winning for his people. Every time he goes out there, he is winning for them.

Manny is one of the 144 “Wednesday Role Models” featured in the Student Athlete Program. This program is designed to improve the character, leadership and sportsmanship of high school athletes. To learn more about this program and how you can implement it in your school: