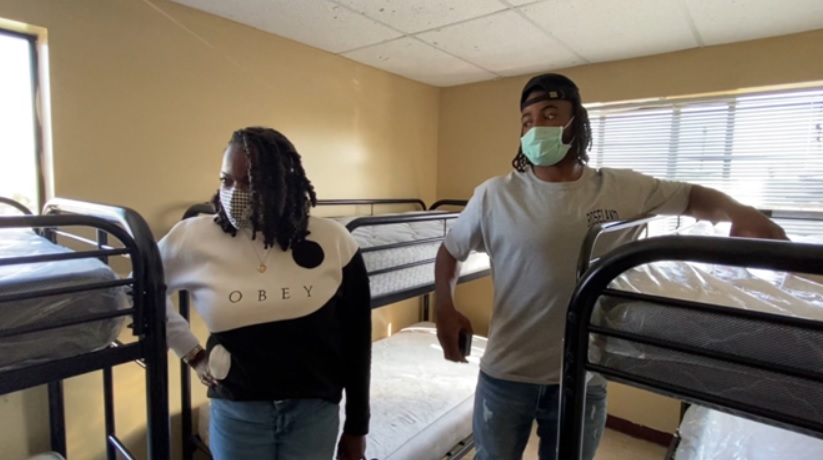 “I just think about life, the business I’m in, how fake people are, how crazy society is, and then I think about how far I came, it’s really crazy. I’m so humbled to be here, cuz it was really really tough livin’ – to be in this position is just crazy.”

Each year, 259 players get drafted in the NFL Draft. The top 29 projected players are invited to appear live on the televised event. The rest hold elaborate draft parties in their respective hometowns. These players invite family, friends, former teammates, and coaches to share in the life-changing moment. When the phone rings at some point in the night, a head coach from an NFL team welcomes the player as the newest member of the team. The room erupts with excitement, which is followed by hugs, smiles, and tears. This type of celebration is repeated player after player, year after year.

In 2021, Najee Harris was one of the 29 players invited to attend the draft. He was a highly-touted running back from the University of Alabama. Najee thanked the NFL for their invitation to attend, but politely declined: Najee would feel like a sellout if he did not celebrate this epic moment with the people who mattered most in his life. He reflected, “I felt the whole Bay Area Community helped me get where I am today. I wanted to do something for the kids and let them know that I was once in your position.”

Instead, Najee prepared for the draft in a way that probably has never been done before. He and his mother visited a homeless shelter in Richmond, California, called Greater Richmond Interfaith Program (GRIP). This wasn’t just any homeless shelter; this was where his family frequently called home while growing up. “There were seven of us at the time. We were lucky enough to have open doors for us to stay there when we needed a helping hand,” Najee told reporters on draft day. “They got us an opportunity to get back on our feet. Now, it’s my job to give back.”

Najee walked the halls of the homeless shelter and visited the room that he had stayed in so many nights. It was emotional. He spent time with the families who presently resided there, especially the kids. Kathleen Sullivan, the executive director of GRIP said, “A lot of folks have gone on to be successful, but to come back and say ‘I want to help’ has not happened in my time. Just his presence, just his story speaks so much encouragement to anybody going through anything. He is hope like no one has ever seen.”

Najee then invited these homeless families to attend his draft party at a local restaurant. And, sitting amongst his people, the call came in on his cell phone from Mike Tomlin, the head coach of the Pittsburgh Steelers. “You ready to do this young man?” asked Coach Tomlin.  Najee’s response: “Yes, Sir, thank you for having me. I appreciate everything.” It was the realization of a dream come true. And yet, most people who viewed the draft selection on TV had no idea from whence Najee had come and what he had to overcome to get to this point.

Most assuredly, Najee’s earliest memories are not positive. He summed up his childhood by saying that his living situation was “bad.” He remembers lots of arguments and his father hitting his mother. When his mother finally left Najee’s father, she took her five children with her. They were poor and got evicted often. By the time Najee reached high school, he had lived in 12 different cities in Washington and California. Najee wore the same clothes every day because they were all he had. He sometimes slept in cars and sometimes slept in homeless shelters. His main objective was to get through the day with food in his belly, which didn’t always happen.

Najee’s early school years were equally as rough. Najee acknowledges that he suffered from mental health issues. He was often angry and confused. He describes his younger self as a “bad ass kid.” He got in lots of fights, destroyed classrooms, and flipped over tables. The police were called to intervene many times. His mother recalled, “No one could handle him.”

At the end of 8th grade, the family moved to a rough section of Antioch, California. Within a week of their arrival, a person was murdered on their street. There were gang wars, SWAT busts, drug deals, and prostitution rings. It was a dangerous place to live. Negative outcomes were the norm, not the exception for most of the kids in the neighborhood.

It was at this point that football got Najee back on the right track. It offered him another option and Najee fell in love with the sport. He told his coaches that he wanted to become “the best.” His coach, Mori Suesue, responded: “Before you ask me that, know what that means. It means ugliness and tough love; late nights and early mornings.” Accordingly, Najee’s coaches would open up the weight room for him in the mornings before school and on Saturdays. “That’s when I started believing in myself,” said Najee. “I felt confident in myself.”

Najee dedicated himself to football and his investments paid off. He rushed for 2,363 yards as a sophomore, 2,744 yards as a junior, and 2,776 yards in his senior year. Having accomplished that, Najee was rated the top recruit in the country coming out of high school. Accordingly, scholarship offers came in from all over the country. It was a chaotic process and his mother still possesses two large garbage bags full of offers. However, when Alabama asked him if he wanted to carry the ball for the Crimson Tide, Najee immediately said “Yes.”

It should be made clear that playing at Alabama was not easy. Being from the West Coast, Najee had trouble fitting in with the southern culture. Also, in his first two years he had to sit behind two other dominant running backs. That was difficult for Najee and he contemplated transferring to another college. Even so, he was always ready for whatever role Alabama wanted him to play. And, in the end, Najee graduated in four years, won two national championships, and broke records for most rushing yards and touchdowns in an Alabama uniform.

In spite of all the early challenges followed by unbelievable success, Najee never lost sight of where he had come from or who helped him along the way: Humility, kindness and appreciation are at the core of his character. His mom had a lot to do with that. “When we were going through our homelessness, I always made it a point to give back,” she said. “I made them volunteer to wrap Christmas presents for homeless people and we were homeless with those families as well.” Najee frequently went to games on Friday night with little or no food in his stomach. The coaches already knew that he would give his lunches to homeless kids. Head coach, John Lucido glowingly said, “When you sacrifice when you’re hungry, that speaks a lot. I know a lot of people who have a lot and never give. But, for this kid, he’s always been that way.”

Najee always has had a soft spot for kids who have gone through hard times. For example, during high school Najee would bring elementary kids to the house. One kid in particular kept showing up every day. Najee’s mom began to wonder why he’s “hanging with these little kids.” So, one day she eavesdropped on their conversation from her bedroom. Najee was challenging the kid to be a better person. “Did you get your butt to school today?” “Did you do your homework?” “Don’t be giving your mama a hard time, I’m not playing with you.” At that point, Najee’s mom smiled and said to herself, “This is my son. I was so proud of him.” He was filling the role as a mentor to kids in the community who, like Najee, didn’t have a father figure to look up to.

Simply put, Najee wants to help people. “That’s what makes me happy.” On holidays he serves food at homeless shelters, he frequently volunteers in the community, and overall he gives back as much as possible. According to Alexis Ramos, a physical therapist, “Najee is very different. A lot of kids his age are into e-sports, ya know being a 20-year-old. He’s more like, ‘Let’s go give back to the community.’ I think that teams are realizing that his character outshines what he can do on the field.”

At the date of publication, Najee has been in the NFL long enough to play five games. Whether he becomes an all-star running back, breaks records, or wins Super Bowls, we know his life will impact others. He has already started a non-profit called, the Bigger Picture Foundation, dedicated to providing food, shelter, and material possessions to those struggling with homelessness. That’s pretty impressive for a 22-year-old just beginning his professional career. He is most certainly a positive role model in the world of sports. I, for one, have become a big fan of Najee Harris and can’t wait to see what he does professionally and personally over the course of his life.

Najee Harris is one of the 144 “Wednesday Role Models” featured in the Student Athlete Program. This program is designed to improve the character, leadership and sportsmanship of high school athletes. To learn more about this program and how you can implement it in your school: