It’s Never too late to do the Right Thing

It’s Never too late to do the Right Thing

I have a friend who lives in a California. She gave up a lucrative career in journalism to be a teacher. She did this because she felt she had something positive to give back to the next generation. She even chose to teach at an alternative education high school because she thought she could make the most significant changes with struggling kids. She’s very talented, generous and noble. She has a bubbly personality, an infectious smile and she is a tremendous mother and wife. In September of 2012, a fight broke out in the hallway.  When she arrived on the scene, one of the boys had his arms raised in a surrender position, so she started to escort him to the office. Unfortunately, the boy behind her decided to take another swing and… connected… with the back of Mrs. Labayog’s head, breaking her eardrum and nerve stem and rendered her unconscious. Along with the rest of her body, her head hit the hard floor shattering her nose and eye orbit. To make a very long story short, she broke her nose,  lost the vision in her right eye and now requires a hearing aid to hear out of her right ear.  Since then, she has endured multiple surgeries, chronic pain, specialists, ongoing therapies, legal battles, disability issues, & high medical costs. The word horrific does not begin to describe this ordeal! 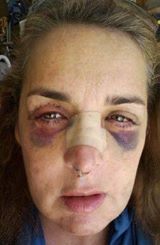 Still, she has a strong desire to get back to teaching. To add insult to injury, someone either took the wedding ring off her finger or picked it up off the floor while she was laying on the hallway floor, unconscious.  It really bothered her to think that one of her own students could stoop to such a low level. The punch probably hit her on accident, but the theft was on purpose.

Over 20 months later (some 600 days), she found an anonymous envelope in her teacher’s box at school.  Inside the envelope, she found a note that read,  “I’m sorry” and… her beloved, cherished wedding ring. “I was so shocked I just cried tears of happiness,” she wrote on Facebook and later wrote, “I am not sure who had this or why they decided to finally return it…but I am so grateful…having that ring stolen bothered me almost as much as the permanent hearing, vision and other injuries I have suffered and getting this back has restored some of the belief I have that people…given opportunity and time….will do the right thing…” 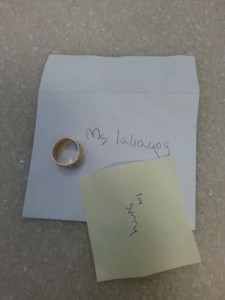 Author’s Perspective: Quite frankly, I can’t say it any better than Mrs. Labayog, so I will not try…and if you don’t get the lessons to be learned, I probably can’t teach them to you. So, as part of your final exam, I will leave it to you to tell me the lessons of this story.

1) What life-lessons can you learn from the boy who hit the teacher? Think of the impact that decision had on Mrs. Labayog, not to mention his own.

2) What life-lessons can you learn from the student who stole this wedding ring? Why do you think this student gave the ring back? Does giving the ring back make up for stealing it in the first place? Do you agree that it’s never too late to do the right thing?

3) When a fight breaks out in school, a parent always says, “Where are the teachers?” Do you think it’s a teacher’s responsibility to break up fights? Knowing this story, would you?