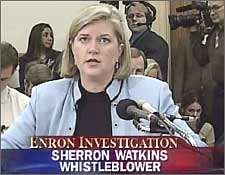 Each year, we ask students who their favorite and least favorite role model is from the book. Every year Sherron Watkins, the whistle-blower from Enron, is the least favorite. The most popular explanation is, “She’s a snitch.” I get it. She broke the number one rule amongst teenagers.

60 Minutes did a story on No Snitchin’ and how that motto has morphed itself from the Mafia to the streets of the inner city to the world we live in. People in this segment basically say that they will not turn anyone into the authorities, regardless of the circumstances. http://www.youtube.com/watch?v=wTwipn-Fp_U

Author’s Perspective: I am pretty firm on this one. It is time to end this motto. In the post 9/11 world and in the era of hyper-responsibility, ‘no snitchin’ just doesn’t work anymore. I will attempt to show this to you by using certain stories:

Penn State: On separate occasions, a janitor and an assistant football coach witnessed Jerry Sandusky sexually abusing young boys. The janitor told another janitor and they agreed to tell no one. The assistant coach told the head football coach… who told the athletic director… who told the president of the university. Because no one screamed what they knew with a megaphone, held a press conference or went to the FBI, many more young boys were abused over the next 10 years!

Rutgers: A basketball coach physically abused his players for the better part of two years. Team managers, trainers, ball boys, custodians, assistant coaches and other players watched this behavior on a regular basis and… said absolutely nothing to stop it. The athletic director saw tapes of the abuse and he put the coach on probation. Other executives at the university saw the tape and did very little or nothing to stop it.

Lance Armstrong: Lance Armstrong won the Tour de France 6 times – all with the aid of performance enhancing drugs.  He cheated and got away with it for more than a decade. There was a code of silence amongst team members, trainers, doctors… This lie only served to tarnish the sport, erode trust and ruin the legacy of Lance Armstrong.

Boston Bombing: Two young men walked toward the finish line with backpacks full of explosives. Seconds later they walked away without their backpacks. Three people were killed and one hundred more were injured – many of whom had their legs blown off.  According to police, the captured terrorist indicated that he and his brother planned to detonate 6 other bombs crowded in Time Square  (New York City). Without the help of private citizens who aided the police in their investigation at multiple points in the man-hunt, who knows what would have happened. New York City Mayor Bloomberg said recently, “We are just thankful that we didn’t have to find out that answer.”

“If you see something, say something,” is the slogan developed by the federal government in response to the terrorist attacks of September 11, 2001. I think this should become the official slogan in schools, businesses, athletics, military, politics, & neighborhoods. Further, “if you see something and say nothing,” you should be held accountable, regardless of your age or title. “No snitchin'” protects the bad guys and hurts the public. It’s time to celebrate the Sherron Watkins’ of the world and time to condemn those who say and do nothing when they see something.

Your Turn (follow us & tweet responses @CDandLeadership using #CDandL):
1) Do you agree, slightly agree, slightly disagree or disagree with my opinion? Why? Use specific examples to back up your position.
2) Talk about how “no snitchin'” impacts bullying, cheating and the use of drugs at your school?