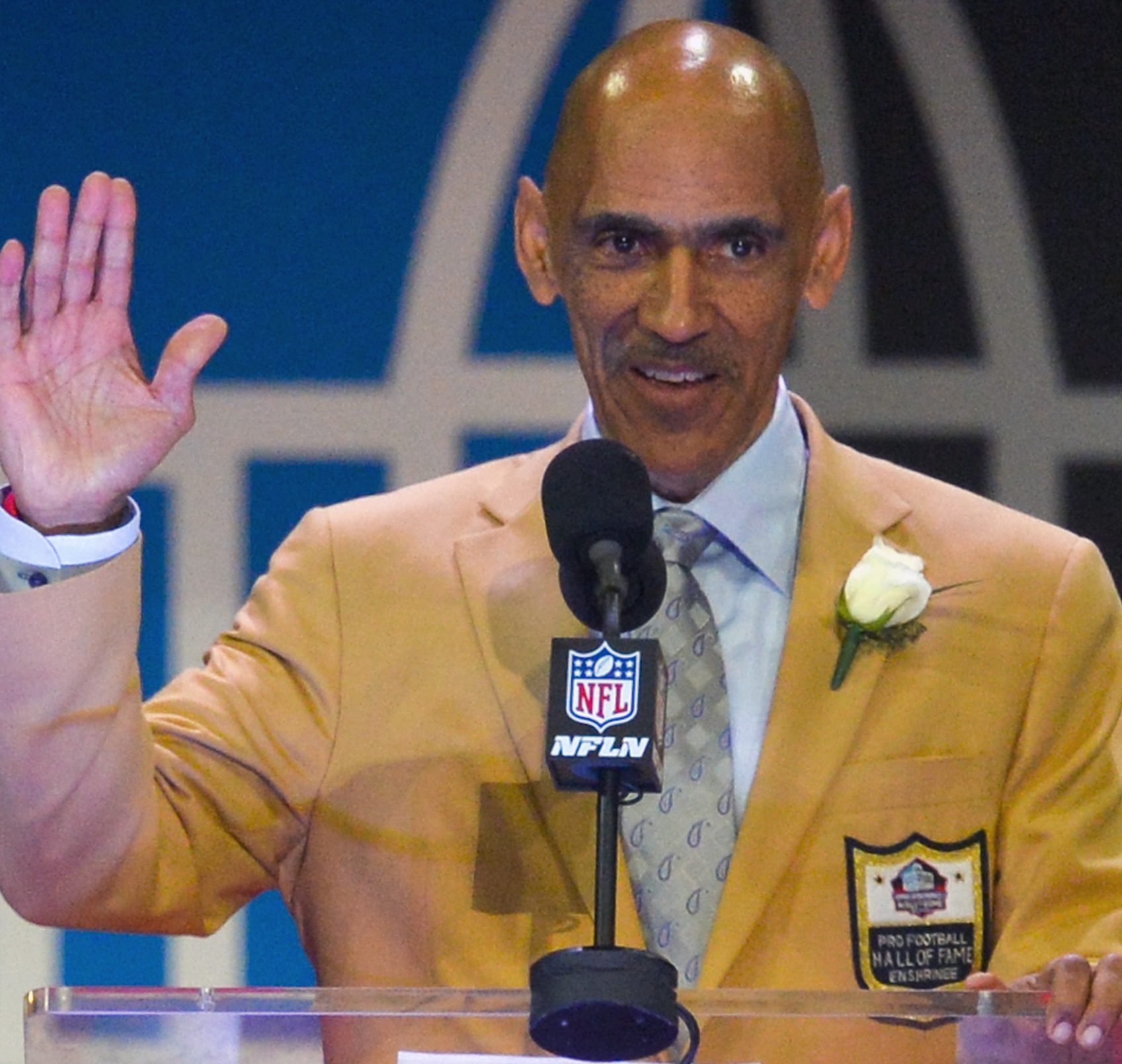 “It’s about the journey – mine and yours – and the lives we touch, the legacy we can leave, and the world we can change for the better.”

Tony Dungy is one of the most respected names in sports. He was a fine athlete, but that’s not why he is on that list. He was an excellent coach, but many coaches achieved more than Dungy. He is respected and admired much more for the way he achieved his success than for the success he achieved. Dungy is a man of high character and he is a tremendous role model.  What separates him from others with similar success can be boiled down to one word – integrity. Integrity can best be defined as an internal set of values that drives every action and every decision.

Because of his integrity, Dungy is often the first phone call made when a player is struggling with life issues. Dungy is the proverbial mentor to these men who have lost their way. For example, after Michael Vick was released from prison for running a “cruel and inhumane” dogfighting ring, Dungy helped him straighten out his life and make a successful NFL comeback. To this day, Dungy continues to mentor young men in trouble.

Dungy was inducted into the Professional Football Hall of Fame in 2016. This honor had a lot more to do with his coaching ability than his playing skills. As a youngster, Dungy was an excellent high school athlete. He lettered in four sports at Parkside High School in Jackson, Michigan. By his sophomore year, he was the basketball team’s star guard and the football team’s starting quarterback. Dungy was an above-average college football player at the University of Minnesota. Dungy became the starting quarterback and team leader for almost his entire college career.  He was voted the team’s Most Valuable Player after his junior and senior seasons and earned several all-conference awards.

By his own account, Dungy admits that he was not exactly a high-caliber, professional player. After going undrafted, Dungy got a second chance when the Steelers invited him to their training camp for a tryout. They subsequently decided to make him a safety on defense, a position that he had never played. Despite the switch, Dungy made the team and became a reliable backup. In his second season, he led the Steelers in interceptions and the team even won the Super Bowl. After that big win, Dungy was traded to San Francisco where he spent his third year as a professional football player. He was traded once again before his fourth year, this time to the New York Jets. Dungy, however, didn’t make the Jet’s roster, and his playing career came to an end at the age of 24.

Dungy is best known as a coach and a leader. He started as a defensive backs coach for the Pittsburgh Steelers. He initially found himself coaching former teammates and several future hall of famers. At the age of 28, he became the youngest defensive coordinator in football. He continued to hone his new craft as an assistant with the Kansas City Chiefs and the Minnesota Vikings in subsequent years. He received an opportunity to be the head coach of the Tampa Bay Buccaneers in 1996 and then he took over the helm of the Indianapolis Colts in 2002. His claim to fame is leading the Colts to a Super Bowl victory in 2007, becoming the first African-American head coach to do so. He retired at the end of the 2008 season, still in the prime of his coaching career.

To fully understand Dungy, it is important to know about the importance of his faith as a Christian. His faith in God serves as the cornerstone of how he lives. Dungy firmly believes, “I don’t have the strength or wisdom to get through a single day without guidance and grace from God.” This faith really defines who he is. Every action and every decision goes back to that premise.

“I don’t yell a lot,” Dungy promised the team at his first team meeting as their head coach. “So, if my voice at this level won’t get your attention, and you believe you need someone to yell at you to correct you or motivate you, then we’ll probably need to find you another team to play for.” Dungy believed in quiet strength. He always treated players with respect and did not get in a player’s face. He believed in clear communication, high expectations, priorities and principles. Dungy never allowed veteran players to haze rookies. He also never swore at his players the way many other pro ball coaches did when angered. “I choose not to use profanity because of my faith,” he said.

Tony Dungy understood the importance of winning. He was a steely-eyed competitor. However, he was wise enough to know that football was just a job. “We expect to win the Super Bowl,” he told his teams. “But, if that’s all we do, it will be pretty shallow.” He expected his players to be positive role models in the community. Dungy expected them to volunteer and make a meaningful difference. In fact, the only documented case of Dungy losing his temper as a coach was unrelated to football. One of his players didn’t show up to speak at an elementary school and another was late for an autograph session. He was irate when he addressed the team that week. He expected his players to be just as accountable for their decisions and actions off the field as they were on it.

Family was and still is a major priority in the life of Dungy. While most coaches like to talk about maintaining a healthy balance between work and family, he demonstrates this through his actions. Dungy openly encouraged his staff and his players to have a life outside of football. “I have always attempted to only keep the staff at the office as long as I felt it was completely appropriate.”

Dungy met his wife Lauren after a local minister continuously urged him to go on a blind date with a member from his congregation. He finally did and several months later, the two married. Together they have five sons and two daughters (two of which are adopted). As part of his balanced life, Dungy regularly allowed his children to join him on the sidelines during the games. One time before an away game in Jacksonville, a security guard tapped Dungy on the shoulder and said, “Coach, I’m sorry but your son can’t be on the sideline,” referring to 11-year-old Eric. Dungy and the security guard tensely argued for a few moments before Dungy finally said, “He’s staying here with me and if you remove him from this sideline, I’m taking my team to the locker room where they’ll change and then leave on our buses. You can explain to Wayne Weaver (the Jaguar owner) why he’s refunding everyone’s money.” That seemed to settle the argument.

It is clear to see from his actions how important family is to Dungy. That’s why it was especially difficult when one of his sons, Jamie, committed suicide a few short days before his 19th birthday. Dungy and his wife were devastated. The man who volunteered on behalf of the National Fatherhood Initiative, All Pro Dad, and countless other family-oriented organizations had lost a son. Dungy mustered the energy to speak at his son’s funeral and imparted some sage advice, “Parents, hug your kids every chance you get. Tell them that you love them every chance you get. You don’t know when it’s going to be the last time.” True to who he is, Dungy believes that his son’s death is a part of God’s plan. “I believe then, and I believe now, that God is in control of everything.”

Dungy soon returned to his coaching duties, renewing his efforts to push the team to reach its potential. A few years later, in 2007, he did lead the Indianapolis Colts to a victory in Super Bowl XLI. He joined a very small fraternity of men to win a Super Bowl both as a player (1978) and as a coach (2007). Dungy would coach one more year after that and retire from coaching.

The lasting legacy of Tony Dungy is his integrity. Dungy continues to be the consummate role model. At the end of one of his books, Quiet Strength, he shared this inspiring thought, “We are all role models to someone in this world, and we can all have an impact – for good.  We can all change the course of our nation and world, one life at a time, for the rest of our lives.”

Tony Dungy is one of the 144 “Wednesday Role Models” featured in the Student Athlete Program. This program is designed to improve the character, leadership and sportsmanship of high school athletes. To learn more about this program and how you can implement it in your school: