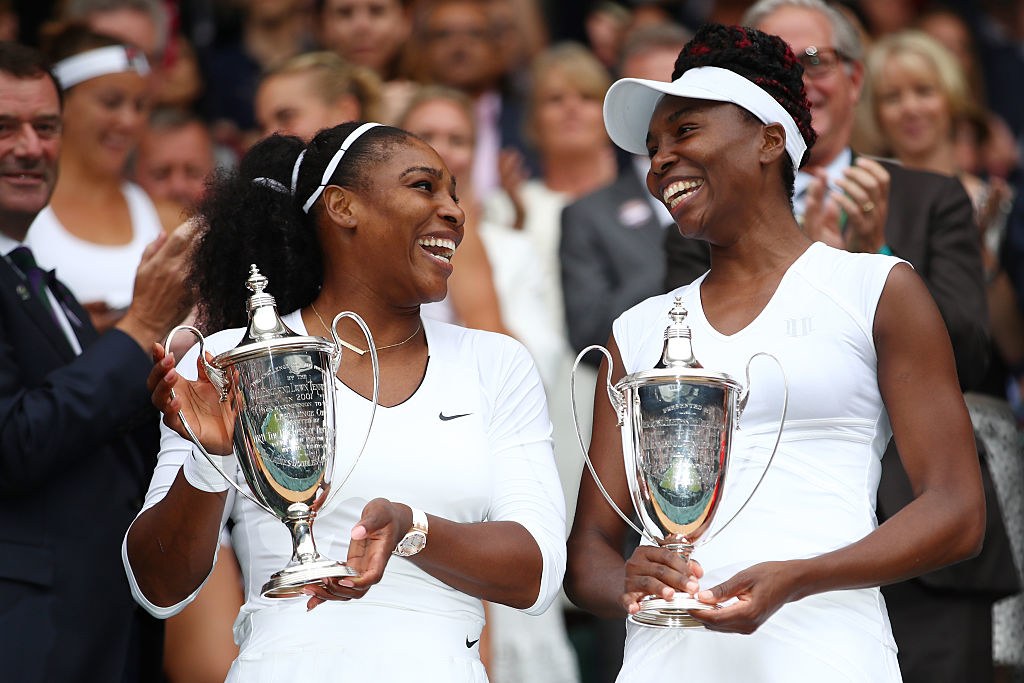 “I am lucky that whatever fear I have inside me, my desire to win is always stronger.”

In 1978 Richard Williams watched the finals of the French Open. He noted that the woman’s champion, Virginia Ruzici, took home a sizable check along with her trophy. Something stirred within him. Richard developed a 78-page plan to teach his daughters to become tennis champions. It was a strange plan indeed. He first had to teach himself this unfamiliar game of tennis by watching videos and taking lessons from a man nicknamed, “Old Whiskey.” Next, he decided to marry his long-time girlfriend, Oracene Price, and bring a few more girls into the world. This was accomplished when Oracene gave birth to Venus (1980) and Serena (1981) in Saginaw, Michigan. The final piece to this plan was a cross-country move to the ghetto of Compton, California.

When Venus turned 4 and Serena 3, Richard began to execute his plan.  He scavenged used tennis balls from posh Los Angeles country clubs.  Then, each morning, he would pull up to the cracked public asphalt courts in Compton with his grocery carts full of balls and his daughters in tow. He would sweep the broken glass and drug paraphernalia off the courts before each practice. Drug dealers and gang-bangers would curiously watch the Williams’ sisters practice six days a week. As Serena later said, “If you can keep playing tennis when somebody is shooting a gun down the street, that’s concentration.”

At first, Venus appeared to be the chosen one. She earned the number one ranking for 12-and-under players in Southern California. Her little sister, Serena, would not be left behind. By her own admission, she was a copycat. “What didn’t I do to copy Venus when I was younger? Her favorite color was my favorite color. She wanted to win Wimbledon, so I wanted to win Wimbledon,” Serena said. “I was never supposed to be good. I was never the one who was supposed to be a great player. I was a copycat basically.” Serena, the copycat, was ranked the number one 10-and-under player in Southern California.

Richard told anyone who would listen that his daughters were going to be champions. Most people thought he was crazy. After all, tennis was a white-dominated sport. To think that two black girls from the same family would be dominant players sounded far-fetched. In response, Richard invited a top junior tennis coach, Rick Macci, to watch Venus workout. After one hour, he said, “Richard, you’ve got the next female Michael Jordan on your hands.” Richard responded, “No, I’ve got the next two.”

Then, Richard and Oracene made another unconventional move. They pulled their daughters out of all junior tennis tournaments. In so doing, the parents accomplished three major goals: (1) the young superstars would remain grounded and focused on school, (2) they avoided the stress of the junior circuit and the “burnout effect” and (3) the parents protected the girls from the racist remarks that the family sometimes overheard at tournaments. Instead the family moved to Florida to receive professional coaching. The sisters honed their skills during practice against one another, rather than on the competitive stage.

At the age of 14, Venus turned pro and played in her first professional tournament. She won her first match and took the first set from the world’s number one player in her second match, before losing the match. The following year, Venus signed a $12 million endorsement deal with Reebok. Serena followed the next year with a lucrative deal with Puma.

These retail companies could see the revolution coming. Venus and Serena simply hit the ball harder than other female tennis players. They could hit winners and track down balls from seemingly anywhere on the court. They were also ultra-competitive, possessing what can only be referred to as grit, an iron will to win. These sisters were ushering in a new, more powerful game of women’s tennis. The players on the Women’s World Tour would have to raise their game if they were to stay competitive.

Once the Williams sister got going, nothing seemed to stop them. They were a potent one-two punch. Venus was the first sister to win a professional tournament in 1998. The very next year 17-year-old Serena captured the U.S. Open, winning the first major title. Then in 2002, Venus became the first African-American female to secure the number 1 ranking. Serena went on to hold the number one spot for 186 consecutive weeks (319 weeks overall in her career). Venus won an Olympic gold medal in tennis singles in 2000, and Serena followed in 2012. They won the Olympic doubles championships in 2000, 2008 & 2012.

In tennis, a person’s career is defined by how well they perform in the four major tournaments every year: The Australian, French, and U.S. Opens and Wimbledon. Venus, the older sister, has won 9 individual titles. Serena, the younger sister, has won 23 individual titles. At two separate times, Serena has held all four titles simultaneously (2003 & 2015), the so-called “Serena Slam.” Venus and Serena also have teamed up to win 14 doubles championships in these four major tournaments.

When Serena was 12, she was asked what it was like to compete against her older sister. Her response was, “It was awful.” The two are best friends. For much of their adult lives, they have lived together. They vacation together. They went to high school and college together. It must be extremely difficult to continually compete against the person you love most in the world for tennis championships with millions of people watching.

Venus spent much of her young life routinely beating her younger sister. Venus was stronger and taller. Early on, Venus beat Serena to win two grand slam titles. However, in 2002 the rivalry swung in Serena’s favor. The copycat little sister grew up and became a champion. They have played against each other in nine major championship finals, with Serena winning seven. In fact, Serena holds a 19-12 record vs. her older sister. Some say the difference is more attributable to their differences in personalities than skill level. While Venus says, “My first job is ‘big sister’ and I take that very seriously. I look out for her and want the best for her.” Serena never had to worry about such things. She is more apt to make comments like, “I just never give up. I fight to the end,” or “I always believe I can beat the best, achieve the best. I always see myself in the top position.”

The truth is that Serena is the obvious choice for grit. She is widely considered the best female tennis player of all time. She seemed to want it just a little bit more than her sister while Venus focused more on her external businesses. It can be said that Serena is “grittier.” However, the truth is, the two are so inseparable that it seemed impossible to write about one without writing about the other. They are both phenomenal competitors and they both demonstrate many positive characteristics that make them exceptional role models.

Family and living a well-balanced life are important to Venus and Serena. They were wise enough to understand that tennis is played for a short duration. Serena said, “Tennis is just a game, family is forever.” While in their early twenties when they were both multi-millionaires, each went to college to earn a degree that would help them establish a career outside of tennis. They learned to speak foreign languages. They became entrepreneurs. Very few individuals have established better international brands than the Williams sisters. “We’ve always had things to fall back on,” Serena said. Venus added, “One of our biggest fears is to become a statistic.” Given all that they have done to create success in so many realms, becoming a negative statistic seems unlikely.

Serena and Venus Williams are two of the 144 “Wednesday Role Models” featured in the Student Athlete Program. This program is designed to improve the character, leadership and sportsmanship of high school athletes. To learn more about this program and how you can implement it in your school: